I’m looking at picking up a table for my X-Carve, and would like some input. It will be stored in a shed with concrete floor, metal roof, but some ventilation under the eaves that is open to the outside. Rain can’t get in, but living in GA, humidity fluctuations are to be expected.

I am looking at this table:

The main concern is the particle board top, but the fact that it can be easily replaced is appealing. Do you guys think that would be a problem? If so, what would you recommend for replacement or treatment? Or is this just a bad idea altogether?

The other option I have been exploring is to get a dining table with a solid wood top like this: 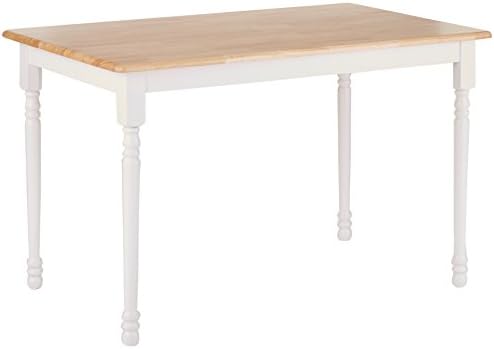 Find the biggest selection of Tables from Coaster Home Furnishings at the lowest prices.

I would probably find one with beefier legs or replace them, but having had that style before, I know the top is sturdy. Do you think that would be a good option?

I don’t see a problem with using the particleboard top if you were to put a few coats of poly or some other sealant on it, especially on the end grain. As long as you don’t plan on doing a bunch of work on it that would damage the finish (and thereby allow more humidity to reach the wood), I think it’ll be more than good.

If you’re worried about it eventually sagging, you could glue/screw on a second top of plywood, 2x4’s, or any other material. That would also make it stiffer, which would make it more stable for the X-Carve.

Thanks Guys. That really helps put to rest my worries about the particle board. I went ahead and ordered it. I’ll probably coat it as you guys suggest just for good measure. Can’t hurt.

@RobertA_Rieke The unoccupied work area will probably be mostly used for assembly and staining, so hopefully won’t see a whole lot of abuse. I was concerned about sagging, but one of the reviews states that there is a cross member somewhere under there, so it sounds like it should be pretty well supported. We’ll see though.Thanks for the tips.

@AngusMcleod That’s a good point. Even if the top does go south, what’s left should make a more than reasonable base for something new.

This worktable from Harbor Freight was found to work well for a stock size machine in the SO2 days: http://www.harborfreight.com/adjustable-height-heavy-duty-workstation-46725.html

Another option is to put a layer of resin coat over the particle board top. That will completely seal it from the elements and provide a solid base.