Anyone know anything much about Ohio Forge table saws?

I just went to look at one from Craig’s List. It has a cast iron top, fence clamp, and miter, and not a bit of significant rust on any of it (one small can ring is all I found). The guy said he would spray it with silicon after each use. It runs pretty quiet and strong. Don’t know much else about it really, but figure if he, retired finish carpenter, has taken that good care of it for 25 years, it must be doing ok.

I just did a Google search for the name since I’ve never heard of it, and from what I found, it’s a cheap brand that Home Depot used to sell several years ago before the Workforce brand. The reviews I saw for Ohio Forge weren’t all that great, so I would say if the price is right (very low), then I would at least take a good look at it. But if you’re willing to spend a little more $$, I’d go with a more trusted name brand.

Thanks for having a look.

Are you looking at reviews for the old style says or the newer ones? This one is very similar to the craftsman 100, but with a different housing.

What would you consider a good price?

The reviews were mainly for the “newer” ones, about 10-15 years ago. If it were at/under $70, and it still functions appropriately, I would consider it. Do you have a link to the craigslist ad?

Chances are a new belt and blade and it will be great. What costs money on a good table saw is the fence. A couple low cost upgrades are the new style belts and a weight for the blade. If the top is in good condition, chances are you can make a great saw from it, with a lower price of entry.

Do you have a link to the craigslist ad?

I don’t. I bought a scroll saw and a couple other items from the guy so he said he’d hold that one for me until next week so I could mull it over. It’ll be raining most of the week , so no most people wouldn’t be able to pick it up until then anyway. He took the ad down.

Here is the same model saw. The top on the one I am looking at is in fairly similar, but better, condition, and the stand on the one in the link below is much worse: http://www.liveauctionworld.com/Ohio-Forge-Table-Saw_i23892114.

The guy wants $130 for it, which is probably a little high. I’ve seen similar Craftsman saws for around $100, but none around where I live (town of 105 people). Most have been over an hour away. By the time I factor in my time, trouble, and gas to get that price, it seems worth an extra $50 to just get one located 20 minutes away. That’s why I am thinking this may not be a bad deal even if it is higher than what one may find in a more populated area. I just don’t know much about the brand.

If the top is in good condition, chances are you can make a great saw from it, with a lower price of entry.

Thanks. The top is in great shape. The whole thing is really.

A used but well cared for tool is worth more than most Craiglist table saws. My concern would be availability of repair parts and if any components, such as arbor and miter slot size, are standard. As mentioned the condition of the fence is important, as would be the ability to make adjustments to the saw blade angle to bring everything into tolerance. More recent saws have better dust collection.

I recently purchased a used Craftsman table saw, model 315.228390, for $200. I took it apart cleaned and did some paint touch up. Replaced the belt and blade. What I liked was the optional cast iron wing with under table router mounting. It didn’t come with a miter gauge which is going to cost me at least $50. I could have purchased a new low end saw for the same money.

Another good source for deals is the Sears Outlet site. There is a brand new Rikon 14" Deluxe Bandsaw at my local Sears for $509, the local Woodcraft is asking $900 for the same bandsaw. 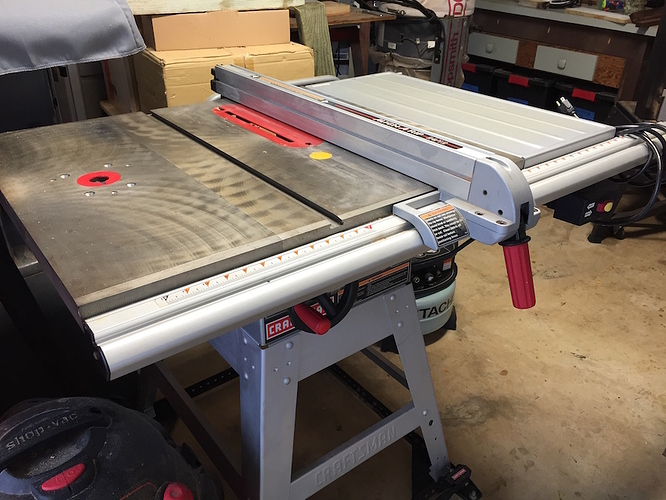 Did you get a manual with the saw? I got a 668-575 and have looked everywhere for a manual with no luck. If you did could you help me out with a few pics of the manual? cj6078@charter.net. Thanks,
CJ