I’m having issues with Tabs. I select tabs in the settings (i sized them as i need) but in the detailed preview, they area missing. I do notice that they are there on the left screen, but on the right, they are totally missing. I thought i was missing something, but when i did a complete carve, my piece did not hold up at all. tabs just simply not there. Am I gonna have to use the tape/glue method to hold piece down? I did a update today before i started to day as well. Please help!!! Much appreciated.

My tabs don’t show up in the detailed preview either. I don’t think they’re supposed to show up. As far as them not cutting, what are you setting the size of the tabs to?
So far I have just left the size to the default setting and I haven’t had a problem with them.

Did you measure the thickness of your material? Maybe you are cutting right thru them.

thanks for the quick response. Yes, I’m cutting out solid shape out of 1/2" mdf. I’ve never had this issue b4. even though i’m completely cutting out the shapes, the tabs should still be hold the piece in place. I even made the tabs .50" long & .125" thick.

I jsut checked an item i ran a few days ago and you can not see the tabs in the preview on it but it left the tabs. If you have them set the the size you say you should be able to see something in the prview. It should show a long stretch where it is not cutting all the way thru. 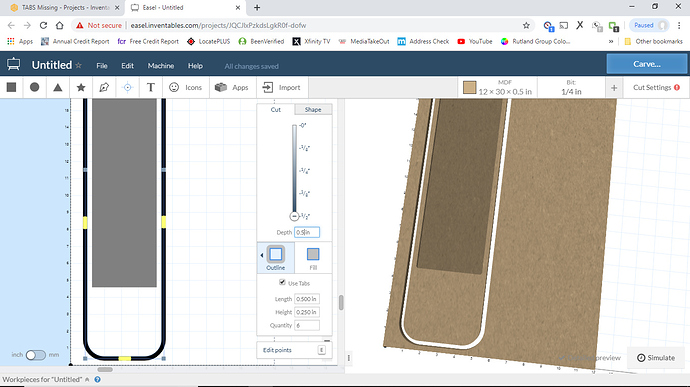 I changed mine in the file i have to the setting you have anf same thing you can not see the tabs in the preview. Did you measure the material with calipers? I cut a lot of mdf and it ussually is not 1/2".

Is it cutting into the waste board?

i just barely went into the waste board. I do use caliper for measuring. that shouldn’t effect the tabs setting i don’t think. Im my material is .50 &I my cutting depth is .50, then tabs should still be there. I’ve had my xcarve for over 2 1/2 years & this is a first for me. I’m at a loss!!!

You might be right but if your material is .480 it will go far enough down to wipe the tabs out. Are you using a touch plate to setyour z axes or doing it manually?

Well i would say after 2 1/2 years i am sure you can get it close. The only thing i can think of is the material thickness. When you ran the program did you see the z axes go up and over the tabs?

actually i didnt if Z moved up & over, but i dont believe it did. I didnt notice anthing til i heard a grinding sound (PANIC) (LOL) cause i had looked away. when i did look over, the piece had shifted & the bit was digging into the piece because nothing was holding it in place.

I’m probably just gonna go w/the tape & glue hold down method just to be on the safe side until i can get the tab thing situated.

I hear that. That would be one way to check it is if you could run it in scrap or draw something small up and see if it lifts up for the tabs. If it lifts like it should but cuts the tabs off there is a problem with the thickness.

I’ll chk it out in the morning. Thanks for all our insight. Have a good evening Wayne!

No problem. Let me know what you find out.

I sure will. but im willing to bet that its something to do w/the software update.