Have been seeing this issue on my last few attempts at making fill cuts. The bit is changing depth rather inexplicably. I checked for correct calibration in all axis, and everything seems to be in order. I had just resurfaced my spoilboard using a fill cut with no issues. At one point the bit plunged all the way through my work piece and spoilboard to continue cutting. I’m new to the machine so I don’t really know where to start troubleshooting. 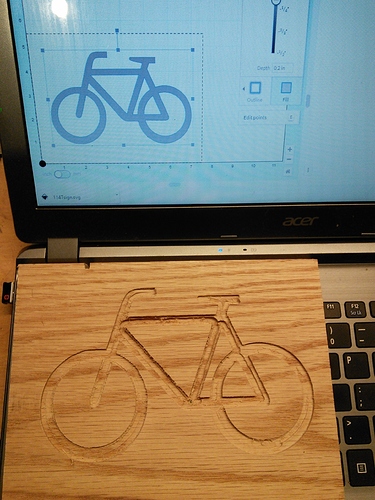 Double check the grub screws on the z axis pulleys and the nut on top of the acme screw.

I’ll be sure to check that (and thanks for the suggestion!) but I’m unsure if this is a hardware issue. When I was running a previous cut, it plunged through the work and entirely through the spoilboard - that’s over an inch deeper than the specified depth. That’s a hell of a lot to excuse as machine slop. I’m suspecting this has more to do with bad g-code or control. If you look at the cut, there are portions that are deliberately cut to an improper depth.

Also, perhaps check your collet tightening? Is it possible that your Z was at the correct depth machine-wise, and an up-spiral bit worked its way down out of your collet to change the depth of cut?

For good measure, I’d also check your wiring. Not too likely to be that, I haven’t seen that causing over-depth cuts before, but it’s a good check any time you’re getting weird behaviour. Just grab your multimeter and make sure you don’t have any shorts or cross-connections in your wiring from end to end.

When the bit plunged down through the work piece, did the whole spindle move down, or just the bit?

Also, perhaps check your collet tightening? Is it possible that your Z was at the correct depth machine-wise, and an up-spiral bit worked its way down out of your collet to change the depth of cut?

That was my first thought too.

I’ve had a loose bit very quickly go down into a project. I had hand tightened it, and usually move the bit into position, loosen the collet to let the bit fall to rest atop the project, and then tighten it with the wrench. I just forgot to do the last part. Once the collet came loose, the bit started ramping lower, and before I knew it was a half inch deeper than it should have been.

I stand corrected - there was some looseness in the grub screws for the z-axis belt pullets, and quite likely I was going too aggressively on my depth per pass, which makes it easy to see how the entire z-axis carriage could start to ride up and cause an uneven cut depth. I ran a few test cuts afterwards, and started seeing much more predictable results. I’ll give the entire machine a once-over of tightening just to make sure next time it’s in front of me.

The deep plunge on the prior cut is still a confusing one to me, though. The entire spindle plunged through the work and the spoilboard, it wasn’t just the bit slipping out of the collet. I was also having issues with the machine disconnecting from Easel when I was setting up for my cut during that session - could that have been the cause?

Thanks for the help, this community is fantastic!