The use of vcarve on x carve help

Yep, that’s what I do too. The project I’m about to run uses three tools; when I go to save off the gcode files, I just group all the toolpaths for the same tool together, and then I just run the files one after another.

So being new, what is the post processer used for. And for v carve pro I need to download a universal g cde sender

The post processor is what creates gcode specific to the CNC controller. For the X-Carve that is Grbl.

Once you have loaded the post processor into your “My_PostP” directory Vcarve is smart enough to select it automatically for you every time you save a gcode file (“Save Toolpath”).

It is The “Universal Gcode Sender” which can be found here http://bit.ly/1hftIhy

UGS will do a good job of sending your gcode file to the X-Carve.

So I started a project, it acts like it’s going to work but carve an inch over the board then alarms out. Says something about null. When I use easel it works perfect.

I had that problem with UGS 1.8 and never figured out what the heck the computer was talking about with “null”. I downloaded the nightly build of 2.0 some time ago and havent had a problem since.

I have UGS 1.0.7 running fine on my Windows 8.1 laptop, But when I try to open UGS 1.0.8 I just get some cryptic error messages from Java and it fails to open. I was able to get 1.0.8 running on my desktop Windows 8.1 system (that is not connected to the X-Carve) so I know it works fine with 64 bit Windows 8.1. I just have no idea why it fails on the laptop. I tried removing Java and reinstalling the latest version of Java and it still gives me the same error message. Has anyone else had…

sounds like either your using the wrong post processor OR the one you are using needs some editing. If its doing what mine did its throwing the null error because of a tool change command at the beginning of the file. take out the T1M6 command and it should be ok

I got it working, switched from xcarve processer to grbl. Worked beautiful 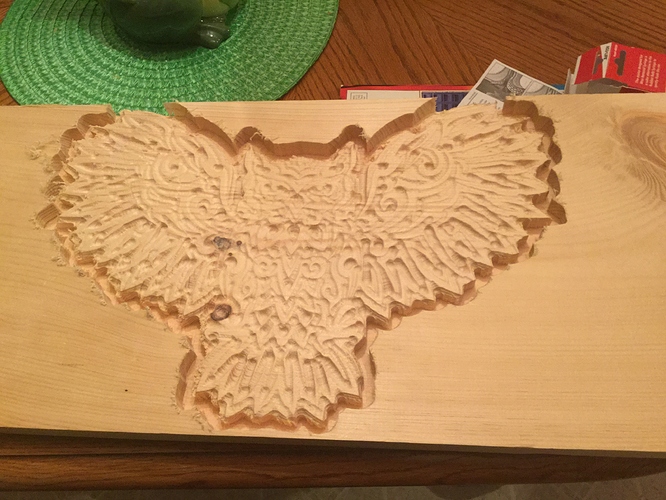 This may seem obvious to some… but do you position your z with tool tip touching before you send the gcode? Like in easel? My tool has gone wildly off course a few times plunging way into waste board. Toolpaths ive sent from aspire look perfect, but i have yet to successfully carve anything using ugs. Easel works fine.

Hi @Frosty, here are the steps I use with success. I zero the X and Y axis and hit Rest Zero in the UGS interface. I then, if necessary, move to a spot on the material that I want to zero against and place a thin piece of paper or plastic in the top of the material. I lower the Z until I the space between the bit and the material is close enough that it just slices paper when being pulled out. I then note the Z height in the UGS UI, move it to 0 on the X, Y and then reset Zero again to ensure you have all the X, Y and Z at zero before picking up the file the G-Code in it. Hit run and you should be good to go.
I just purchased a touch plate which will make the Z axis zeroing more accurate but that is this weekends challenge.
Hope this helps you.
Oh and one other thing. I always use all inches in my Aspire and G-Code post processor. In UGS I leave in in MM when jogging the AXIS, I find if you do use inches in that UI you need to go back to MM and jog something otherwise you get crazy results.

excellent response, in terms a noob can understand thank you very much! I have found that i can do all my vectors in aspire then import the svg, which is very handy imo. since easel is kind of lacking in that department.

I am in pre-sales research mode, and need to know the same. Did you receive any answers on this? Also, what is “Post-Processing”, is it like a “Plug-In” for external software or something?

I really wish that Inventables would make more videos to clarify and update old ones… we shouldn’t have to be junior engineers, or software developers, simply to hobby on making other projects which we are focused on… Engineering, testing, debugging isn’t for everyone.

Ahhh… so, it functions fundamentally in the same way as a standard “Printer Driver”, then I take it?

If so, do the cutter options to send to the Post-Processor and cutter show up 3D party software to recognize the g-code and cutter?

Interesting indeed. I suppose that I expected 3D Subtractive terminology would be more aligned with Additive.

This stuff is going to break my Brain. LOL

I wish that they would post clear videos on the matter.

Just for kicks (and maybe to confuse you just a bit more?)

An analogy I use is your design software saves the g-code in a generic fashion. Lets call this the kings english (british) language.

A specific machine may understand most of the file, but does it’s best with a southern american drawal. some bits are lost in translation and the machine acts unpredictably when the appropriate “y’all” isnt applied at the appropriate time and the speech itself is too proper overall.

The post processor works like a universal translator, putting the correct inflections to what the xcarve “hears” so it knows what to do and when to do it.

But then again I may be off base altogether. I’m any thing but totally literate about alot of what goes on with this wonder gadget in my shop…

As mentioned above, I always kinda thought of the post-processing in the same way as the printer drivers we use for our printers.

Except of course in the CNC world, we need to have a post processor for metric, and another separate one for imperial units…

Each set of software will have its own various ways of teaching the user. It is on the different software creators to guide its users in this way. Vectric has a lot of great video tutorials on how to produce V-Carving tool paths… there are also post processors for X-Carve for Vectric software. Go take a look at their videos and see if the videos are what you are looking for.

That’s ok… it’s an analogy that I can comprehend… Unfortunately I am no engineer, and my “Maker skills” are as of yet, quite wanting. LOL

Every expert was once a beginner, We all came into this world pretty much only knowing four things, eat sleep, scream and poop.

Does anyone have a full set of tool settings for vcarve that match the bits that inventables sells? The default tool set in vcarve is meant for larger machines, higher rpm and feedrates. I’m not an expert at figuring out these settings for a colt router running on a 1000mm xcarve…