After messing around with my new XC 1000mm for a week or so, I got tired of the gantry flexing and various alignment issues. So I’ve started work on the “Minus”, so named because I’ve gone taken my Makerslides to the tablesaw and trimmed them up a bit. Here’s what I’ve done so far.

I’m starting to put it all back together now and will incorporate a few more changes as I go. I want to run the sub-frame slides directly under the Y axes, like @AngusMcleod had shown in one of his posts on stiffening mods. I will connect them together (somehow) so that the Y axes slides can’t deflect anymore. Once the machine is running again, I’m going to try to mill out some new end plates out of 1/4" aluminum which will incorporate a couple more stiffening mods.

I took pictures, but I need to trim and crop them before I can post them. Will keep adding to this entry.

Trimmed the Y-axis slides 2 mm to eliminate the 2 mm gap between the X and Y axis subframe slides.

I was surprised when I saw this gap, the whole assembly was so smooth… until this.

Ok, so today I got up with the idea that I’d make a couple t-slot nuts and then go about putting the XC Minus back together. Well, I obviously underestimated the amount of work it would take to make 50 t-slot nuts. Suffice it to say that they’re done, but nothing else is. I did learn along the way that the Diablo Steel Demon saw blades work pretty well on angle iron, but they won’t last very long. Oh and word to the wise, $25 for 50 t-slot nuts from Inventables is cheap, real cheap. In my defense, I wanted them “now”, but I won’t be making any in the future, that’s a promise.

$10… damn! That’s like a knife directly in the kidney. lol Still, I did get to spend 6 hours of quality time in the workshop and was able to get reacquainted with my bench grinder.

Made progress on the reassembly of the XC. Hit a few slow downs related to the rework.

The Minus is getting closer to being at full functionality. I decided that it would only be appropriate for it
to be responsible for making some of its own stuff, kinda like making your dog carry its own water on a hike. So I co-opted it into making some aluminum Y-Axis supports, these to be exact. Have I mentioned that I’ve never machined aluminum before? Boy, what a learning curve! Making 8 of anything gives you plenty of practice though, and I can make one of these in about 35 minutes now, instead of the 1.5 hours it took me the first time. And I only broke one end mill and made another into a welded aluminum mess along the way.

Once I have these done and installed, it’s time to address the wasteboard for real. 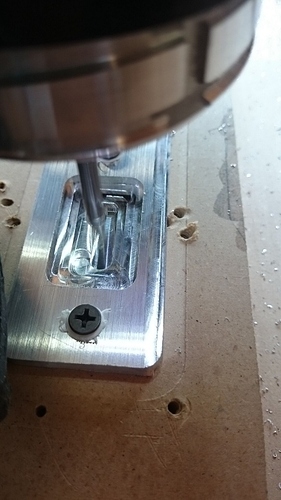 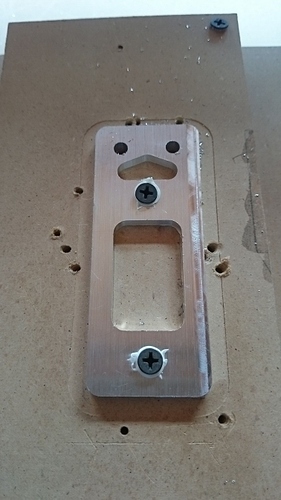 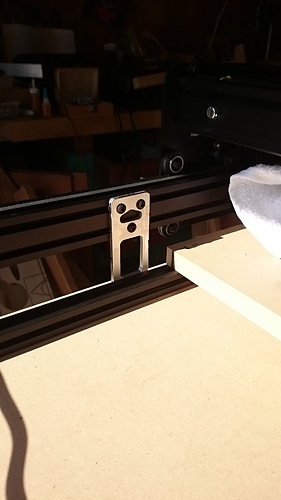 I believe I have a pseudo-torsion box base now. If not, it’s at least stiff and heavy. Pulled one of the power wires out of the Arduino box by accident, so need to fix that now. Also noticed that carriage has a little play in it, so might install the new eccentric spacers I bought along with a locking M5 nut.

I have to say that I’m looking forward to having this thing put together and doing something useful. I’m a big fan of Inventables and this forum, but here is some pointed feedback for you.

A - The stepper motor and homing switch wires should run into some real connectors.
B - The fan wires… do I even need to say anything about those? There are better ways to manage those - there has to be.
C - The power leads for the Arduino should go into a barrel connector, like what’s already on the Uno now designed exactly for that purpose.
D - Consider selling a real enclosure for all of this mess, one that I can bolt everything into, plug the stepper wire connector into on the outside and that I can bolt onto my support table somehow. I mean seriously, what was the intent here? It’s just awful.

I’m totally willing to give you a pass on the v-wheels and eccentric nuts. They’re a good idea that just doesn’t work out all that well in practice. Thankfully it’s fairly easy to make them work better without a bunch of re-engineering.

As I’ve mentioned before, the quality of the Makerslides, motors, steel bits and odd pieces is all great. I’m just kind of annoyed that A) it requires so much tomfoolery after assembly to make it work properly and B) that I have to assemble it completely in order to ascertain all of the shortcomings.

Sorry for the rant, but I’ve just spent another full day screwing around with tuning and upgrading, which is NOT how I wanted to spend it. And before someone writes to me an blows smoke creatively up my posterior about hobbyist blah blah blah, take heed. Bad design is bad design. I’m not saying the X-Carve is a bad design overall, but I am saying there are flawed aspects to the design. The same topics keep coming up over and over on this forum from new users. That by itself should be a clear indication that some revisions are needed.

Pictures forthcoming when I complete the next round of steps in my ongoing fustercluck.