The xmas build is on 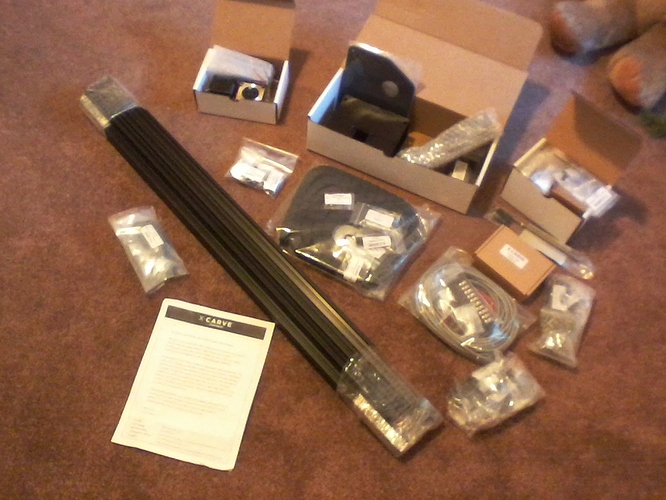 good luck and have fun!

Building the machine is fun! Enjoy!

Take your time, mine went together with little hassle. The online instructions are good and they respond quick if you have questions.

Building was a very enjoyable experience. I got myself in the frame of mind well before it arrived, that I was going to be patient and have fun. Rome wasn’t built in a day but I was more patient than I normally am.

doh! I only received 4 of the 10 M4 nylock nuts in my drag chain kit… no worries, I can pick some up down the street tomorrow.

…no, my makerslide did not come tapped like some have been for others lately.

[EDIT] PUBLIC SERVICE ANNOUNCEMENT: DO NOT TRY TO USE THE SELF-TAPPING SCREWS WITHOUT LUBRICATION! (you will hate your life, hard)

I tapped mine use a little water or WD40 best think I could have ever done, I just have to finish the electronics and I should get to trial run. I am a little nervous of the computer part of it. Have fun.

I did the same when I added the steel bar for the stiffening bar, tapping the holes made assembly a breeze.

Funny thing, my dad was a CNC machinist and passed away this last Easter. I was at his house digging through a bunch of his shop ‘leftovers’ after everyone else got all the good stuff, and one of the things left was a very thorough tap and die set… My stepmom kept asking if I wanted it, and being that I am more a computer guy I just said, “I don’t think I’ll ever be tapping or die’ing anything.”

Putting the 2nd Y plate onto the other end of the makerslides was horrific, and it got to where I wasn’t sure I had the strength to get the screws all the way in, and it just seemed like they didn’t want to budge. I didn’t use any lube on the first Y plate side of the makerslides, but managed to brute them in anyway without ruining anything, but that 2nd side was a nightmare. When I had to put in the screws with the washers on that Y plate I grabbed some machine oil, put a drop on each screw and it must have been 10x easier after that… I did the rest of the makerslides with a drop of oil on the screw like that and it was a relative piece of cake.

I don’t know why I thought I would be just fine without oil, maybe I wanted the exercise in physical strength and patience? Masochist? Who knows. But for the love of everything good and true on this planet, if whoever’s reading this is about to build a machine, please use oil if you are going to use the self-tapping screws. I used a little bottle of machine oil, but I’m sure anything is better than nothing.

Today I will be starting with the belting!

I think I got a blister in the palm of my hand if I remember correctly.

please use oil if you are going to use the self-tapping screws.

I think I got a blister in the palm of my hand if I remember correctly.

Mine went fine with a few drops of cooking oil, plus a rag on the bar thingy that I screwed them in with.

If you ordered the tool kit, you should have a drill bit.

I am a machinist and I used a battery drill, oil and a tap. No worries at all.
But none of this is really new to me just different.
Remember that we are all getting in on the ground floor and cutting edge.
Some kind of lubricant is necessary for forming the threads unless one likes to break taps or seize screws.
Also keep them as straight as possible.

I was a tool and die maker for over 20 years, I used wd40 and a Dewalt impact driver. When I used to tap many holes making blister molds I would just use water.

I tried it by the book first, but after much pain, i ended up getting the res of them started with a t25 driver then used my drill and a bit the rest of the way. Mo’ bettah.

If you ordered the tool kit, you should have a drill bit.

I got the tool kit but all I got was a T25 Screwdriver (actually a security torx to boot!), no bit?
I went and got a Torx bit, but it wouldn’t have been that much more to include one…