These are my Completed Assembly Notes

I finally got my X Carve completed and a test cut made.

It fired up on the first try, absolutely no issues with any of the motors, switches, spindle or electronics.

I did a few things slightly differently than in the instructions, and I think it’s part of what helped with my success, so I’m going to share my notes here for people who haven’t put theirs together yet:

• Tapping the holes in the Makerslide
I used a bit of WD-40 and a T-25 bit in a fat-handled screwdriver to get each screw started, then switched the bit into a drill on super-slow mode and went about 2-3 new rotations at a time, backing it out each time. You’ll feel when it’s cutting vs. when it’s not. It took about 20-30 minutes to cut all the threads, but after that, assembly was a breeze. Just be sure to use a rag or paper towel with some soapy water to clean the WD-40 off the Makerslide pieces so that the belts don’t pick any of it up.

•Leveling/Tuning
I did this on each axis as I went, so I didn’t really have anything much to do but double check it when I was done. I also did it differently than the video shows. Instead of leveling the work area to the table, I used a caliper and checked the distance from the bed to the Makerslide across the X axis, and then at each of the 4 corners of the Y axis. Everything checked out. Honestly, there wasn’t much room for play in the holes they made in the end pieces. So if there was a large discrepancy I don’t know how I could have fixed it.

• BEFORE YOU CUT THE WIRES
Know that they only send you enough wiring to get just to the outside of the drag chain. There’s very little slack. I found this out the hard way.
I would recommend going to Home Depot and buying some 18/4 and 22/2 shielded security wire. The 18/4 is for the steppers and the 22/2 is for the homing/limit switches. I personally bought 30’ of each, and I ended up with enough extra to have the power supply about 4’ from the work area. If you don’t cut the stepper wire that comes with the kit you can probably get away with buying half that amount of 18/4. Honestly though, the wire is pretty cheap, at 60¢ and 19¢ a foot, respectively. I also got some 16/2 speaker wire from Radio Shack that happens to be red/black for the spindle wiring.

• Wiring
While I was Home Depot I bought a couple packages of crimp connectors, the spade/fork kind. I used these for wiring all the stepper motors and the extension wiring into the terminal blocks. It took a while to cut, strip and crimp each little wire, but i think it’s worth it. I also found some small female connectors for the homing/limit switches, rather than soldering them.

Inexplicably, (and I’ve looked over dozens of these forum posts and read the instructions and watched the videos) I don’t know why nobody has ever bothered to say "Label your stepper cables before you thread them through the drag chain, but I’m going to do it now. Label your stepper cables and limit switch wires BEFORE you thread them through the drag chain. Use some masking tape and a fine-point sharpie, and put the marks about a foot from the end of each cable, especially if you’re making longer cables like I did. When you go to cut everything to equal length and then strip the ends to wire into the controller, it’ll be better to have the labels further back on each wire. I also had better luck threading each cable one at a time through the drag chain than trying to tape everything together and smash it through at once. The cable has a natural curve to it, so if you curve the chain as you push the cable through it works easier.

Speaking of solder, the + and - terminals on the G shield aren’t meant to hold very thick cable, and if you have limit switches they want you to twist 5 wires together and shove them in there. Instead of doing that, I stripped back about 1" of the Zip wire and put all the wires together at the base, soldered them there and used heat shrink tubing to cover the joint. Then only the thicker 16 gauge Zip wire has to go into the terminal. I did this for the positive wire too for connecting the fan.

I also used heat shrink tubing to clean up the wiring from the spindle and the Z stepper to the terminal block.
Once I got the machine working and my test cut completed, I used some cable wrap to tidy everything else up and now I think it looks pretty nice. 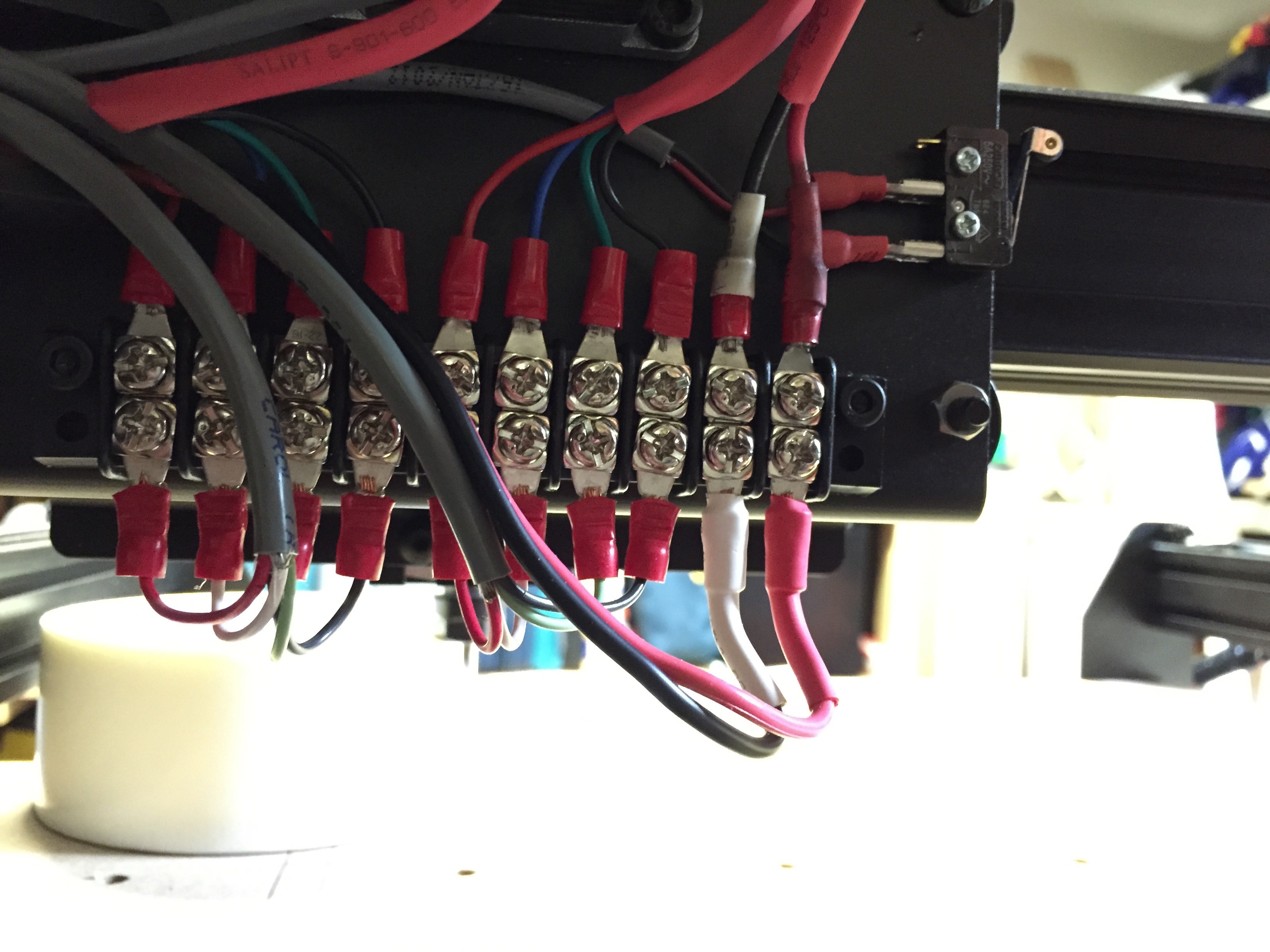 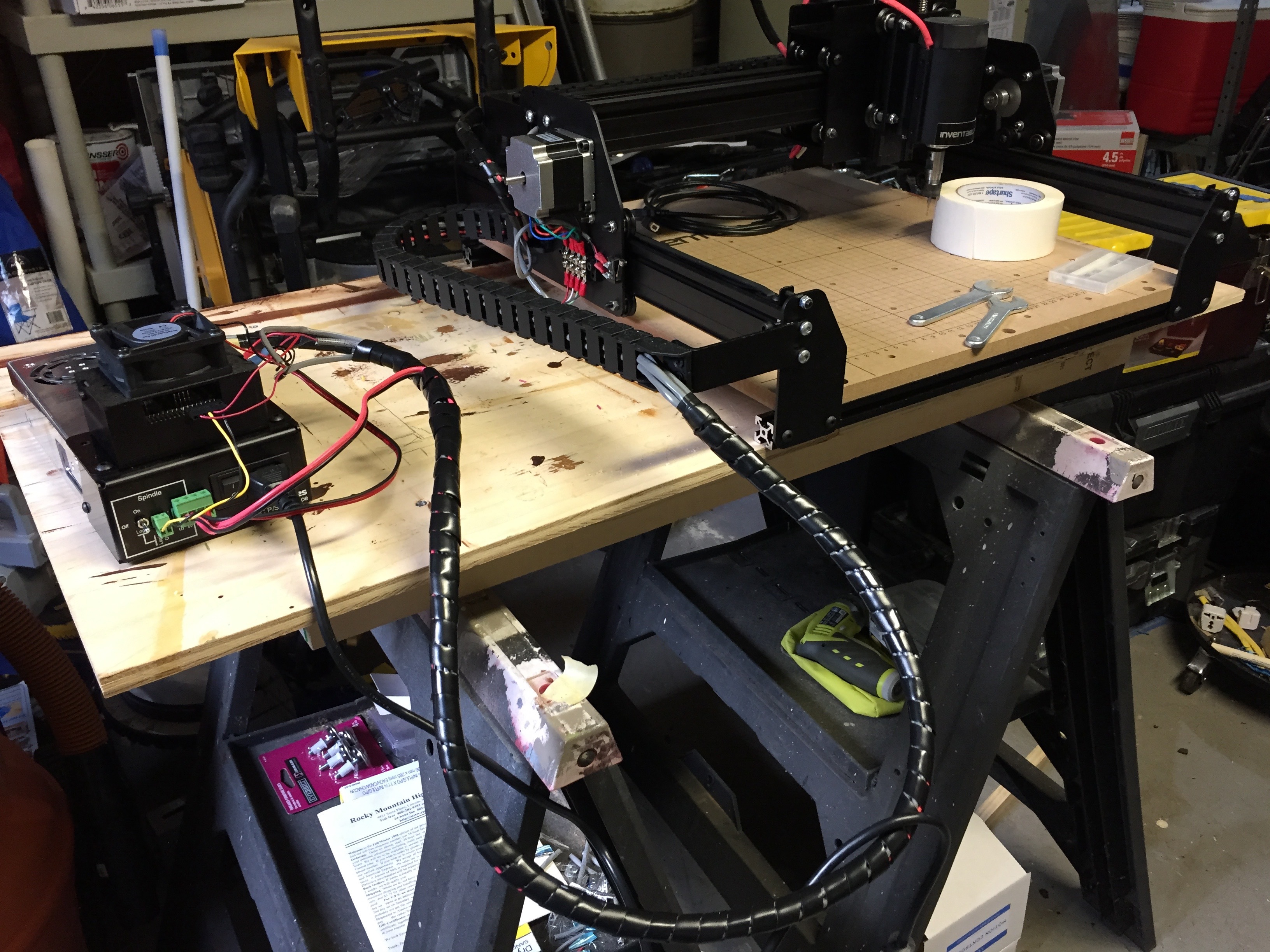 I’m heading to Menards when I pick up my kit tomorrow, and this post made me add a few things to my list. Thanks.

Neither Menards or Lowes by me had shielded security wire, the only multi pin wire in those sizes they had (thermostat, sprinkler, and door bell) was all solid, and for the movement this takes I’m thinking stranded would be much better.

I think for now I’ll wire it up with the wire in the kit, and then eventually add connectors to the end of those to work as quick connects to the electronics. I’ll get some stranded wire either online (possibly here), or elsewhere.

Yeah, I only found it at Home Depot. Lowe’s occasionally has some 18/4 but they were out of it when I was there.

Really good write-up, @Mike. I just started my build last night, and you cued me in to a few things I want to address as I go along, particularly the longer wires, and labeling the wires. Unfortunately, I’ll be away this weekend, so I won’t get much more done until next week.

Are you running it on those saw horses?

Yes. There’s not much violent movement from the machine at any time, and it all stays relative to itself, so I’m not really too concerned with wobble at this point.

I am however going to make a platform for it so that it can be more level and I can pick the whole thing up without actually touching the machine. I also plan to put it in a more permanent location when I have time to create one.

Do you remember what the sizing or name of the small female connectors for the limit switches were called?

They were the 18-22 ga (red) connectors. They came in a package with 8male and 8 female. I got them at Radio Shack, and they were in the drawers with the other bits and bobs.

They’re still a little bit too big but they fit securely enough.