These popped off something during my first carve

Hey! I just completed my first carve, and while it was carving these 2 nuts popped off of something and I can’t figure out from where… The only thing I can think of that had pieces this small were the homing switches however they’re all secure. 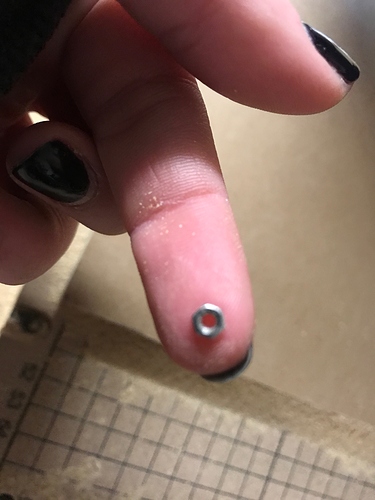 Have you checked the cable raceways where they attach?

Pretty sure those where to the homing switches. I couldn’t think of any smaller bolts. Prob on z axis?

Gotta be a home switch. I think those are the only nuts that small that aren’t lock nuts. There’s 2 screws per switch so they could appear tight.

The Z probe isn’t a lock nut but it’s much larger.

That’s what I thought too, I’ll triple check them. 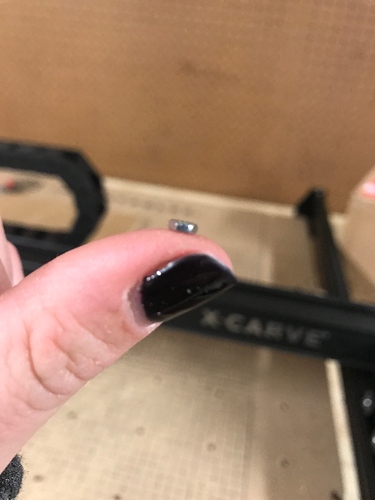 Def looks like homing switch. But now I think your just showing off your nail polish.

My question would be is your finger 1” in diameter or 10” in diameter. Of course I’m exaggerating but scale when compared to a finger is hard to judge because not all hands are the same size. So these could be anywhere between M3-M5 nuts depending on whose finger they are sitting on.

Nice polish by the way.

alright i’m convinced it’s the homing switches. I’ll report back tomorrow. I might be showing that off considering it didn’t chip during assembly Success

I know, it’s hard to capture such small size differences within a picture… I have a average size thumb I’d like to think. My gut tells me they’re M3 nuts.

None of mine were tapped except for the Z axis

Yes, when I find where these came off of I’ll use locktite.

Holes for homing switches on my Gantry Side Plates are tapped for M2-0.4 screws

I just realized I’m a dumb@$$ and the holes are actually M2 holes and not M3.

I remembered that I had to drill and tap M3 holes for my linear Z and the switch needed to drill out.

Point is, the only screws that small are home switches.