I’m giving a go at machining wax with my x-carve, and I thought I’d solicit some tips/advice from others who have successfully done so. I first tried with some machinable wax from a DIY recipe. Actually worked quite well with the larger roughing bit (1/4"), but when I got down to the finishing bit (1/32") the wax started wrapping itself around the bit in a big glob and generally made a mess out of everything. I’m going to order some commercial machinable wax to see if my recipe was just bad.

The one problem I see with trying to carve wax with my x-carve and Dewalt 611 is that I can’t get the RPMs down anywhere near what is often recommended for carving wax (around 5000 rpm max is what I read most). Has anyone had any luck plugging their Dewalt in to a variable motor control to try to decrease the RPMs below what is allowed by Setting #1 on the router?

Unfortunately, routers such as the Dewalt depend on rotating an internal fan to keep things cool, plus they lack torque at lower speeds induced by reduced current. It sort of works for some case, but can create its own problems. http://www.shapeoko.com/wiki/index.php/Spindle_Control#Speed_Control

Or use a VFD/PID or get a “real” spindle.

I’ve done jewelers wax and yes, due to the high speed of the Dewalt on 1, you have to go fast. Go shallow doc and as fast as you can without breaking the bit. Use an up-cut bit and 1 flute if you have it. I had to use a 2 flute because it was all I had. 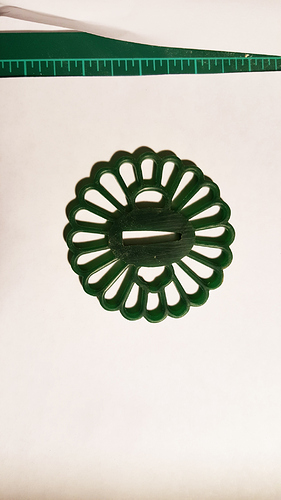 Thanks for that tip, Jason. It’s good to know somebody has managed to make it work. When you say “shallow” and “fast,” can you be more specific? My first attempt I was going 1.5 mm depth per pass and running at a speed of 2000 mm/min roughing and with 1000 mm/min finish pass.

I use imperial, so you will have to do the conversion. I used .01 doc per pass and 120ipm. I also spritzed the surface with windex and gave it another squirt after the first pass to settle in the cut. I use a spray bottle of windex for a lot of stuff in the shop. Cutting plastic and wet sanding plastic/acrylic.

for casting in my case

As for me, I cast bronze and silver sculptures and jewelry as another hobby. One of the ways you do this is through the “lost wax” process. I’m interested in using my x-carve to create the necessary wax models.