Tool path and text do not line up 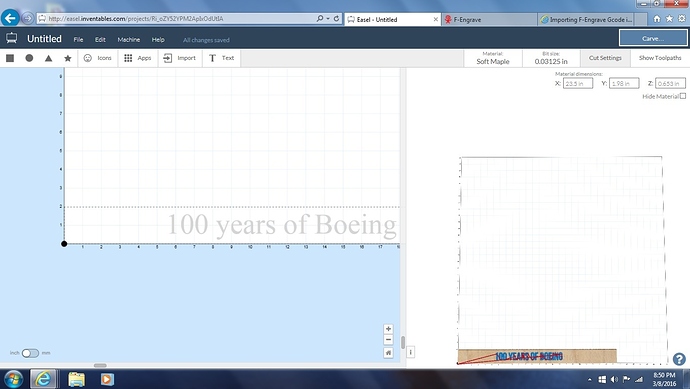 Boeing.jpg1360×768 124 KB
I thought I would start with some simple text on a picture frame, I got the text all laid out and centered where I want it, but when I hit the show tool path button it isn’t the same as the text, I tried different Easel fonts and got close, but still can’t get the XC to carve the text in the center of my work piece. I drew a center line on the work piece and the text is off by 2.5 inches
BryanPierce March 9, 2016, 9:33am #2

I have a problem with this to

If you don’t mind, can you please share your Easel project (or a copy of it)? Sharing can be done via the menu.
Others can then try it out and see what could be the problem.

DOH! Try this, thanks.

This looks like it’s a problem with the way Easel is rendering fonts for display on your computer. Notice how the font in the work area on the left is not the same as the font in the 3D preview? Easel’s back end is rendering the font you chose, but the front end (what you see when you’re working with the text) isn’t. It looks like the workspace is defaulting to a generic serif font.

You won’t be able to hand-center the text this way because the two fonts have different character widths, and since Easel left-justifies all the text the center points will be different.

But! There is a workaround for this in the meantime.

Oh! It could be that you’re using Internet Exploder as your browser. I seem to recall that Easel and IE don’t really get along that well. Try in Chrome or Firefox and see if your font rendering problems clear up.

Just loaded it up using Firefox and the tool path looks correct and the text matches up nicely too. Now I just have to work 10 hours before I can go home and carve it, thanks Mike!!

The Sharing a project feature is one of Easel’s hidden gems.
It easily allows a community to view a person’s problem and solve it first hand!
Good job community and Inventables!

Absolutely! Thanks for the tip. And good eye @Mike for noticing that I was using IE!

Ok, so I installed Google Chrome and Firefox but neither one will show the 3D rendering. I get an error message saying there should be a 3d preview. What kills me is that I was using Explorer and could see the
tool paths and the 3d preview just fine but no so with Chrome or Firefox. Do I need to replace my graphics card? 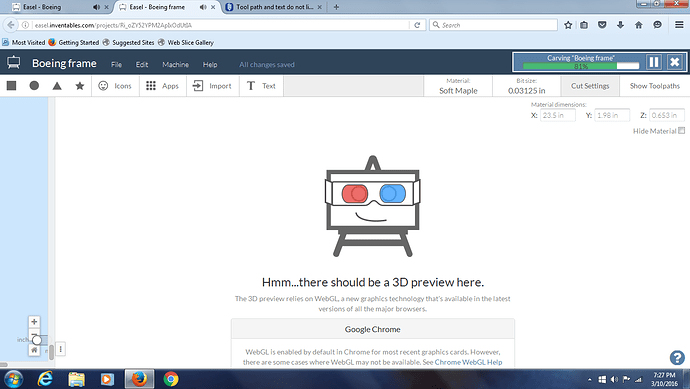