I’ve been running into some annoying trouble with my x-carve. I’ve done a few test cuts successfully. I measured and calibrated everything and the results have been correctly spaced. So, I thought all was fine and dandy.

I’ve had a few runs now where I get cuts along the tool paths. Right as this design was finishing up the last few passes, this happened (see photo). The diagonal jagged cut was not supposed to be there. 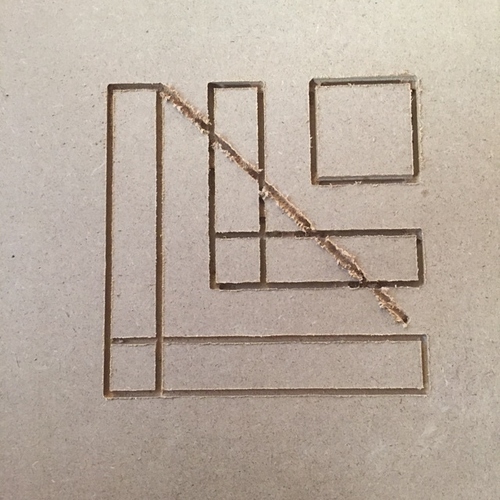 It looks like it skipped the command to raise the bit out of the way. The result was a very noisy rogue cut as it plowed through the board. This seems to happen at random times and has been incredibly frustrating to troubleshoot.

All the other lines are clean and correctly spaced/positioned. All the belts are tight and so are the wheels. It doesn’t appear that anything was slipping during cutting. It’s like the Z axis just decided not to raise between cuts for some reason.

Anyone have any idea why this is happening?

That was my guess. It was designed in Easel. The cut is along one of the tool paths, but is not supposed to cut there.

Here’s the link to the project: http://easel.inventables.com/projects/tC9xY2cruQoTWQoACj-3eA

You can see that the cut is along a red tool path.

I saved it again. Give it another try.

I am using a 24v spindle. What would you suggest to correct that problem?

I ran another test of the same design this morning. This one completed successfully with nothing out of the ordinary.

This is leading me to think your suspicion is correct. It’s probably missing that command due to noise. Since it’s the same design, it should be the same code, right?

Which leads me to a bigger question… how do I prevent this from happening?

I’ve got some extra ferrite cores from a past project. I’ll try adding them on and see if that helps. Thanks for the suggestion!

I am unable to see the replies too this, was it resolved?

The gentlemen that answered the questions has since left and took all his replies with him.

Hi JayDavis. It did end up being noise. I would still run into the issue intermittently before I upgraded from the arduino based controller to the Xcontroller. Since then, I haven’t encountered this issue.

To add to that, the ferrite cores did improve the situation and reduced the frequency of that happening.