Toybox for my dog

This was another in the long line of projects I had queued up while I waited for my machine back in the spring. It’s a toybox for my dog, Wilma.

It’s 1x12 pine with rabbet joints. I cut the sides, inlays, and front text on the X Carve. Stain is Minwax Golden Pecan, I plan on using PolyCrylic once it dries. 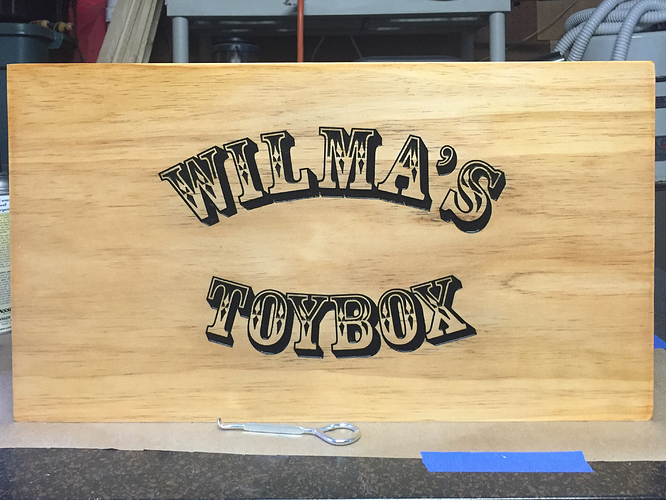 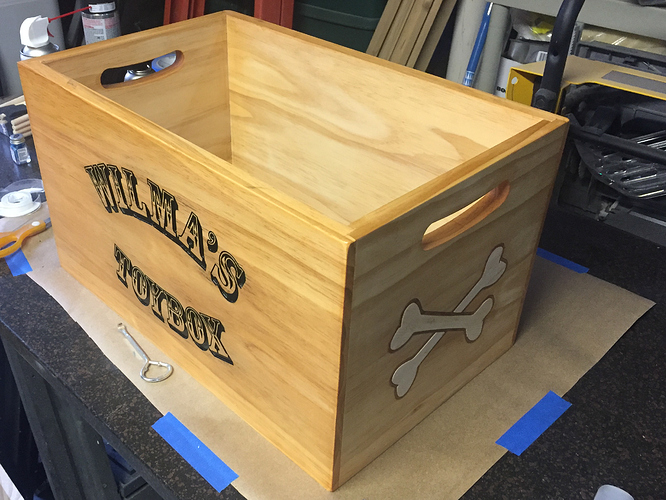 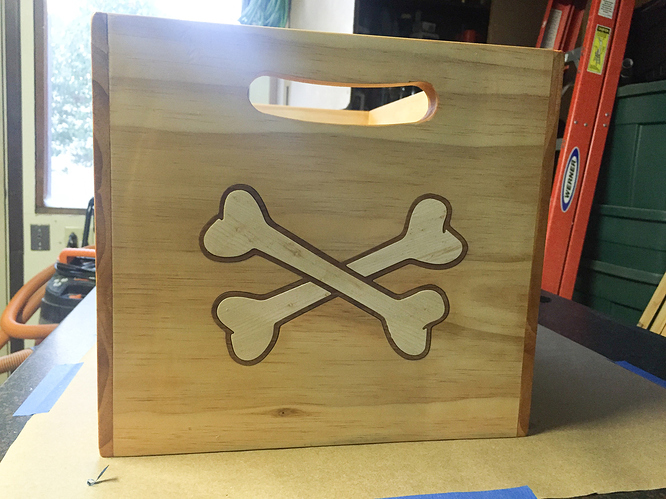 .02" as a tolerance for the inlays was Way Too Much. .01 (the default) would have been just fine.
The plan was to sand the inlays flush without gluing them in first, because I wanted to stain the pine but not the inlay pieces. However the excessive play caused the delicate mahogany ring to break. After cutting a new one I decided to live with the inlays sitting a bit proud. I also need to do a couple more coats of shellac before painting the inside of the letters. Despite sanding down to 400 grit, and using the shellac, I still managed to get paint bleed into the grain of the wood. It’s not too bad though, and I can live with it. It’s just a little character is all.

This looks fantastic, you did a great job! I really like this idea and I let my dog look at and now she is insisting on one.

I did a bunch (50+) inlays for holiday gifts and here is what I learned if it helps anyone. I set the tolerance to Zero and there was still enough play to get the letters in real tight. As far as the headache of breaking the inlays trying to remove them from the carved wod, I started taping accross the inlay with painters tape presses firm around the edge of each cut. The I used the band saw or the table saw with fine blades to cut just under the depth of cur. The letters and objects release right on to the masking tape, keeping everything together and easy to peel from the tape one letter or item at a time. For the bleeds on finishes I used clear spay lacquer with pretty good results but that parts a challenge. For super small or tights recesses, using Bondo saturated with colored wood dust dabbed into the cavity then sanded flush worked really well, just be sure to get the bubbles if any develop in the epoxy with a toothpick or blowing hot air over the epoxy as it cures. Another item I got that helped with the gluing is a Mini Gluebot from FASTCAP.com. It has a tiny tip perfect for shooting glue into tight spots like inlays. Happy carving people!