I had a play with F engrave yesterday. Created my G Code OK after a quick read on the forum after Easel got a little upset about some settings. Ran the carve and it all started OK, got to 6% and froze… i left it for a few minutes to see if it was a glitch but after 5 mins I gave up stopped the carve and then restarted it but same thing.

Any idea where i’'ve gone wrong?

no i just used easel. I’ve not tried UGS yet. This was me dipping my toe out side my Easel comfort zone.

The #1 and #2 are g-code variables. They will not be used if ‘Disable Variables’ is selected in F-Engrave general settings.
(This is not a new behavior.)

Probably. GBRL does not support variables so unless Easle does some work with them something is going to fail. 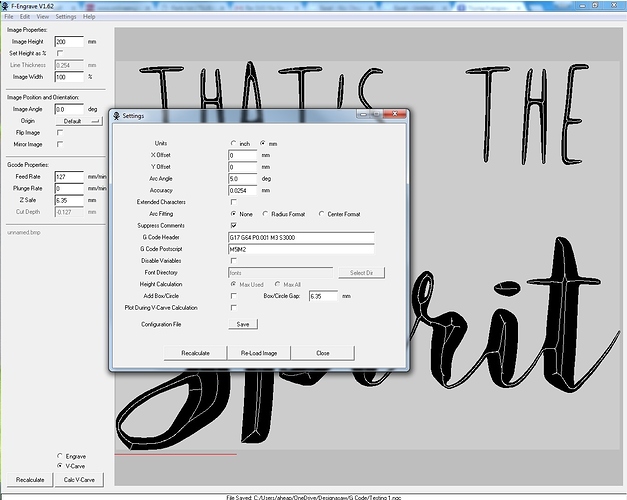 Had a quick play, (should be working right now…oops)

unticked the box and re-run the G-code.

Quick question. I want to try f engrave also. Once created in f engrave can you upload directly to easel or do you have to take the file to Inkscape first. So far I have only used Inkscape and easel to doing the carving. I am at a complete loss outside of that.

I’ve managed to get it to carve now and i’m happy with the results. I’ve got a little issue that i can’t reopen the G-code file in F-engrave and the original BMP i was working from was on my computer at work. So i found a qiick picture of Homer and carved him instead as a very quick test.

This brings me on to my next problem. So i’m making a cutting board, i want to use F-engrave for V carving the text and then cut a rectangle around the text using a ball ended bit and finally cut out the outer edge with a straight 1/4 bit. This will mix using the G-code and then normal easel for the rest of the bits.
How do i center the G-code parts in the area that i want?

I think i’ve made a *ock-up then. When i’ve done the BMP file to read in to F engrave, i’ve not been concerned with the size. I’ve then scaled it in Fengrave to give me the hight of the Vcarved bit. So the Zero point for the V carve section and the Easel part won’t be the same.

I think i’ll cut the board out and do all the easel carving, then messure in to find the Zero point for the Vcarved text and repossision the machine. Fingers crossed, I’ll know for next time.

Got my next V carving project to do now. 6 clock faces with the hands carved in, they will be used for kids to do rubbings from at a museum. 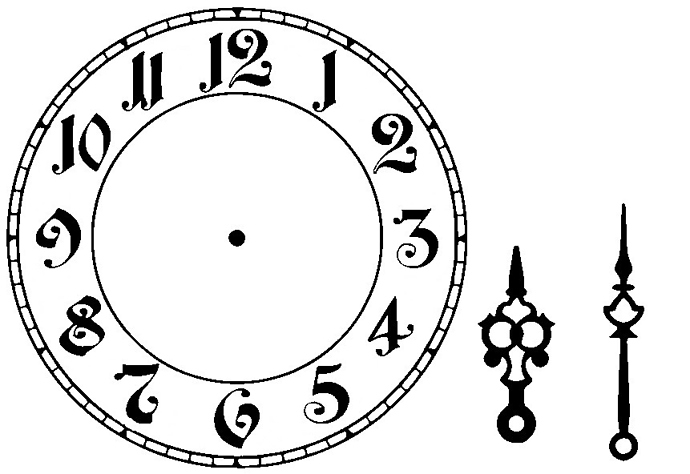 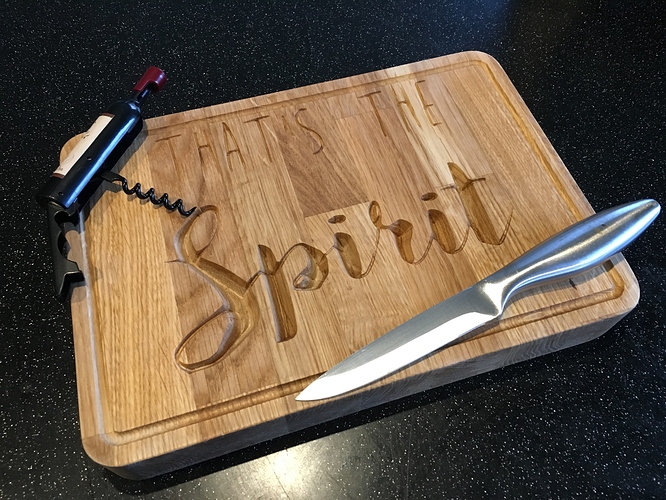 Well here is my attempt. I don’t think i had the cut setting right, i think i had the depth settings wrong. I only wanted it to cut down 2-3mm max. The client seems happy enough though. Can’t make the same mistake on the clock faces though.