Trying to Make a carved Cut for poker chips?

I have a cut out for deck of cards, but I’m trying to make a tubular section so that I can stack poker chips /checkers (horizontally) . I have no idea what kind of bit can do that, or program.

It would be easy in a 3d program, but I’m sure Easel can do it with a little manipulation. I drew my bottom rectangle and made a cylinder on top. Then I moved the cylinder half way down into the rectangle and split it. Lastly I deleted the parts that I didn’t need of the cylinder. 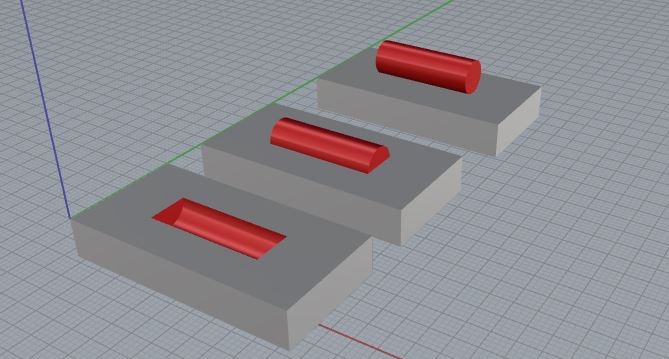 There are also roundnose cove bits that would create a rounded bottom slot.

Use the search feature with the word poker as I did:

Greetings: I am attempting to locate a file originally listed in Inventables, called Poker Card box. The box is designed to hold two packs of playing cards with carved lid, felt lined. Is it possible that someone has the address for the total package. Thank you, John Tyrone

There is only one thing that I truly have to know, How to do a cove cut, slot cut. I want to make cuts that are basically a half cylinder. 1.3’ in depth and width but rounded and straight down on both ends. The project is for a poker table I want to build and the slots are for poker chips. I have seen it done in one of the ads, where the guy made the stool/stand with the curved leg that he put into a cove cut. Even showed the cove cut being performed, just can not figure it out. Possibly a 3rd …