Long story short, trying to get logic to control my 611 on/off to relay… it’s not sending enough voltage… I checked the solder joints, m3 sends voltage but only 1.3 at relay, m5 cuts voltage. I bought this x-Carve used, it has the Arduino and gshield. So I seen where folks to a reflash… I started reading about that, downloaded all the stuff, read the inventables page on how to, and when I send the code I get an error message “cannot open file, resource is busy” and a warning about file space? Do I need to reflash or is something else going on? I know computers and very mechanical, but I know nothing about Arduinos and this type of code… ANY help would be appreciated!

Since you said it’s an Arduino and gshield it probably came with a version of GRBL older than 1.1. This means that when you upgrade to 1.1 there’s a pin assignment that changes (I forget which). But also 1.1 has a new feature that allows you to set the spindle output to be a simple on/off instead of a PWM output - from the github page:

New ‘$’ Grbl settings for max and min spindle rpm. Allows for tweaking the PWM output to more closely match true spindle rpm. When max rpm is set to zero or less than min rpm, the PWM pin D11 will act like a simple enable on/off output.

So once you get 1.1 flashed and make sure you’re attaching to the correct pin, you can set the MAX RPM to 0 and it’ll work with your relay, no issues. The issue you’re seeing is that the spindle control output is configured as a PWM output and your set spindle speed is therefore outputting too low an effective voltage.

Thank you! That makes sense. Now for a noob question, please forgive my ignorance… how do I upgrade to version 1.1? You mentioned flashing the board… do I have to erase what’s on it now first?

The wiring difference in GRBL changed between version 0.8 and version 0.9. If you are upgrading from 0.8 make sure to check out this page which shows the differences.

Do you know what version of grbl you have?
When you connect to the board (how are you connecting and sending commands by the way?), it will report back the version.
Did you just send M3 or did you try a speed with it, like M3 S10000?

If you send $$ to your controller and report the results here, it’ll be easier to help.

I will do the $$ tonight and post the results… thanks!!!

ok here is machine inspector in easel…not sure if this helps. i entered $$ and it did nothing. 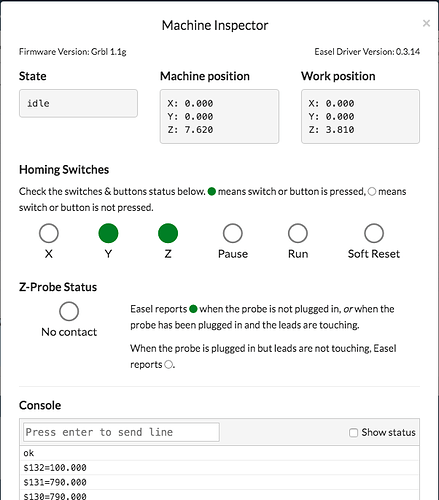 it says 1.1g…is that right? I also have Arduino IDE, but don’t really know how to use it… is there a way to find version from that?

also the relay im using is the DLI

Hmm… well I appreciate your response

Hey @ChadMartin,
I’d reflash grbl. If you’re still not getting anything, check the voltage you’re getting from the other pins on the Arduino as it might be that the board is bad. Luckily, a new Arduino won’t set you back much if that’s the problem.

Ok I’ll try to reflash… I tried a week ago but kept getting errors… I’ll have to read up how to reflash. Thanks for your help and time.

Ok I reflashed Grbl and still the same… I get 1.8v on pin 11, that’s the most I can get out of it. So you think it’s the Arduino or the shield?

The arduino. That pin on the shield is just a pass through from the arduino. I’m not sure where you’re located, but if you have a Microcenter nearby, you could pick one (or a few) up for like $7 each.

Awesome thanks for the help! And that goes for everyone that replied to this post. So I ordered a new Arduino should be in next week. Thanks again!

Update the thread if you make any progress…good luck!

It’s fixed!!! It was a bad Arduino, you called it. Bought new one for $16, flashed it, plugged in and BAM! Again thank you!