So after getting the CNC4Newbie 7" z-axis up and running I went to check square, and the right-left it was perfectly square and It was massively off front-back (i.e. in the Y-axis), Initially I checked it with my machinist square, but for the photo I used my carpenter’s square as the blue anodization makes it easier to see. The entire x-carriage is twisting under the weight of the CNC4Newbie slider. I have an original 2015 (i.e. the 2 maker slides) with the 1/4" bolt stiffening mod. I shimmed the plate out at the bottom to make it less pronounced (the photo below is after shimming) so the actual spindle is not terrible, but you can only shim so far before it gets stupid. Is this only fixable via switching to the newer thick x-axis extrusion? Since changing the x-axis extrusion apparently involves also swapping out the drag chain (not excited - since this machine has the solid drag chain) 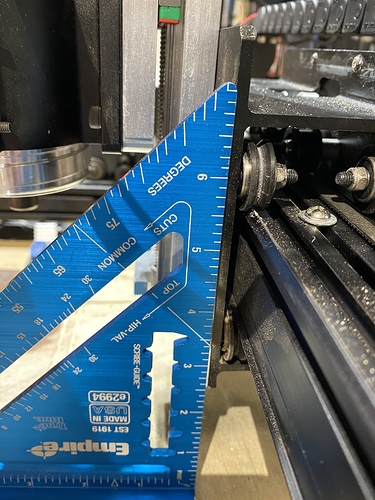 I have the same Z-Axis as you do and I upgraded to the single X extrusion. I was able to use the old drag chain. It’s been a while, but I don’t remember having to do anything special to it.

I did not change the drag chain itself but I did make some new style braces and installed a 20X20 extrusion (new style design) for support to keep the chain from drooping, the old style was bad about this as there was no support in the middle and I always worried about it hitting the work.

If interested in doing this here is a link to the brackets I made from Aluminum plate https://easel.inventables.com/projects/hMsxu84J4LOBYCVt6deESg