This topic is here so you can leave your thoughts and feedback on the two stage carve feature.

Thanks for testing out this feature, we really appreciate it!

Are you guys considering a more general solution and support n-stages? It’s not uncommon to do things like:

Two stages will be better than 1 for sure, but I expect n stages will needed by most people at some point.

We are keeping that in mind. This is the first step!

Is that common around here? It’s not something I’ve needed.

Now assuming VCarving becomes a thing I can see that as a third “bit.”

@NAM37 A Chamfer is common edge on Cutting Boards. I prefer using a Roundover edge.

I was really just trying to illustrate that there are generally different types of things you want to do that require different bits, not that a certain edge is common.

I’m having a slight and strange depth problem when doing my cleanup pass…
It’s cutting just a bit deeper on the bottom 2/3 of this piece. It’s just a test piece figuring out speeds etc but I’m not sure what to do about this. 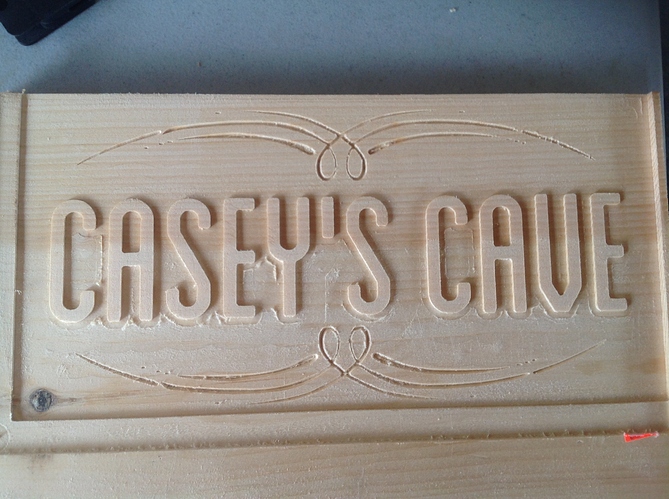 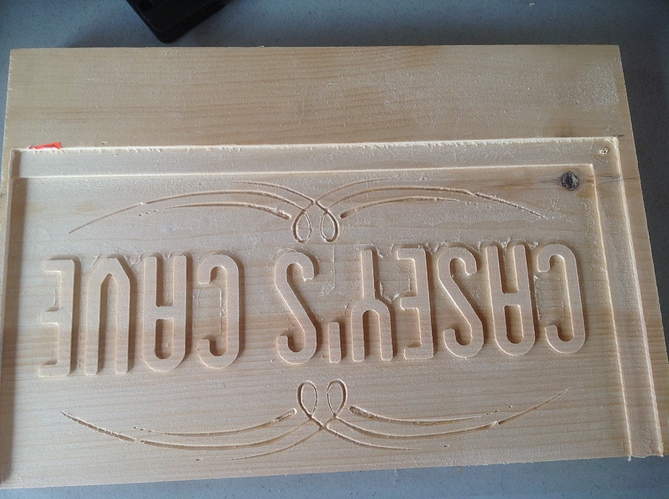 image.jpeg2592×1936 1.38 MB
You can see around the letters where it’s cut too deep but the depth on the top of them is perfect.
This was done prob 3 days ago and I see there has been an update I do believe. I dunno if I should try again with the update or if it’s something else?
Has anybody else ever encountered this?
I used the paper method for finding z “0” and other than that, it’s as basic as can be. The pinstripes were in f-engrave with ugs, so it’s no concern on this topic.
CaseyKookla September 26, 2016, 7:01pm #9

Would the probing make a difference in this case though? The thing that’s getting me is that it is bang on for the top 1/3 of the letters and too deep for the lower 2/3.
I am ordering the probe but waiting to hear back how I can ship it in same package as X controller I purchased before because I’m Canadian eh! lol but I may make a probe before the day’s end. It’s raining here so I may aswell head out to the shop.

I def wasn’t looking for quality which is why it was pine lol but yes I have the 60 min mod on X axis. And next will be the y axis as I can see a major weak point when the machine is cantered in all axis especially…So if I was to slow down my cut speed, you think that should at least help? I was running that at I wanna say 60 ipm, 0.03" doc, and a 1/8" 2 flute (straight) bit from inventables.
I’ve been trying to experiment to find out how fast (or maybe I should say SLOW) I can cut.

Delighted to find this functionality being added. I enabled 2-stage carves, and it let me input info for my second bit. However, I don’t see any way to change the cut settings. They certainly won’t be the same for a 1/4" bit and a 1/16" bit. Is it going to ask about settings when I change out the bits?

Well, after several false starts (my fault, not Easel’s), I finally got a two-stage project to run all the way through stage one. Then, to my dismay, it asked me if everything went okay (the answer was, “Um… well, yeah, so far…”) and then wanted me to share my success with everybody. What happened to my second stage? I guess I’m just supposed to run everything over from start again and choose “Detail pass” this time, huh?

I tried my first two stage carve today and it wasn’t right. This was a basic carve really. Just rectangle box with a design at the bottom. The first part ran fine as it should have. When it finished I changed to the detail bit and selected the second part of the carve stage. What it did was strange. It simply ran the from the top of the rectangle cutout then once it finally reached the bottom of the carve it cut another groove all the way around it then from one corner to the opposite end it ripped a line all the way down.

I just ran the first stage again a tad deeper to shave that off. Now the second stage is running, but shouldn’t the router lower to the bottom where the design is to be carved or is it supposed cut nothing for an hour until it finally reaches the proper cutting depth?

Sadly that project got all messed up. I removed 2 parts of it to get the machine to focus on the main detail of it so I could get it finished… Easel became unresponsive while loading the tool paths, closed and reloaded the page. Since easel saves everything automatically the bulk of the project was scrapped.

Quick question, I am new to the community and been browsing the forums etc. I have just completed my assembly and I am eager to get started carving. I looked at your problem above with the bit carving deeper on the lower half of your design, could this be caused by the wasteboard surface not being parallel to the cutting plane? I saw a vid of a gentleman putting a pin in his chuck and then running the bit to the four corners making sure the work surface was flat and equal distant to the pin. He had made adjustments to screws on maker rails to raise/lower the corners of wasteboard. This might not be your problem but it doesn’t hurt to throw out the idea.

It was just a simple test thing I made. Easy to remake, but I’ll definitely make a copy to work with from now on.

My first attempt at two stage carve… a few nigglies aside it worked better than expected. 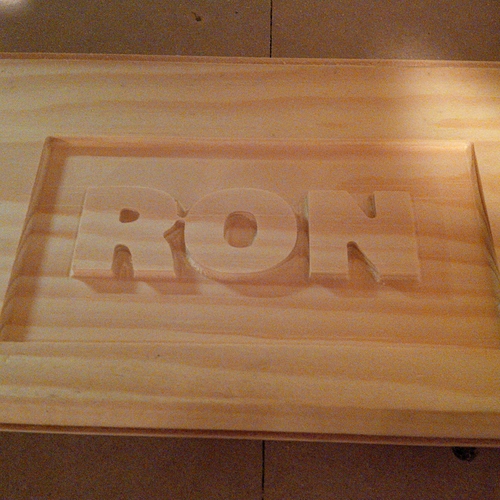 More fun to be had.

Good tip !! Will do that for future… Thanks!

I’m working on a trophy for my nephew… and then I will be ready for Rudolph!

I’m confused, does the two stage cut work as in the big bit will ONLY do what it fits and then when switching to a smaller bit it will do the smaller stuff? Or will the bigger sized bit try to do everything?