We are beta testing the new App Store. Click the smiley face.

It’s at the top of the screen in Easel.

I hate to ask, but can I also get access to this feature? Please.

I plan on doing a 2 stage piece that will be using a 3/8" core router bit to make a nice cove-edged inset, and then a 1/16" detail bit to cut out holes in the inset part. Essentially what I’m making is a vent return cover.

I could do it with Easel as it is currently, making 2 separate projects, but I’d rather be able to specify which paths get which tool.

May I also have access to the two sage cut, app store and vectorizing features please?

@IainStewart you have been added.

Ok, I’ve used the 2 stage cut system a couple of times, and here are some impressions:

• The progress bar for the cut is for whatever operation you’re currently doing (rough/detail) not for the whole job. So it’s a little optimistic. Maybe since Easel knows you’re doing a 2-stage operation it could only go to 50% for the rough pass and then stop, home, change bits and then pick up at 51% or whatever.

• The detail pass has WAY more rapids and up-down operations but still goes layer by layer, so it takes almost as long as just doing the whole project with the smaller bit from the start.
As an example, if you cut out the star ornament, with those sharp points, the machine should be able to do the outside points no problem with the larger bit, then go back and just do the inside points with the detail bit. Instead, it goes along each straight line and pecks here and there, it traces well away from where any artwork is, and then it eventually cuts out the areas it’s supposed to.

Thanks for the feedback!

What size roughing and detail bits did you use? Also, which star ornament project did you carve? Can you send me the link to the Easel project?

just did my first 2 stage cut using easel and the roughing stage went ok no problem but the detail stage seemed like a waste of time. all it did was hunt and peck and it never really even cut anything 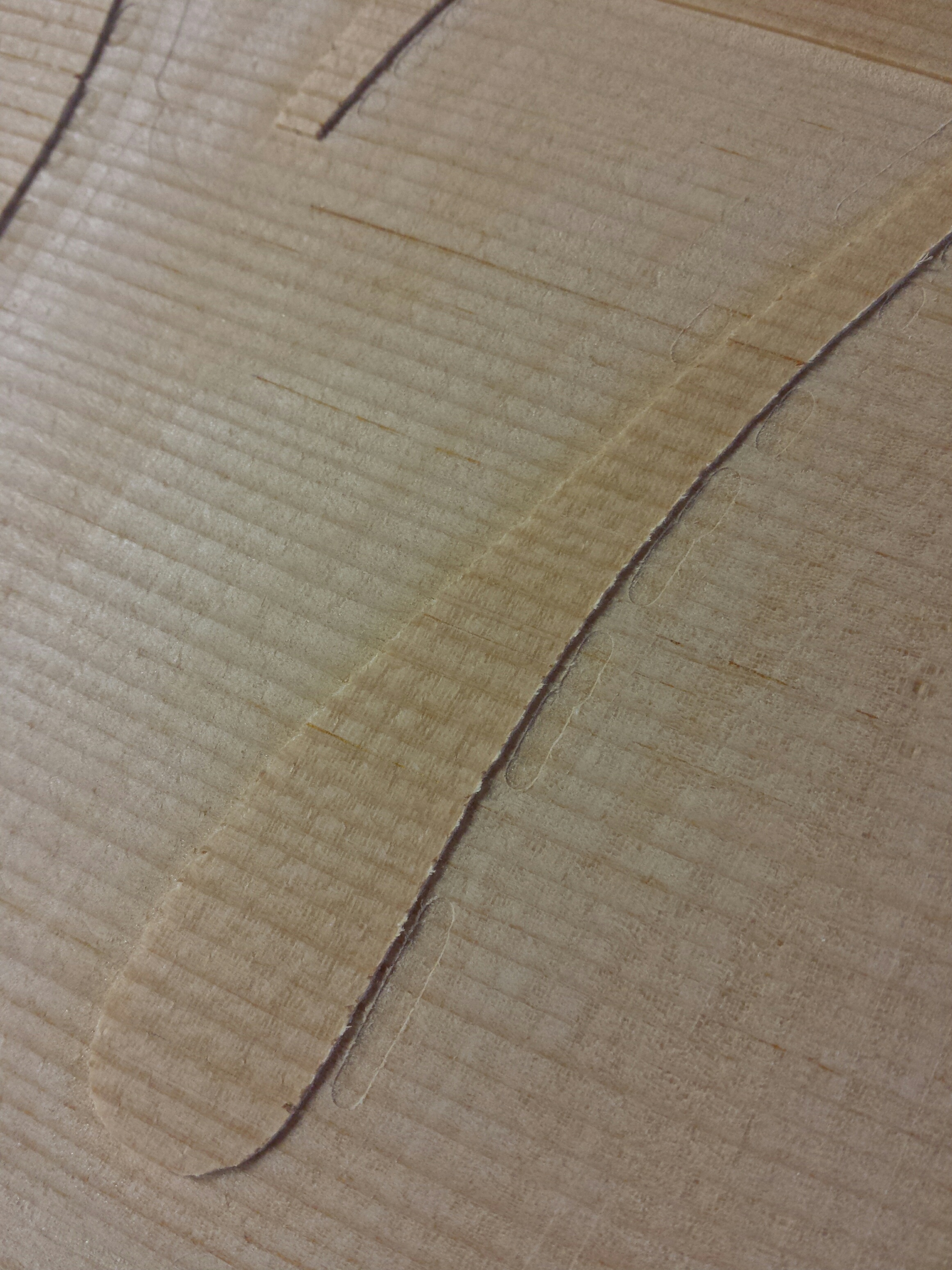 Jeff, to back up a bit, I was using the star as an hypothetical example, I didn’t actually carve it out. But, I meant the 6-sided star slot-together ornament that’s used to be one of those “featured projects” on the home page.

The first pass failed because I was dumb and was cutting too deep for the shoulder of the detail bit, and it broke. I’ve since modified the file to be shallower overall, and made the text much larger so that a 1/16" bit should give me the detail I’m looking for.

Still though, when I render the toolpaths, it generates TONS of rapids for the detail bit. I haven’t had a chance to try a second physical cut yet so I don’t know whether it’s still doing the offset outline thing or not. 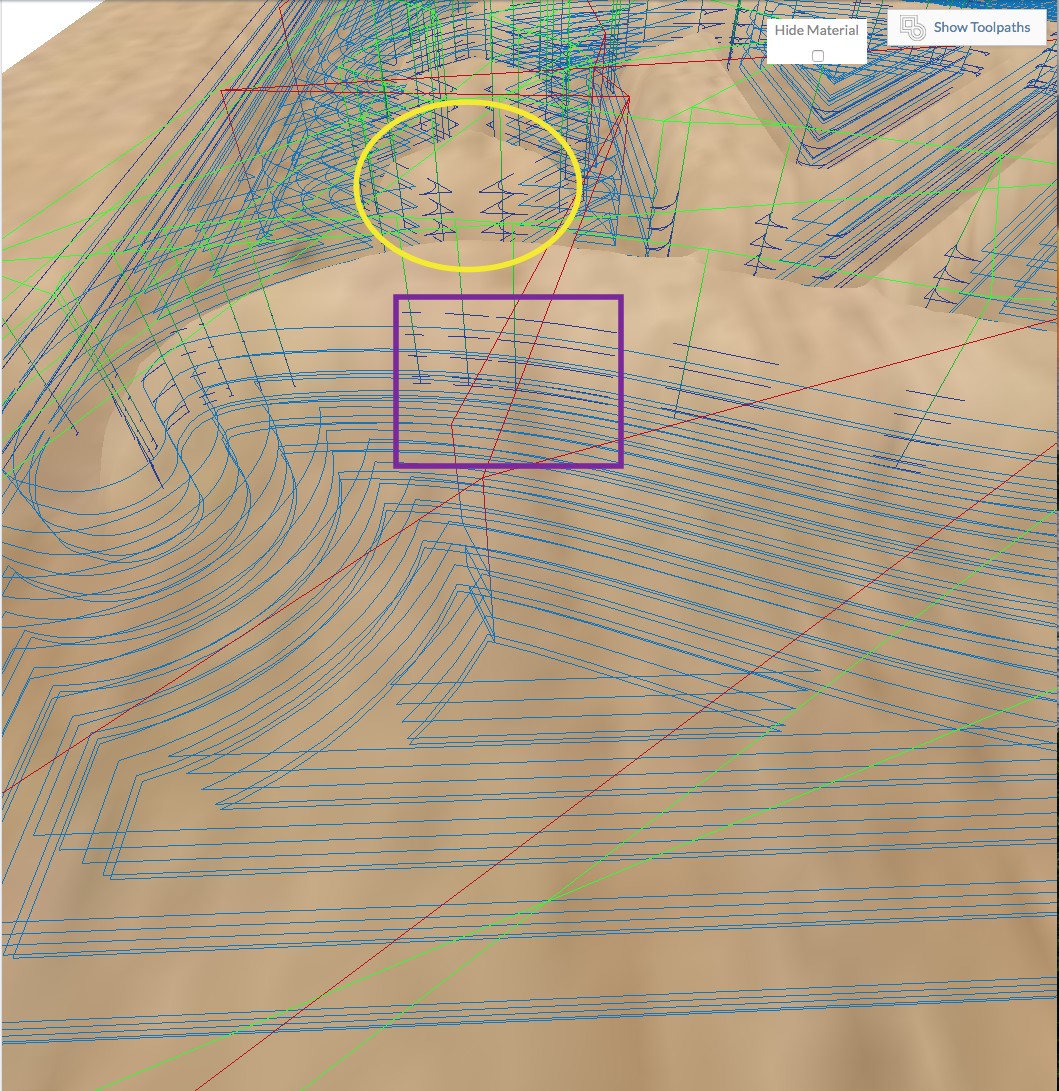 In this picture, where I drew the yellow oval it seems to make sense for the detail toolpaths to be there. That’s an area that the 1/8" bit couldn’t get to.
But the purple rectangle, the rough bit did just fine on its own. And the design is full of areas like that, which, if it’s inside another shape (like the center of an O or R) means another rapid, and another up/down operation, which takes forever.

Thanks for those examples, @Mike and @BadWolf. We’ll investigate those and look into tweaking the detail pass.

I was seeing the same type of behavior on the detail pass. I posted a short video and description of the odd behavior in this link.

What seems like odd behavior from Easel on Detail cut Troubleshooting

I was doing a two stage cut with a 1/4 rough bit and a 1/8 detail bit. The rough cut was perfect, performing exactly as I thought it would. But when I started the detail cut, the tool behavior was very different than anything I have seen before. The Easel project I was carving has lots of small holes all with a diameter greater than the 1/4 inch bit. The rough cut had cut all the holes and I expected the detail bit to only clean up the text that is also in the project. Instead the 1/8 in…

Can I get access to this? I’m just about done getting everything put together for my table and x-carve and a couple of the first things I’m going to do would greatly benefit from the two stage cuts. Thanks!

It looks like your detail bit was larger than what Easel expected it to be.

I would like access please. I specifically came to the forum to find out if this was possible since I’m about to start my first project and already need the roughing and detail features. Hopefully some of the feedback I’ve read has been incorporated because it sounds like it could be great but there are issues with actually providing detail work.