What OS are you using?

that will determine what file you need to run.

you don’t need internet for UGS

I use stable version of UGS classic. There are 4 items in the file after you download it. One opens to the classic control panel that you see here. It’s called an executable JAR file. You click on it.

Depending on how you have it set up, you have to click $X to enable the machine.

you have to click $X to enable the machine.

no, you should home the machine to unlock OR disable homing ($22=0)

I should have had a “may” in there. Oddly enough I just installed Easel and UGS last night on a new laptop. I couldn’t get it go through the x carve set up. I re-read and noticed, as it’s been awhile, that I had to download the Easel driver file and Java file. I had already loaded UGS.

Only after downloading the Easel driver file, could I get through the Easel machine setup. I also noticed a second COM port available after this…After completing the setup through Easel, I extracted UGS again because it didn’t work last night. This time everything worked and with homing switches installed, I HAD to click the $X, as it went into the alarm state by itself. This may be because it was homed during the easel setup.

Perhaps if one doesn’t have home switches then this isn’t an issue, but given the parameters of the set up, UGS defaults to the alarm state before homing. I have always had home switches on, so I can’t speak to a different set up.

UGS showing Alarm error only when Homing is enabled

Don't know if this is just the way things are in UGS (...and I do mean Universal G-Code Sender) but whenever I have our 500mm machine setup to allow homing, I have to unlock UGS because the alarm is going. I may be wrong, it does happen, but I thought that that UGS would use the Limit switches for more than a homing mechanism. If it had worked the way that I thought that it would I would not have a Z axis switch in 12 pieces. I've looked for solutions wherever the net has taken me (believe me…

With homing enabled UGS will start in an Alarm State, its not a “Mayday alarm”, its an alert that the machine is not syncronized with its operating range (Design Space).

One can use either

So just out of curiosity, I went back out to the shed and opened up the UGS again. It comes up to the alarm state after it is opened. Instead of clicking on $X like I always have, I clicked on the $H to home it. It stayed in the alarm state until all the homing sequence tasks are done. Only at that time does it turns to " idle"…… So in conclusion, you can do either the $X or the $H to get out of the alarm state. Just like Haldor said…

You should not do this. Your machine zero position will then be where ever your spindle is currently. Then things like g28, g30, soft limits, all get screwed up. If you don’t want to home the machine, deactivate homing.

I do like to home and always do it before setting my zero positions for my work. My zero position more often than not is the centerline of my drawings and X0,Y0 on them. My Arduino gives me a negative number after homing and I’m too non computer savvy to correct that by reflashing it, as I’ve read in the archives. It’s just an extra click to open and close the software to get it all homed and zeroed.

Here’s a positive build 1.1f and instructions on how to load it.

You should not do this. Your machine zero position will then be where ever your spindle is currently. Then things like g28, g30, soft limits, all get screwed up. If you don’t want to home the machine, deactivate homing.

Agreed. Doing a homing cycle is my first action whenever I power the machine up.
Power NO, controller connects (Easel or UGS), send $H and while machine home (20s worst case) I get tools/material organized for the carve.

It’s just an extra click to open and close the software to get it all homed and zeroed.

Why would you need to have it zeroed? As long as the machine and controller is in sync zero/negative/positive space is arbitrary

You may have good reason, I am simply curious.

My other machine uses mach3 and when powered up, I home it. The home switches are in same place as the x carve, except Y is back left. That point becomes 0,0,0. My work is usually at the opposite end of the table surface. I like to work in positive Y numbers, with negative X or positive X numbered coordinates. It’s just what I’ve done for 15 years and you can select this in Meshcam, which is what I use on 3D carves.

When I draw my parts, the bottom center of the part is 0,0. If the part is not symmetrical, Rhino ( the drawing program) allows you to analyze the object and put a box around it. It is very simple to drag that part by it’s middle location at the bottom to x0,y0. This keeps the router centered in the machine. I just repeat this methodology with the X carve from past practice. In case of a power failure or other glitch, I can get back to the same place to start over very easily.

So really it’s just my work habits that I prefer to repeat for my own satisfaction. I also mentioned the negative numbers that appear on UGS after homing. If I reflashed the Arduino, I’d still repeat the same procedure.

On some pieces I’ve done where I wanted the utmost repeatability, I’ve used the X and Y home locations on the X carve as my 0,0 on my drawing. That puts the centerline of my work out towards X9 or so. That works too.

I guess it boils down to reliability and accuracy.

Many musical instrument woods tend to be pricey. When you ruin a 50 dollar piece of wood, you get a little nervous when you have to start over on another piece of wood that costs the same, so any precautions makes the blood pressure a little lower.

When you ruin a 50 dollar piece of wood, you get a little nervous when you have to start over on another piece of wood that costs the same, so any precautions makes the blood pressure a little lower.

I can totally relate to that, thanks for taking the time to explain.
It works for you, thats what matter

Reliability and accuracy is a function of options/techniques/user experience and preferences.

For the general user, and not a counter argument against your workflow:
From a pure technical stand point more steps = greater risk of issues, thats what made me curious. I have done a multitude of different carves, single/double sided, with work zero both on material or by fixtures etc and never had use for whatever value the machine/work coordinates read.

As long as the machine/design is in sync, the model orientation, negative or positive space dont matter. If something happen, simple re-home and all is synced again. (within accuracy of switches)
Work zero, G28, G30 etc are all stored as an offset and are therefore persistent in case of shut-down, all that is needed is re-home to re-align machine with design.

Another thing is this. When I started cncing, I built my own machine. There were no home switches. There wasn’t a hobbiest Cam program worth its salt. My first few projects were made with Gcode that I wrote from a book. This is probably more than 15 years ago and closer to 20, now that I think about it. Time flies. Anyway, I’ve never used much more than basic gcodes with the exception of a G28 or what ever it is in my x carve probe macro.

So with my first commercial machine, I always just relied on home switches and then my x0y0 positions set manually. It’s hard to teach an old dog new tricks…lol.

Before all the cnc kits came online, you had to build your own or spend lots of money for a commercial one. 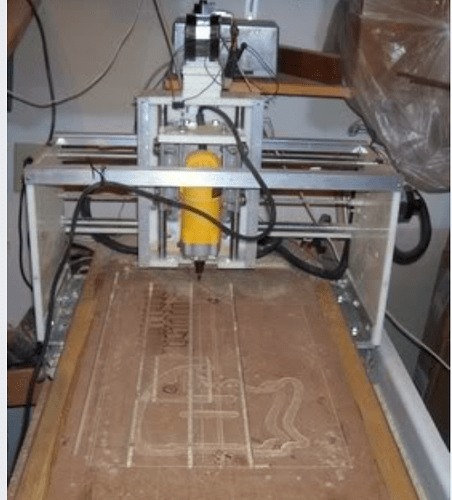