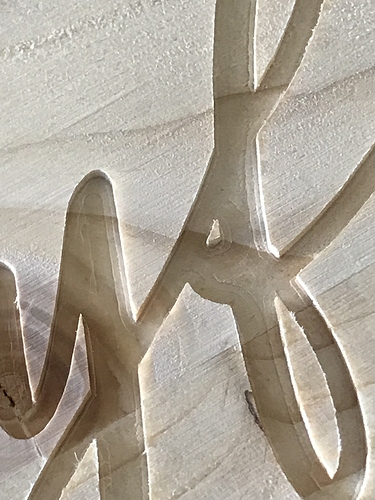 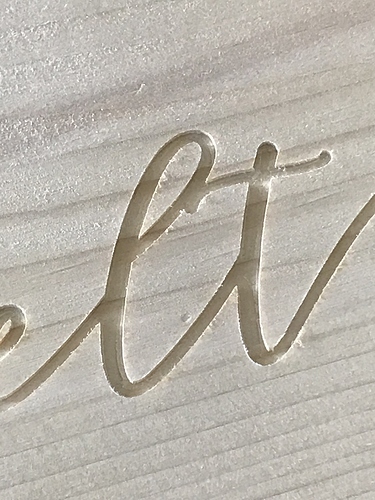 I had that issue and it was some v wheel play. Snugged them all back up and it’s been running good

Was it the Vwheels on the carriage or the z axis for you? I tightened them up some but was afraid of tightening them too much and then start putting strain on the motors.

Yes my z had some wiggle to it. Snugged the wheels up to where it takes 2 fingers to move them. Not too loose but not too tight. Also had 1 in the carriage to snug up

Are you doing 2 stage carve with the same bit?

When doing multi-stage carves, you’re almost never going to be able to get the exact same pocket depth between bit changes. Even if you were to use the same size bit, if you attempt re-zero your Z-axis between operations, it’s going to throw things just a little off. The problem is that it only takes a few thousandths of an inch to be visibly different, and any number of things can throw the cut off by that much or more. For instance, consider that, when using the Z probe, when the bit makes contact with it, it deflects just a teeny tiny amount. When you try to use it to re-zero your Z-axis prior to your second stage cut, unless you place the probe and X-Carriage in exactly the same position and orientation (down to 0.001", at least), the probe is going to deflect slightly differently, and you’ll end up with a slightly different Z = 0 position (with respect to the end of the bit). Also consider that the work piece itself can swell/shrink slightly in the time it takes to complete a carve.

In other CAM programs (i.e. Fusion 360), a tactic to avoid this difference is to leave a small amount of axial stock (stock in the Z direction) for follow-up stages to clean up. Unfortunately, this isn’t something Easel allows for.

One strategy (in Easel) that can help is to slow down your Z probing speed. You’ve got to do that with G-code commands, however, and I’m not extremely well-versed there… Someone with more knowledge may chime in.

Thanks for the info. I have noticed after my last run that it’s happening a little bit with just the first pass without changing the bit

This could still be the work piece swelling/shrinking during the carve, especially if your carve time is exceeding an hour or more. Soft woods tend to be the most susceptible (in my experience).

Check that your clamping/holding hardware is completely secure - it could also be due to a small shift in the position of the work piece. If your cut settings are on the aggressive side and you’re getting any amount of chatter, that could be vibrating the piece around even if it appears securely clamped down.

Definitely check out your Z-axis hardware - make sure the V-wheels are appropriately tightened, the drive belt is appropriately tensioned, and the lead screw pulley set screw is tightened (and preferably secured with blue Loctite).

Thanks, I’ll try all of this things!

Look to see if the Z lead screw can be moved up and down in the bearing? If any movement is seen you need to loosen set screw- tighten nut- re-tighten set screw.

The Z axis is pretty…inaccurate on a factory X-carve, this kind of thing can happen. Of course, tighten everything up like many have stated, but I personally just began to temper my expectations. A linear Z solves many of these issues.