So I installed OpenCNCPilot and was trying it out.
Jogging is not user friendly but could make do.
When I tried probing to create a height map the Z raised up to the mechanical stop and kept trying to go further. I had to hit the E stop.
Tried normal probing to set Z 0 and it probed in the correct direction but just stopped and alarmed when contact was made with touch plate.

I never got around to doing the carve yesterday, but I will be after work this afternoon.

Yeah, jogging in openCNCpilot isn’t very good. I do all of that in easel. You may have to go through the settings of OpenCNCPilot before you try and use it to verify that everything is setup correctly.

The program allows you to create “macros” and I have one specifically for doing the first “zero” before doing the probing operation. I’ll share that this evening as well.

Ok, I took a bunch of videos late last night when i was using the CNC.
Here they are. Don’t judge the shaky cam

I’ll try and make a cleaner single video later, but for now this’ll have to do.

Thanks for the videos and you do not need to apologize for them.
I did manage to copy the probe and set zero code from my preferred sender and past into the macros.
However when I import the project gcode it is large, way out of scale. I even tried it with metric code and had the same result.
And probing for height map only probed one location for me and stopped.
I am going to have to step away from this for a while as I need to be doing more productive things.
I may get back to you later on this.
Why do you not use OpenCNCPilot as your sender while you are right there ipo going back to Easel?
Thanks again for your efforts.

You may need to look at the settings for the program. Whenever i import, things are also way out of scale. Granted this program was initially designed by someone only wanting to mill PCBs.

I’m likely going to use OpenCNCPilot as the sender in the near future. I’m just more familiar with Easel. Jogging in Easel is far far easier than in the other software. I need to either figure out how to jog better in that program or write a few macros to raise the bit for changing bits and blanks. I just haven’t put the time into fully switching yet.

Once you get the process down, it really does produce a nice result. For instance I carved the two pieces below last nice that had some pretty fine detail and the wood i was carving on was pretty un-even to say the least. 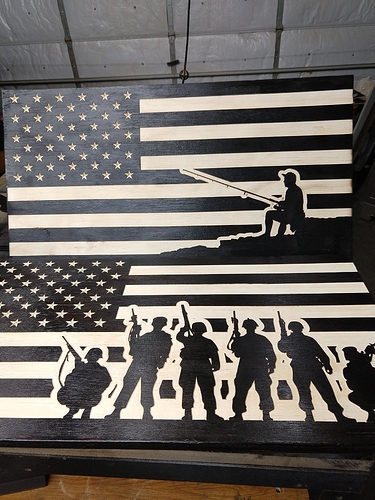 Ethan that is a pretty cool set up. Have you tried doing the union on a waving flag yet?

I haven’t tried that yet. Maybe one day!

Have you tried checking the teeth on the belt? Check for damaged/crushed teeth…
Check the tension on the belt as well as tension (“tightness”) of the v wheels… see if the gantry/carriage are not moving smoothly enough…
Check for dirt build up in the v wheels and on the rails… even a small amount of build up which can be hard to see will cause extra drag and extra stretching on the belts.

Is the change always exactly the same? Does it get worse with older bits? Have you checked your collet?