Hi there, I have noticed a few flaws in working with Easel. A number of occasions, the execution of the carving suddenly stops, repeating the steps again after refreshing (shutdown and open) makes it work.

I have also noticed that making a simple 3x3 grid, Easel works well with a 3x3 (external) picture of a grid. But somehow Easel does work with the “Easel button” of figures: like stacking of number of squares to constitute the whole 3x3 grid.

In working on the former 3x3 grid of 10cmx10cm squares, I wanted to change the drill, from 17,5mm to 2 mm to post carve out another pattern (originally on top of the square tile), using the same homing/starting postion: a complete havoc of work was repeatedly the result. See the different patterns right here below. 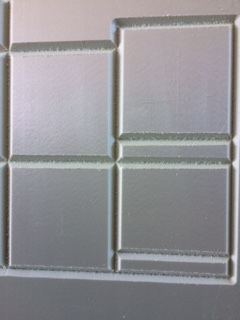 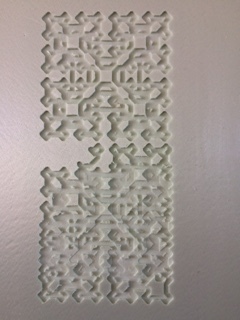 Separately I have seen unpredictable behavior in carving out, sentences and words. I tried to carve out a name of about 10 symbols, which worked well. Extending the 10- symbol word to make a complete sentence to carve out (well within the 790x790 working area of the x-carve 1000mm), stopped working at the beginning of the first symbol. I have not been able to resolve this one.

Confusing to me, is the US standard in inches and the mixing with the metric system used here in mainland Europe. Some part of Easel looks hard coded, and eventually allows it to co-exist (mixing it up), instead of consequently calculating it through.

Any idea what is happening here, besides divine intervention?

Looks to me like you are missing steps, which is more of a hardware problem than a software problem. Check your belts, pulleys, v-wheels for proper adjustment. It could also be your stepper pots are too high of too low.

Thanks, Rusty. I will certainly look at the stepper pots. I have secured all the mechanical issues like the belts, pulleys, v-wheels for proper adjustment: they were no problem.

Regarding the stepper pots: this is the least addressed issue in the x-carve manual, though the forum provides a simple “how to”.

Thus-far, and in the absence of electronic measurements, I iterated every form separately, in order to prevent cross-carving through the squares as happened before.

I’d also make sure those v-wheels aren’t over tightened as that can cause the issue you are having (personal experience).

As for stepper pots, I’d check out the thread below. You don’t need a multi-meter to adjust these as it’s mentioned in the video.