I’m still learning the machine and CNC in general, and I’m really having a lot of fun doing so. But with that comes some frustration when things don’t go as planned.

I tried to do a simple cut-out and slotting in some FR4 garolite material to do some fit-up testing of a circuit board. The material does not have any copper, it’s just the plastic laminate.

Looking at the slot in the picture, you can see that I do a plunge into the material, then move across the X-axis to create the slot. Then I move the Z back up to go onto the next slot.

All three slots have this weird characteristic where the Y shifts up a tiny little bit when I command the X to move. As soon as the X stops moving, then Y shifts back down.

As you can see, I’m not commanding any Y movement, but it still shifts up and down slightly. I figure something is loose, but I’m not sure where to look. 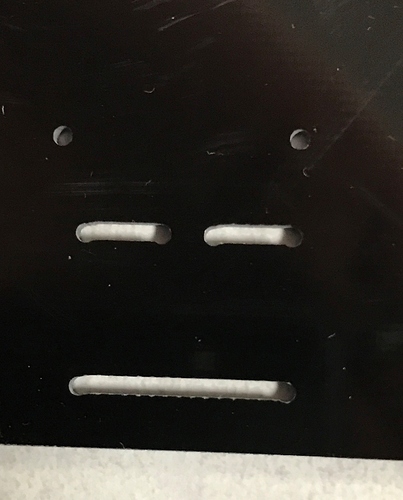 You are commanding Y to move .2 twice in your gcode???

EDIT: Robert has probably tagged your issue, not the gcode upon second reading.

Setting the Dewalt on 6 is way too fast as well. Try setting it at 1.

Thanks for the advice guys, I’ll try those things when I get home.

I was feeding at 60ipm and it was moving smoothly, but upon closer inspection, I noticed the inaccuracies. Something must be deflecting.

Looks like tool deflection to me, too deep/too fast.
G0 mean rapid and feed rate is ignored (G0 go at max set speed)

So, Phil. You running your X-carve with paper tape?

According to Wiki, M2 was used when paper tape was hooked end to end to make a continuous loop and the M2 signaled the end of program.

They claim that M2 is obsolete (but still implemented) and has been replaced by M30 as end of program.