Will the larger 269 motors work fine with a stock g shield controller? Amazon has them for 89.97 for all three. Just want to make sure that I don’t fry anything or cause problems. My future plans will be to make a customer controller. Next thing will be a z axis upgrade.

They will work just fine but you won’t be able to utilize their torque capacity at speed until you match them up with bigger drivers.
Note that these steppers are 76mm long typically and the space for Z motor is a smidge less than that, a mod may be required.

I would source out steppers with a low inductance rating (mH value) to better match the 24V PSU used.
Most are close to 5mH but less is to be found, down towards 3,5-4mH.

As Haldor said, I’d recommend instead of spending the money on the steppers, spending it on upgrading the controller.

You’ll get more out of your current motors if you do that since the Gshield can’t even drive the stock nema23 steppers.

Yeah I’ve been looking at the drivers and everything to start building one or just to get a x controller. I really don’t wanna mess with wiring up and with the orders coming in I don’t want to be down for time because I only have one machine. I ordered the lower size ones but in the 269 size.

Yeah I’ve been looking at drivers and like Phil’s build for how he set up his. I’m just getting more orders in and a shop that I’m putting my work into and I want something that will work well my other motors I just have a feeling that I’ve been running a lot of jobs on them and want to be able to upgrade to do more complex designs and things.

The motors won’t limit the job complexity. The controller will.

It’s better to do the controller over motors. You won’t get your moneys worth when you underpower them with the Gshield.

It’s like putting racing tires on a 1990s Geo Metro. The tires aren’t going to matter with the small engine.

You won’t notice a difference when you underpower them with the Gshield.

Using the gShield (limited to 2.5 Amps/phase) with a more realistic 1.68 Amps/phase you would have:

So, you don’t think that doubling the torque would be noticeable?

Certainly upgrading the controller first will give a larger advantage, but I wouldn’t say that a doubling of torque would not be noticeable.

In my opinion, the controller is the better upgrade than the motors for the following reasons:

Doing some comparison on the torque curves, the difference is not an exact double.

I also believe that the acceleration of the steppers could be tweaked/increased using the newer controller over the old controller.

Now, if you upgrade the controller, you remove the 60% multiplier, your stock motors go up to 140 oz-in which is only 21 oz-in lower than the newer upgraded motors and you get a controller that can give full current to both Y motors.

To me, that is the better spend of $90 than the steppers.

But. that is just my opinion and how I would spend my money. Everyone is free to spend their money how they feel it necessary.

You won’t notice a difference when you underpower them with the Gshield.

This was my issue. I maintain that you would notice a difference.

I don’t have any disagreement with your response, just this one issue.

My thought was stated improperly. I edited my post to better reflect my thoughts.

In the end I see this as A value proposition. In my opinion you get better value with the controller upgrade over steppers.

But, as Larry pointed out, simply by changing to a higher available torque motor you would get some benefits aka more torque.

In the end I see this as A value proposition. In my opinion you get better value with the controller upgrade over steppers

I’ve been talking with Phil to get started on his version of his controller and use Larry’s updated stable update for the controller I’ll be making. I under stand that it would be limited. Just my motors that came with the used machine are starting to show wear and with my much larger x carve I had, my x axis always would burn out if I was really pushing it. Looks like with everything for the controller build sheet with Phil’s it’s only going to be $190 or so for everything and cheaper then getting a x controller. Just updating and grading my machine since it’s been stock when I picked it up for $300.

Be careful where you buy your stepper motor controllers. One user on the forum got some bad controllers. Phil ordered the ones I did and so far both sets have preformed well.

Yup, that was me. I was lucky to be able to get a refund, I had ordered mine from eBay.

After a lot of debugging with Larry and other members we decided it must be the drivers. Ordered the ones that Larry ordered and everything is working very well now. See link below: 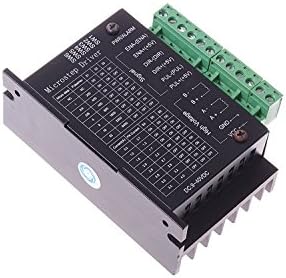 Sweet! I’ll check out that link for those! That’s what I don’t want to have happen is order something wrong or a cheap clone and then be screwed in waiting.

Yeah that’s what I asked Phil about when I was looking up all the pieces for his controller setup. I’ve had that happen with 3d printer parts where I ended up with wrong parts or boards and had a hell of a time with returning them because of hub stores that it’s in China but they have warehouses here and it’s all a pain in the ■■■.

Besides stepper torque and current capacity of the drivers, the third main factor at play in the torque game is input voltage. Xcarve is based on a 24V PSU and is a limiting factor.

If one have a certain amount of torque at a certain speed @24V you will double that @48V.
Rapid speed also (Upper RPM limit of a typical stepper is 1000-1200 which may come into play)

Not really necessary for an Xcarve but if one at a later date may want to use ACME/Ball screws this become more relevant.

Below is a known good driver for 48V PSU, there is also a version that will take up to 80V, the DM856.
For about $200 you have the core components for a controller that have more than twice the power capacity of the Xcontroller. 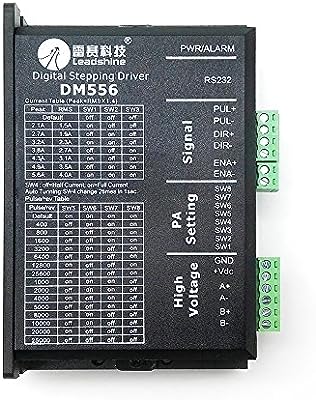 No, I think you’ll be fine with stock Z motor. 76mm is stronger, but not always required and I suspect you would need to run the rapid/acceleration ratio on Z pretty hard before maxing out the stock Z capacity.