In the past, I was going to upgrade my Xcarve but when there was a long wait for the parts, I cancelled the order. Now I’m considering upgrading again but would like your opinions whether to do it.

First some background on how I use my Xcarve. I have made some wood signs, some wood parts, I have also made some plaques and large picture frames. I haven’t used it with any plastics or aluminum. In the future, if I carve anything other than things out of wood, it will be rare.

I already have the DeWalt 611 router, Nema 23 motors and an aftermarket dust collection system on it.
I have had some issues with X axis maker slide flex and some calibration and tightening issues but other than that, the machine has been without issue. The tightening and calibration issues have been resolved so it’s basically the X axis flex that still needs to be addressed. Issues that are user error over the past 2 years have been plentiful though. I just started playing around with Easel and have used Vcarve Desktop instead up until now.

When I bought the Xcarve in 2015, I paid $1,491 with the upgrades. If I were to buy a brand new Xcarve, I would pay $1,278 for the same machine I have now except for the upgraded maker slide and new controller with the wiring. If I were to purchase the upgrades to make my machine the same as a new model (comparing apples to apples), I would have $1,965 invested (add $409 for the upgrade kit to the original purchase price). I would gain the side board that most don’t care for and a Z-probe that my original machine didn’t come with so maybe not quite apples to apples but close.

Another option would be to just buy the solid X axis maker slide for $49 and put it on the machine.

Another option would be to do either the 30 minute or 60 minute X axis upgrade for very little cost.

Thanks for your thoughts on this.

You’ll get so many different answers.

If you like the way everything performs, upgrade X makerslide only and be done.

If you want more, I’d recommend:

I do use a probe, but I use Charley’s 3-axis probe which helps with reliably finding the same zero position and the Xcontroller has it easy for probe connections.

I’ve used both Gshield and Xcontroller…the Xcontroller (or similar 4 driver controller build) is worth it IMO.

I’m in the upgrade the X axis makerslide only camp.

I do have upgrade plans, but not to my current machine (maybe the X axis makerslide someday). I’ll be building a new machine based on what I’ve learned in the last two years.

Wide slide! Save you money for bits and material.

X axis maker slide upgrade only it is then. Anyone have the Inventable 60 piece hold down clamp set? Wondering if I should invest in that too. I’ve had clamping issues since I started on this journey. The ones that come with it aren’t any good for thicker material and the ones I’ve made don’t do a very good job. 2 sided tape has been my go to choice but not very good in cooler temps.

Make your own clamps, there is a project available.

…I usually just drill a hole and screw the material to the waste board.

Can or will you share that with me? As you have seen I have built the cnc enclosure and would like to upgrade that aswell.

For interest sake, what motors were installed on the 2015 x carve?

Jim, I’ve screwed the material to the waste board too but being MDF, it doesn’t have great holding ability.

Bob, as a woodworker who mainly does traditional builds and also dabbles with CNC work, I can affirm the old saying of never having enough clamps definitely applies.

Did you do the upgrade to nema 23 yourself and was it worth it? Is the 2015 g shield power supply setup strong enough for the nema 23 upgrade?

That is amazing. I see on the picture top right that you have the Pause option. How is that done with the 2015 setup? i also see that you are using different motor drivers, what which ones are you using? sorry for all the questions, but this is really a beautiful setup to say the least.

I used my Arduino and the power supply to make my powerful controller on the cheap side. Pretty much everything that the x-controller has only easier to set the current settings.

The power difference between Nema17 I had before and these with the proper drivers is night and day. By far the single change that made the biggest impact on my machine. 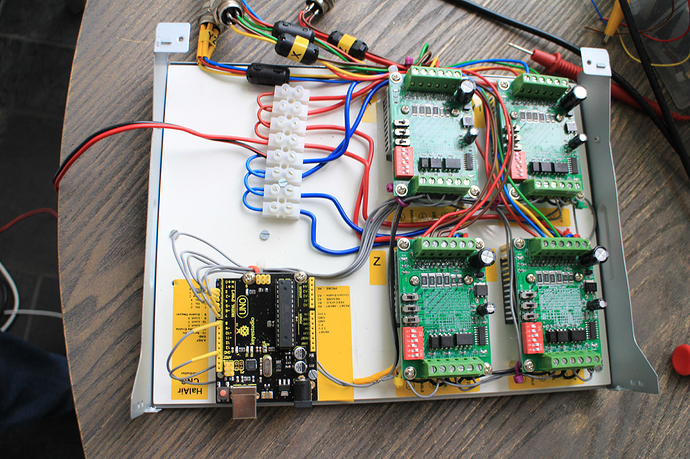 Switching to the wider maker slide for the X axis was a night and day upgrade for mine. I bought the whole upgrade kit (X Controller, Wide Makerslide, Probe, Sideboard) because it was cheaper at the time than the X Controller and wide makerslide separately.

If you do nothing else, I would suggest getting the wider maker slide.

For those who haven’t heard it yet.
2 Likes