What dust control system is that? I like the longer brushes

It is the Suckit dust boot.
However it comes with only 1" long brush and I wanted a little more clamp clearance.
So I ordered an 1 1/2 brush from McMaster Carr and cut it down to 1 1/4.
It works great.

Yes I did.
I took Jeremy Johnstone’s Idea and ran with it.
I still want to see what suckit comes out with though.

Did you route it out so the entire body of the router could go through the base plate? Or is that standard

No, it comes that way.
But it also comes with a shield that screws on from the bottom with a hole just large enough for the bit.
With the down draft from the router itself and the suction from the dust collector it is not needed, so I leave it off.

I took Jeremy Johnstone’s Idea and ran with it.

Here are the simple modifications:

Both are these products are pretty good; great value and features. Zplunge™ Linear Slide Assembly Suckit Dust Boot However they currently don’t fit 100% together. Here is my version 1.0 mashup of the two. 1.0 has some issues - the boot is too high. Only will reach 1/2" material. Version 2.0 with the two notches might fix that (the rails will be lower)! Or use longer brushes! Anyway, first a test run! [IMG_9613] I cut a notch in the aluminum rails to fit around the X carriage wheels. …

I highly recommend to do what @JanVanderlinden did; two notches in the aluminum rails for the two bolts instead of one.

@JanVanderlinden I am glad you are enjoying it and I must thank you for being patient. This is the first production run of a new product, and my first time bringing a structural / mechanical product into production (not including circuit boards etc.) so it has been an interesting learning experience. It’s one thing to design and build a one-off item for yourself but making a quantity of them presents a lot of unique challenges!

I should finally be getting a test unit to the Suckit team in the next couple of days and hopefully I will be getting one of their test units to perform my own validation with. I wanted to make sure the users who had issues were able to resolve them and I think that is moving along well now. 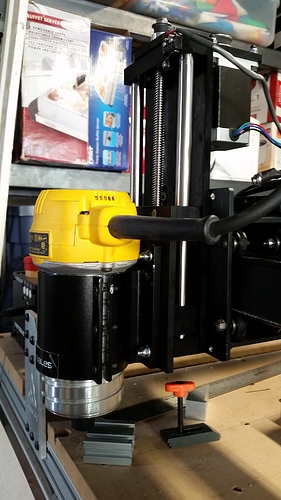 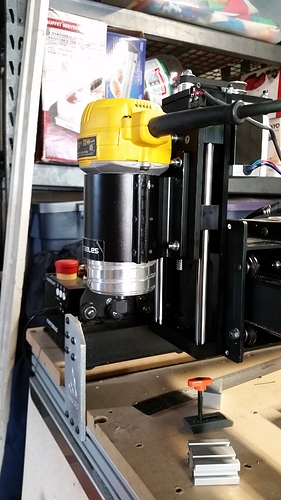 @EliasPolitis, I think you’re right about the gear ratio, but to be clear on the semantics with your following examples - when you say “halve your ustepping” I presume you mean with the microstepping value considered as a ratio (i.e. 1/2 steps gets halved to 1/4 steps). Some people would think of 1/4 steps as more microstepping (more microsteps per full step) than 1/2, so just wanted to be clear. (For instance, the DRV8825 datasheet has the verbiage “…full-step up to 1/32-step modes…”)

In any case, doubling the motor pulley on the Z is a change many people make with the intent of speeding up the Z axis, since it is pretty slow relative to X/Y, so it can slow things down a lot when doing a carving job with a lot of retracts. By virtue of the screw drive, the Z axis has much higher resolution than X and Y already, so cutting that in half can be a reasonable trade. The bigger motor is there to make up for the halving of mechanical advantage due to the new taller gear ratio.

when you say “halve your ustepping” I presume you mean with the microstepping value considered as a ratio (i.e. 1/2 steps gets halved to 1/4 steps)

Anyway, I just wanted to point out that by changing the gear ratio from 1:1, one way you favor resolution, the other way you favor speed.

Hi are they for sale yet

I was finally able to get the z-plunge installed, and also received the wide rail suckit upgrade kit installed. This rail is a major improvement over stock, and while there were some hiccups early on, everything Kyle sent to correct the issues have worked flawlessly so far. I should mention that there is not an additional extended plate that mounts to the existing spindle mount plate. It is a replacement spindle mount plate with the extension, which is the right design direction in my opinion. I had the old z removed and new one carving in about an hour. It’s a very straight forward install, and truly a drop in replacement.

The suckit upgrade kit was also a breeze to install and came with everything except the aluminum rail sections, the shoe, and brush. The kit included 3d printed “y axis” extensions to account for the additional thickness, and 3d printed “x axis” extensions to mount to an existing acrylic shoe as opposed to all acrylic parts. I don’t see any reason why the 3d printed parts will be any less effective, but thought it was worth mentioning. The suckit is a proven design already, and this kit is no different. It works great, and if I were in the market for another shoe, it would my go to. 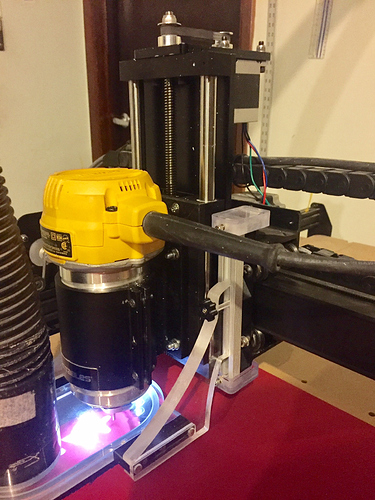 Suck it upgrade kit? Where did you get this?

Does it come whit the threaded rod ?

@ScottBongiorno The Zplunge kit can utilize the acme rod included with the original X-Carve kit. I do have some custom longer acme rods which I can make available if necessary.

@KyleKronyak So at this point has the drop plate been integrated into the design on the new model? What is the lead time if i were to order one today?