Upgrades and a new Phil inspired waste board

I’ve had a ShapeOko2 for awhile and when the Xcarve came out I upgraded and moved to the 1000mmx1000mm version. Life happened and I didn’t touch it for about 8 months Then I saw Phil’s post regarding his new waste board with T-track and MDF and that lovely .25" aluminum plate!! It fit everything I was looking for so I started gather pieces as well as looking at what upgrades could be added as I built. I did the 60 Minute mod for the X axis and added the .25" aluminum “L” to strengthen the Y rails.

Here it is in its current status, I wanted to show my homage to Phil’s waste board 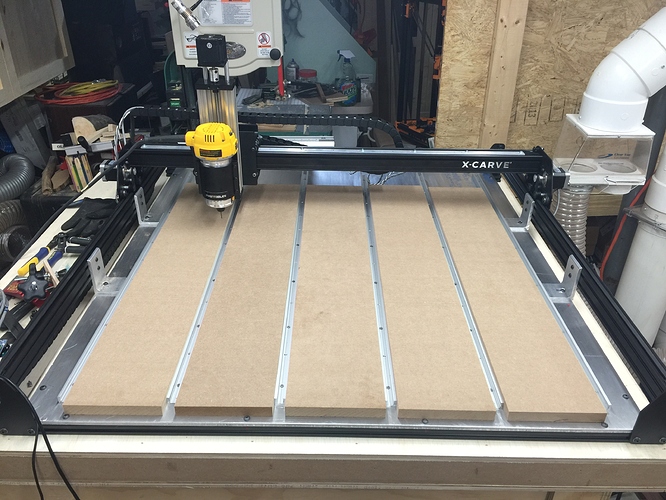 I still have to cut the holes for the 1/4-20 nylon bolts to hold down the MDF, but I wanted the Xcarve working to do that, some axis calibrating and it will be ready tomorrow night.

Xcontroller comes at a later date.

Looks great. If I may ask, where did you get your aluminum plate and how much was it?

So I followed Phil’s guide to the letter and even called the same place he found the aluminum plate, speedy metals. I called a couple places locally but they didn’t have what I was looking for, so I called Speedy and they were great. I figured that if they could come in around the same as the 1000mm pre-done waste board I would go for it, they came in at $147 shipped to my door and I’m near Buffalo, NY so I was happy with that. Added on a chunk of the 1/4"x2"x3" “L” from them as well. Whole thing came wrapped in two sheets of plywood. The t-track I purchased from orangealuminum.com.

I think after so many holes the tap just gets a bit brittle or I just sped up too much.

So after using the scarce to cut out all of Phil’s other upgrades, here it is just after finishing its first cut. 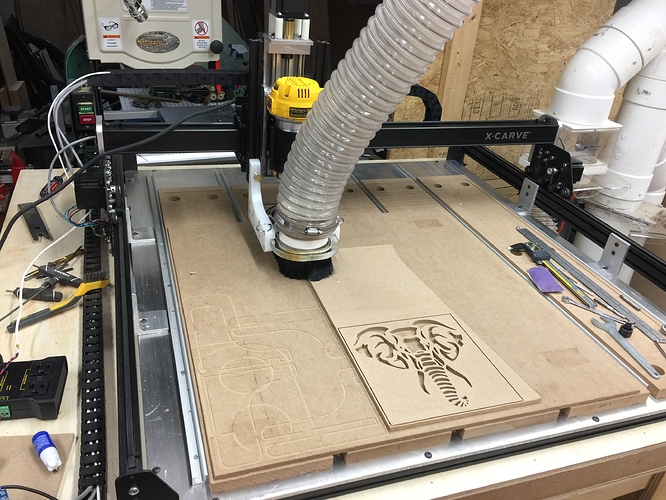 Now to look at adding my laser and cutout Phil’s pen/wood burner holder.

The lift was great!!! having the extra room is so nice when you have the need to carve blocks that are 3.5" tall

I was wondering if you used your x carve to mark the holes in the aluminum plate or did you measure by hand?

I did mine by hand

I actually have been calling metal suppliers this morning. It is crazy that Speedy Metals can get that plate SHIPPED for $147, but my two local suppliers can’t get me the plate for less than $384. What the hell is with metal prices?

Had the same issue, all local places just kinda laughed at me when I told them I could get it for cheaper online, crazy but true.

If you think that is crazy, try calling places that have a water jet to get them to cut you parts from 3/8 Aluminum. I even had everything ready for them in .dxf format, they still wanted hundreds to import the file, the cutting part and materials was cheap but to have someone load my .dxf, crazy expensive. finally found a real cool small place about an hour from me willing to do the whole job for a reasonable cost.

This reminds me of maybe 15 years ago when a photo processing place down the street from work got into making prints from digital and said there would be a $10 “media opening charge” in addition to the cost per print. I laughed and walked out, don’t remember when they closed up shop for good.

That boot is 4" and its also based on Phil’s design and parts were cut with x-carve via Easel.

You would not know where these files are would you? That would be a great help i am just getting started. Thanks

I just modified the plans a bit to accommodate the 4" dust hose and made an adapter out of 2 rings of 3/4" MDF glued together.

I would totally use it too if I was redoing my dust collector. I have given the X-carve to my father who is a machinist by trade and retired - Mine looks a bit different now 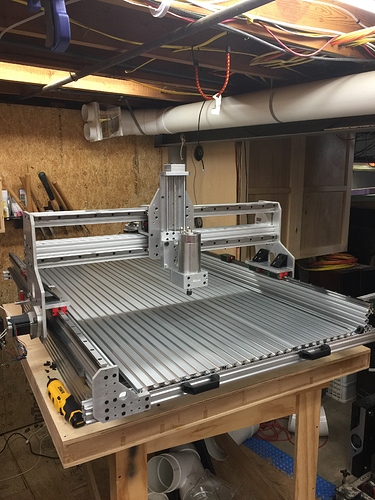 Do you have the order or a spec sheet so i can just reorder the aluminum sheet from speedy?