Just received the new one piece x rail and started fitting it in place of the old dual rails.

I noticed that the V Wheels were not aligned with the edges of the rail, they are too wide and not centered.

I had the same problem with the dual rails and just assumed the gap between them was too narrow and adjusted accordingly. This seemed to result in the V Wheels sitting at an angle instead of straight and explains why it had issues moving smoothly in the X direction.

Only fix I can think of is to add a second spacer infront of the V Wheels to center them better.

Picture attached but it is not obvious because of the slightly distorted camera perspective.

If u try taking a picture of just one of the wheels dead on intstead of getting both of them in the pic, the angle will be more obvious in the pic!!

True, the angle is not so much the important thing though, just a side effect of the v wheels being pulled inwards by the rail. It is more an issue of why the v wheels don’t seem to be centre with the supplied spacers.

Yes, I know that. I just figured since u took a picture to show it, maybe you would want a pic that actually shows it!!! I only suggested it because I see on here all the time that a picture is worth a thousand words, and also that the more info/pics someone has, the better help they can get! U never know what someone else can see. I’ve been surprised by a pic I posted that I couldn’t tell what was going on but others could right away!!

Rainy, dark and cold out atm so that would have to wait till morning.

However the gap is still visible in the above pic.

I have attached a blown up version with red lines showing the centreline on the v wheel and yellow showing the ridge of the rail, you can see it is not centred, it is the same on both sides.

Rain let up so here you go… 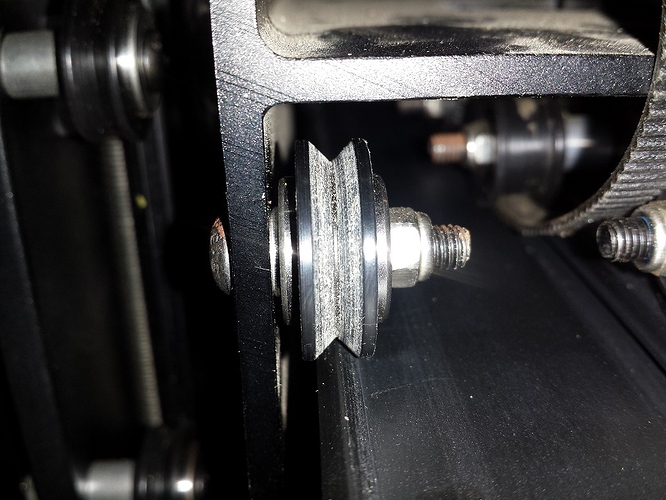 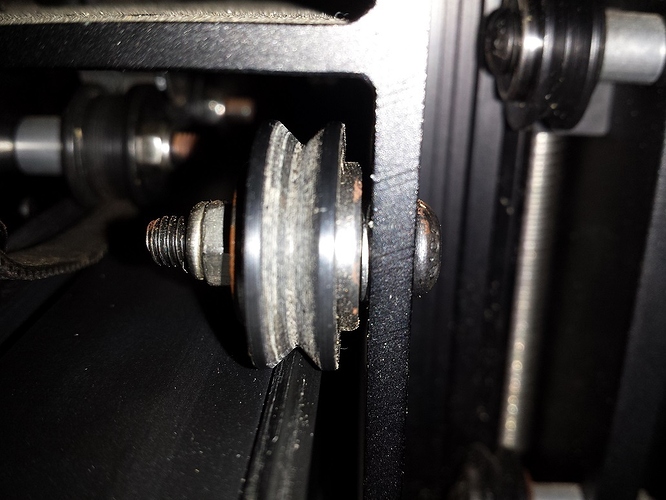 I finally figured it out.

I didn’t trust the button cap screws as they always seemed a bit wonky, possibly bent so I replaced them with some high tensile strength screws that happened to be silver instead of black then the problem stuck out like a sore thumb.

Either the mounting holes are misaligned or the x carriage is malformed, but either way the v wheels do not line up properly, which also explains a second issue I had where the z axis always seemed it was sitting at a slight slant.

So looks like I need a new x carriage. 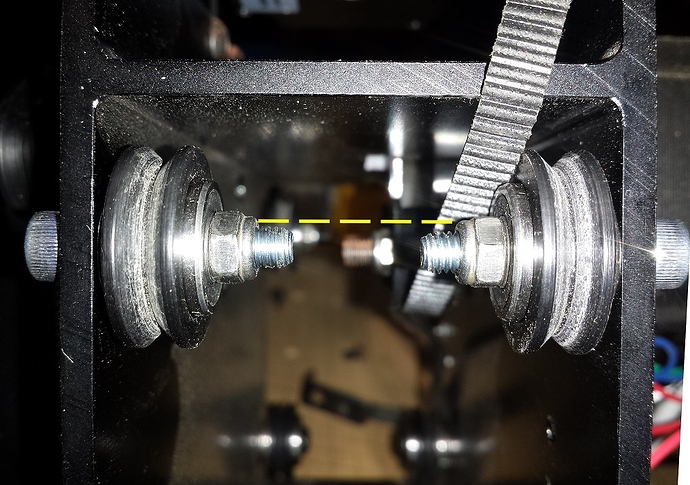 I used through bolts on my Shapeoko 1 when I upgraded to double X-axis Makerslide.

They afford a reasonable range of adjustment and increase carriage stiffness on an SO1/2-style machine.

Some hardware stores will have both Form A and B M5 washers which vary enough in thickness one can tweak the spacing. Alternately mix in suitable Imperial washers.

I Feel your pain, I had to order a new carriage extrusion because the eccentric nuts bit into the aluminum at an angle, and the problem became more apparent when changing to the new makerslide