Just curious if anyone uses this and does it actually work? If I move my spindle 10 inches in both the x and y axis, place another board in same position, will the “use last home position” actually work?

Stuck at work and won’t be able to use machine for couple days to try it. Thanks.

I usually set the x,y back to where it was, raise the z about an inch, loosen the old bit, put in the new one loose enough that I can bring the z back down, while holding the bit in the collet with my other hand. I lower the router onto the bit, with the bit touching the material I’m going to carve at z=0. Once the router is lowered onto the bit in the appropriate position, I tighten the collet and set confirm this position as the new home position.

Saves a ton of time and can go from one bit to another in less than a minute.

Also, I correspond with @Zach_Kaplan occasionally and I requested a homing of just the X, Y axis as an option in Easel. I believe they’re going to put that in but can’t be positive yet.

I could get it close to the home position then us it with no issues it sounds like. The 10" was just to overplay what I was going for. Just looking to see if it actually remembers my previous zero between jobs.

I use that to find zero. Iv had lots of issues with UGS so I use it for finding zero then import my gcode to easel. I’m hoping to utilize the “use previous home position” on easel so I don’t need to switch to UGS each time to run the 3 axis zero code.

I have contacted Zach Kaplan and Easel Support. They are looking in to updating the G-code Spec. for Easel so that it will allow the use of my g-code to reset your zero position. As of now the G-code I use in my Automatic 3 Axis Zeroing uses probing commands and a command to set each axis at zero. They are all standard G-Code commands but not part of the G-code spec for Easel.

I sent Zach a copy of a G-Code file that will zero all three axis at one time. He promptly replied and told me to send the exact same email to Easel Support, which I did. I got a reply from them about a week later saying that they were going to “pass it around” to the other Easel developers to see what they think. I haven’t heard anything from them since. These things don’t happen over night though.

So unfortunately for now, If you are an Easel User, you will have to continue to Eyeball your zero’s. If you want to get a quick, easy, repeatable and very precise zero position in Easel you will have to exit Easel and zero you system with a touch plate using UGS Or something similar and then go back into Easel.

This is precisely why I use PicSender for everything. I use multiple bit’s all the time. I made this yesterday. It uses 3 different bits and a separate g-code file for each. When I change bits I simply re-zero my machine with the 3 axis touch plate, load the next file and click go. Because the zeroing process is so accurate with the touch plate, you can never see any deviation in the tool paths.

I am but one voice, perhaps if the other 75 owners of my touch plate spoke up along with dedicated Easel Users that would like to be able to use it, maybe they would look into it more closely. 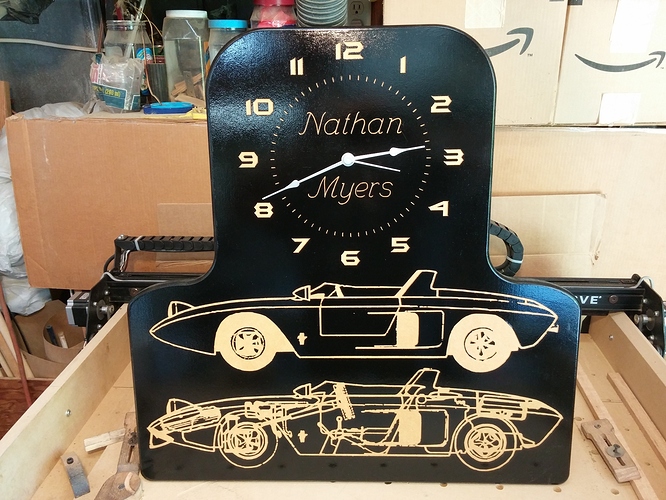 Going to look into picsender next chance I get to be in the shop… Just can’t bring myself to send a project through UGS with the issues I seem to always have with it.