Used slic3r to generate g-code and imported to easel 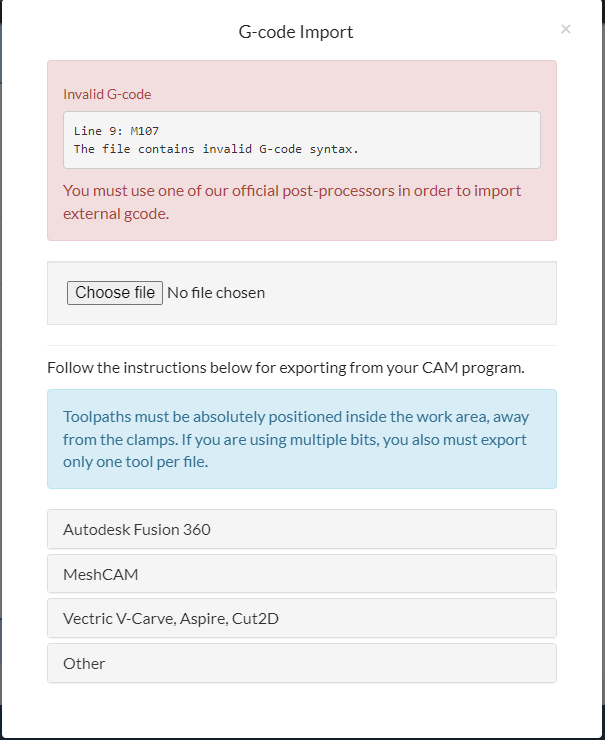 Look for Gcodes that are not supported in your file. A list is in here. GitHub - grbl/grbl: An open source, embedded, high performance g-code-parser and CNC milling controller written in optimized C that will run on a straight Arduino

Youd have to use an easel post processor which is setup to only use syntax that easel supports.

Are you using a laser or 3d printer for this project? If not You could try deleting that M107 line which is a laser/3d printer command, but odds are you’ll just get another error with a different usupported syntax.

Slic3r takes 3D models such as .STL files and creates the G-Code for moving the print head and extruding and retracting filament. It is not designed to create tool paths to direct the motion of a CNC router to mill away material.

In the CNC world, there are other programs which are like slicers that create the tool paths. One such program is Vectric’s V-Carve. There are several others as well.

For 3D printers I have used Cura and Prusa slicers. For my CNC and my laser I have used Vectric V-Carve Desktop.

Exactly What Harry Said. Ignore my prior comment about deleting that line, it won’t help at all.

You need a CNC gcode software: Easel, Vetric, Carveco, Fusion360 has a machining module, but you can’t use a 3d printer gcode on a cnc they use different versions of grbl in the controllers and have a different library of acceptable commands.