Using 2 bits: Specify which to use for a specific shape/vector in easel?

My design is a pattern, with a circle around it to cut it out. I’m using a detail bit & rough bit, and the detail bit is a v-bit.

My problem is that Easel wants to use the v-bit for the full-depth cut that cuts out the circle, and I can’t seem to force easel to use the rough-out bit for this instead, which means it’s trying to do a full-depth cut using a v-bit that isn’t even able to do that deep of a cut.

To accomplish what you are trying to do, you need to move the outline cut to a separate workpiece and set that workpiece up to use a single bit.

We get this question a lot, and we are looking into possible improvements to the workflow on this.

Thanks Jeff, that’s a big help. I’m sure you’ve heard this request too, but allowing more than a single “rough” and “detail” bit would be extremely beneficial. 3-stage tooling would probably save, at a rough estimate, 25% carving time: Large rough bit, then smaller rough bit, then detail bit. Especially for carved that have both lots of detail and lots of open areas to remove: a .25" bit to do the really rough stuff, then 0.125 for the close-in roughing, and 0.03125 for the final fine detail, etc.

It’s been a few years and there is still no change to this work flow?

Ya. I’m hoping for this functionality for the exact same use case. Currently I also do the multiple workpiece, but it does clutter up things a little, and also makes it difficult to use the preview functionality…

I will be unsubscribing due to this lack of functionality that’s so basic.

That’s where V-Carve pro gives you a much more traditional multi-tool carving strategy (I don’t know if there is an actual limit in V-Carve Pro for how many tools on a single operation can be added) I’ve only done up to 3 (I mean on a machine like an x-carve how many tools do you seriously own? Like a 1/4" followed by a 1/8" followed by a 1/16" then a 1/16" ball-nose or a v-bit seems about the limit to any job I’m likely going to do. But the dialog looks like you could add as many as you want. 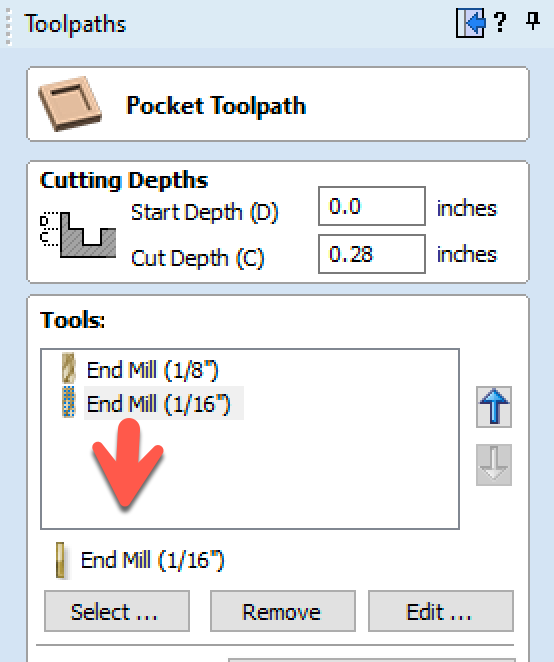 bringing this one back from the dead.

I would LOVE to see this added to Easel. My FoxAlien 4040xe simply cannot run that 30 degree vbit through a quarter inch of aluminum plate to cut out outside of line.
it would be awesome to be able to click a specific shape and tick a box that says “Use roughing bit for this shape” or something equivalent. Sure, I can just duplicate the workpiece and do the settings differently, but if we can already “pin” objects in place, why not specify which bit to use too?

I’m also bringing this up again. I’m having the same issue. Easel describes the 2-stage carve as getting as much as possible with the larger roughing bit and then using the smaller detail bit just to get the small areas that were missed. This is not the case. My file has many large areas with a few tight corners where shallow pockets are cleared out. Ultimately, the entire shape is cut out. When I initially setup the file with a 1/4" bit, about 90% of the file is able to be carve with a few small areas missing. It shows no problem cutting the outline with the 1/4" bit. The simulation estimates 1hr 5min. When I add a 1/16" detail bit, the cut line switches to using the 1/16" bit and the total job takes an ADDITIONAL hour. There’s no reason to use the smaller bit for cutting the outline. It’s doubling my time and putting additional wear and tear on the smaller bit. Is there any way to specify which actions are performed with each bit? Is there a problem with cutting the outline and then going back to clean up with the detail bit? Too much movement? I really don’t want to create an additional workpiece just for the cutline and have to change the bits out 3 times. There’s also no nice way to separate out the carves so that the detail bit only cleans up the edges.

Can you share the project?
Go to project >share and change it go unlisted and then copy that link and paste it over here…

But after rereadingt the issue im not sure sharing it will actually help.

Easel preserves the perimiter cuts for the detail bit, thats always the case.
It does this in Case the perimitet does have smaller details, but doesnt think it through in the event that there are not small details, it just does its normal computations… erring on the safe side and using smaller bits for perimeter.

Some sort of improvement on this feature would be great.

I have super small lettering that I want to be able to have a V bit just scratch the surface on, would only take 1 pass. Then have a 1/8" bit cut out arround my letters.

Right now Easel is either cutting out arround first, which weakens the piece from the main workpiece, or it trys to cut it all out using the vbit.

I know secondary work pieces work for this but its combersome and both have to line up perfectly… having the option of having a previous work piece non cut layer show up would work too, that way I could see exactly from the other work piece where my words are and cut out arround them.

So, its obvious that the demand is out there for this option. Why is the toolpath still so…autonomous(?) Now, I only have 5-day experience but I can only imagine this would be a basic feature for this kind of software. Like a: Assign Object to Bit function or something.

As soon as I experienced the problem I exported the Detail to it own worksheet, but that was my HACK until I had the time to look it up. Then I find out that is the Official solution?!?

I was wondering why there was such a big gap between these software prices, but its starting to make sense now.

your workaround is the current official (non-official) solution… However I did get wind of them (easel dev team) looking into an assignable bit solution as well as possibly including 3 bits instead of just 2.
.
I’m not sure what that would do to the current issues with toolpath generation limitations of using a browser to run the software though… I speculate that it’s about time to offer 2 softwares, one using a browser and another installable program with higher PC spec requirements and access to more of the processor and RAM…