For my current project I need to remove a very large amount of material to make some large pockets. To speed things up, I decided to use my 1½" spoilboard surfacing bit, the Amana Tool RC-2249. It has replaceable blades, and looks like this: 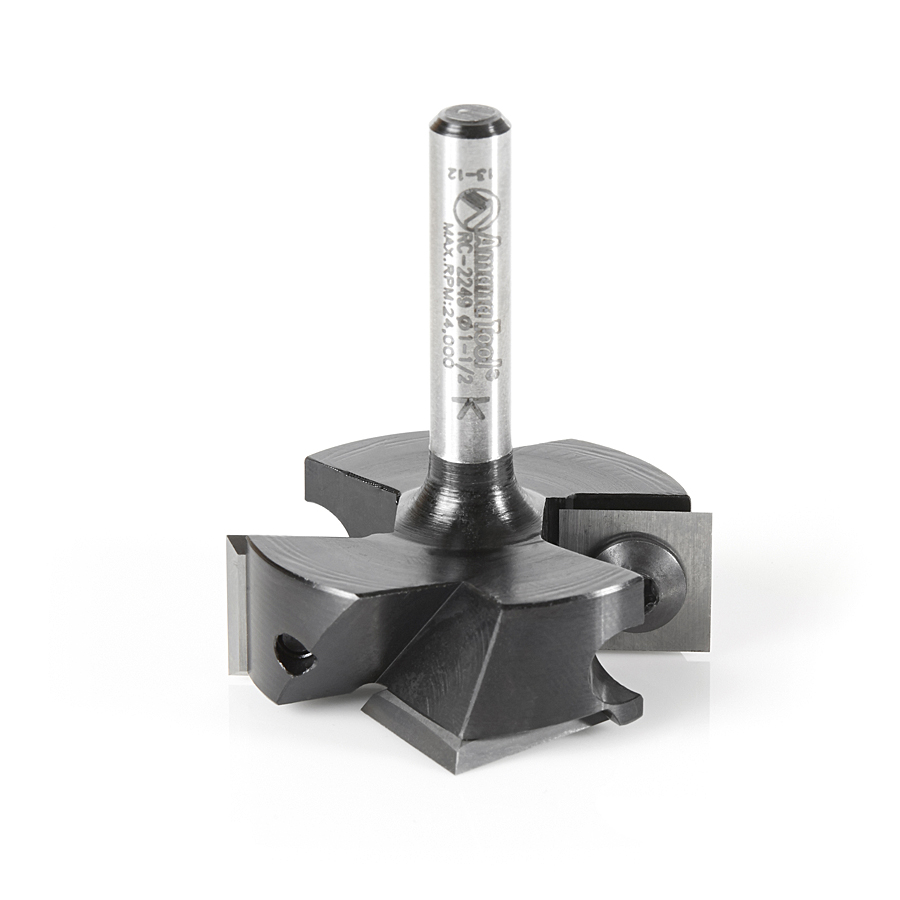 Did it work? Yes. Would I do it again? Almost certainly not. The result was quite decent, but I ran into a number of issues that were all related to the amount of material/load:

So overall, I would say I got lucky, but would not recommend this. I went back to my ¾" bit for the next piece and it is a much more pleasant experience.

What was the size of your vacuum port?

What was the size of your vacuum port?

I wouldnt even consider spinning that with the Dewalt at 16000 rpm.

The original SuckIt has a straight 2.5" coupler and the difference in airflow is dramatic.

I run the 1" version of that in my Dewalt for surfacing. It’s all about the depth of cut. 1mm is a bit aggressive.

Would changing to the Hitachi make a big difference in carves? Does it require any additional upgrades to get it up and going? Mount change (I have the z-slide from cnc4newbies)?

Would changing to the Hitachi make a big difference in carves? Does it require any additional upgrades to get it up and going? Mount change (I have the z-slide from cnc4newbies)?

You need a different mount, most likely custom

If you search around the forum for “Hitachi M12VC”, you’ll see a few different posts by folks (myself included) on how they rigged the mount.

The original SuckIt has a straight 2.5" coupler and the difference in airflow is dramatic.

Ah, that’s a bummer. Honestly I’m becoming less enamored with my Suck-It as time goes on. It’s a bit fiddly and not as solid as I would have hoped.

If you search around the forum for “Hitachi M12VC”, you’ll see a few different posts by folks (myself included) on how they rigged the mount.

I’ve read through several of the threads just now about the Hitachi upgrade. I’m a little worried about the weight of the z-slide I’ve got and the heavier Hitachi. Is weight still an issue with this upgrade? I’ve got the newer X axis makerslide.

I’ve found that as you approach 200 IPM, the flex of the stock Z axis becomes an issue. You’ll see a lot of deflection and carves will not be accurate.

But that said, 200 IPM is quite fast for an X-Carve. At reasonable IPM’s, I haven’t had an issue. That said, I still plan on upgrading to the linear Z axis for increased rigidity.

One of the nice things about the Hitachi, though, is that you can drop down all the way to 8,800 RPM. That’s almost half the minimum RPM of the DeWalt 611. This lets you run nice, slow carves at as low as 40 IPM or so with the Hitachi, without generating excessive heat or noise like with the DeWalt.

Awesome, yeah I’ve just gotten brave enough to break into the low 100s for speeds. What’s the benefit of running carves so slow? What kind of material would that be good for? Aluminum?

Since the X-Carve isn’t a super-rigid machine, a lower feed rate (IPM) can give you a better result in terms of accuracy and finish. There’s less deflection, less stress on the belts and the motors, and less backlash when changing directions. At lower speeds, the motors also have more torque, making it less likely that you will miss steps.

The whole job is also quieter at lower feeds & speeds, and dust & chips are generated at a lower rate so dust collection can keep up more easily. Everything goes a bit more pleasantly.

At first I was really optimizing things to carve as quickly as possible and get a short run-time on the machine. Over time though, I’ve realized that the setup time for a carve is big proportion of the overall time, and it doesn’t get any faster by running the machine more quickly.

In fact, I actually end up spending less time when running the machine at lower feeds & speeds, because I feel comfortable enough to not be stressing out and watching it like a hawk for every second of the job

But, there’s also a point when too slow is harmful to tooling, the machine and potentially the carving.

If you don’t move fast enough, your tool will sit and spin and rub and not cut. This reduces tool life and also can cause burning as the tool heats up. You produce dust and not chips which can junk up Vwheels quicker and cause health issues.

So a balance must be found. Most people find that balance around 60-80 ipm with a 0.3x diameter depth of cut. Those are good numbers that probably maximize most carvings. If you want to speed up a roughing pass, run faster and deeper, if you want a nice finishing pass, run shallower and slower.

I have the Hitachi mounted to the belt driven version of the original Newbie 5" - 6" Z slider. I chose the belt drive one because I was concerned about all that extra weight hanging over the front of the machine. (I have 270 oz/in motors). I set it up in Feb. of last year and have no complaints about the belt drive system. And would do the same all over again. I also have a Makita hooked up to a Newbie direct drive slider and have found that the belt drive unit actually runs smoother than the direct drive. 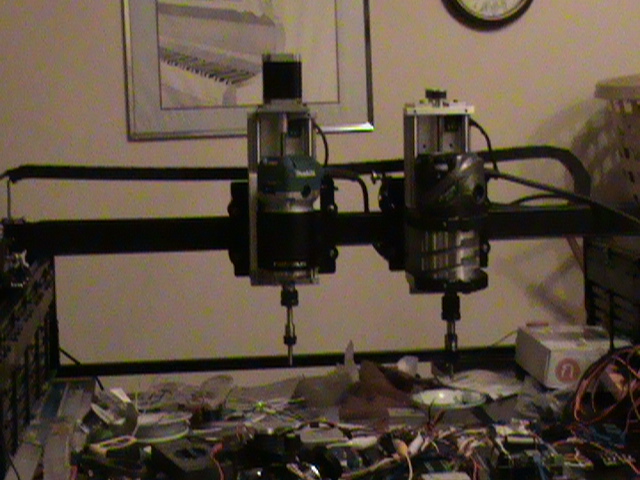 I got the Hitachi mounts from ZenBot. They came with a backing block that I didn’t use.