Hello, I am a high school math teacher, teaching geometry, and I would be very interested in teaching a math curriculum around a CNC machine, such as X-Carve. Although I have a good amount of programming/Arduino/electronics experience, I have not had any CNC experience.

Is there a math curriculum based around CNC that people know of?

Is this a good idea? Is it achievable?

I don’t know of a specific curriculum but you could totally incorporate it into the class to engage the students. You can replace the spindle with a sharpie and it becomes a drawing machine. Our Easel software is free and delivered online so students can do projects at home as well.

It sounds like a very cool (and fun) idea that would engage the students with real life applications. You could start with learning and then carving basic shapes and then move on to more complicated topics with more complicated part designs.

Just tried Easel, I understand it is being developed, but it does seem like it doesn’t have a way of entering in paths based on measurements. (correct me if I’m wrong here)

I DID notice that you can import SVG files though, and GeoGebra has a way of exporting SVG files.

Seems like it could be a marriage made in heaven.

One fun math application is the “Traveling Salesman Problem”. People often use variations on it to draw line art. Google TSP Art.

There are also many math based methods of converting a gray scale image to something that can be cut or drawn.

My son used my Shapeoko to create a project for his calculus course. It involved cutting out the areas under the curve of an equation and building a 3D model of what the integral was really calculating. Everyone else in the class built models out of cardboard, his was made from MDF and looked like a modern art sculpture. His teacher made him give it to her so she could show it to future classes.

@JacobCorbin I think it would be really awesome to teach a math course around a CNC. I’m a developer on Easel and can tell you my day consists of plenty of math (mostly geometry). I might try to write up some of the most interesting problems I’ve faced while writing CNC software. I’ll keep you updated if I get a chance to do it.

@JacobCorbin you can enter precise measurements in Easel. You enter the position and size on the Shape tab.

thanks, I was able to figure that out. I’m sure you all have a large laundry list of capabilities you are adding and issues, so you probably don’t need my 2 cents. Looking forward to seeing Easel develop!

We would love your 2 cents if you’re willing to share!

well, when I had a rectangular shape at an angle, I was unable to change the position by typing in a new value, it just reverted to the old.

Off the top of my head:
It would be nice to have point-to-point input, instead of only the given shapes. Rectangles and stars are only so useful. Like in photoshop/flash, having the ability to add control points and adjust the shape would also be nice. Start with a shape, add a point, adjust the shape.

Plus being able to do an “autocad” type entry, such as “next point add 4 to the x” instead of the actual x,y values. It would be good to be able to put in a corner radius for rounded edges.

Really it seems like at this point I would just want to use a different program to create the shapes if it was any more complicated than a simple shape, and I think I would be fine with that.

But I suppose more importantly from the CNC milling side of things:
you only have bits that are straight, you might want to be able to bevel a curve using a router bit, or even a bevel created by a “staircase”. Or using an undercutting bit, where the path would have to go around existing material to make a cut. Getting the feed rates/positioning vs material would be important here.

I don’t even have a machine yet, so I’m just thinking of how this could be useful to me.

Another question I’ve got, now, is some safety concerns. I imagine I would have to consider cut fingers, eye safety, and even dust and smoke issues possibly. Would I be limited to certain materials, for instance, does cutting certain plastics release toxic fumes? Does anyone have a resource for me to look at? I thought of this, because I was thinking how cool it would be to make some MC Escher “birds and fish” vinyl tiles, since vinyl tile is cheap and 12"x12". But then, I was wondering if I would be exposing the class to fumes.

As for cut fingers, I might imagine that an “electronic eye” around the perimeter of the cutting area that would sound an alarm and shut off the power to the spindle if it detected anything like a hand, might be a good thing to have, but it probably takes a while for the blade to stop. I suppose if it’s dragged a little bit into the material it could stop the spindle from spinning, but possibly damage the bit/machine. Having one of those dust collecting covers might be the best solution. Perhaps making a dust collector with a high efficiency filter, that’s hopefully not too loud, would help with most of the risks.

And as a tangent, can you paint a white vinyl tile black (or a black vinyl tile white) and then carve it shallow to make a high contrast sign? I suppose the x-carve could be used for cutting vinyl stickers too?

In general when it comes to safety, it isn’t a good idea to rely on software to shut down the machine. Physical barriers are the only way to go if you are concerned about people reaching in. At the University of Chicago (my alma mater) we have a shapeoko in a full plywood / acrylic enclosure, both for safety and for noise / dust containment. I’ve seen several enclosures over the last couple years, but it doesn’t look like there is a dominant solution for this problem. 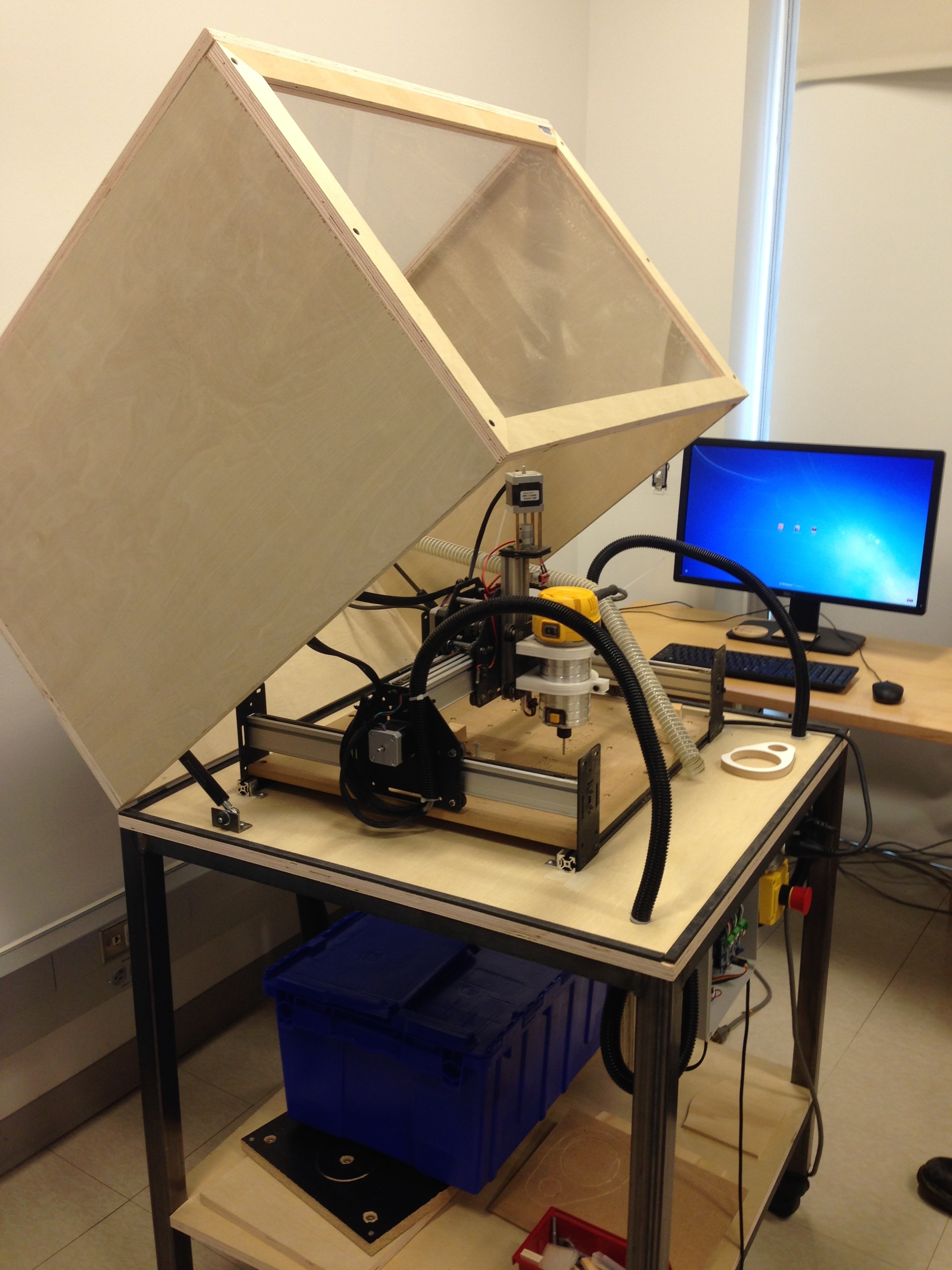 As to the material concerns, I know that with laser cutting you have to worry about fumes (particularly from acrylic and other synthetic materials) but I do not think that is a problem with milling. But our CS team would be be able to give you more specifics about that, probably @SamAlaimo would be the best to ask.

Another solution to the cover situation is Carvey. We designed it to be quiet, clean, and easy to use. It is best suited for a classroom, studio, or office environment. Since it has a cover you don’t need safety glasses and the debris stays contained inside. When the job is done you can go in with a vacuum to tidy up. 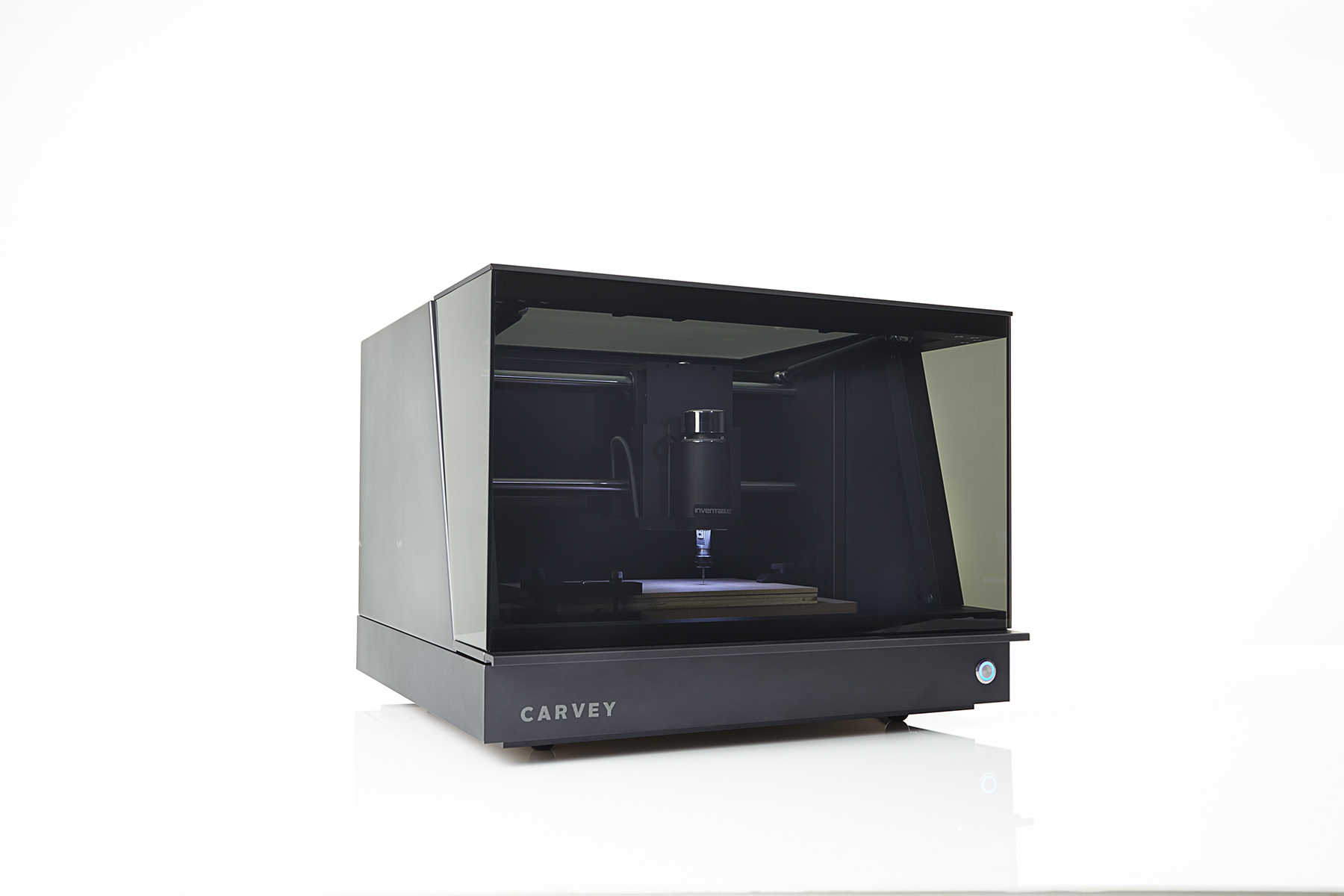 If easel isn’t the right solution for u. You might want to try Corel draw. Very power full vector based software. nice transforming tool ultra precise. Node manipulation. Student copy is available. 2 dimensional for now Corel is writing a 2.5d version now. also Corel has a huge on-line data base with tons of help. reason i use Corel i had previous experience with a Gerber sabre cnc. that was 4 feet by 8 feet

If u want to do 2.5 and 3d then rhino cam is nice. i have downloaded the Vetric software inventables has but haven’t tried it. Easel is a great free software. i have used it to convert my files from corel draw and illustrator with ease. Only draw back is it does not support of-line operation. so instead i use a g code sender. My machine runs off a old xp computer.