Using X-Carve - I'm getting worse instead of better. Help?

My first carve (outside of the test carve) was a beautiful 3D rosette which turned out swell except that my step over could have been smaller.

Since then, everything seems to have gone downhill…

Yesterday I planed a piece of wood (fir) to size and started a carve for a curved piece of molding that I had modeled in Fusion. I exported to the Easel gcode and used Easel to send it. Immediately upon starting, the thing went nuts. The bit carved into the wood completely randomly and squiggled around until I cancelled the carve while yelling choice words.

I had this happen once before when there were some loose connections. So this morning (after cooling down overnight - me, not the bit) I decided to give it another try. The carve path all looks great in the easel preview, so I checked all my nuts and belts and then started up the carve and went to home the machine. Z was fine. X was fine. On Y it closed the limit switch and then kept trying in a stuttering fashion. It didn’t break the limit switch, but I had to turn off the whole setup via power strip. I let things rest, turned it all back on, went back into Easel to re-start the homing process. Z was fine. Then on X it did the same thing it had previously done on Y - closed the limit switch and then sat there stuttering.

I don’t know what I’ve done to ■■■■ off my X-Carve, but it certainly has it in for me. Since my first two carves, everything I’ve done has gone to crap and it keeps getting worse.

I’ll start by asking for any help or pointers on the reckless carve part of my story (knowing that the belts and nuts are tight) and on the limit switch issue.

Sure wish I had some people in the neighborhood who could help - I’m starting to feel like the opposite of King Midas!

Here’s what I’ve got.

I’m sure there are tips in here to be had - I really did think that I had the origin point set correctly and I don’t think the Fusion end of things is causing my homing issues. And yes, I did use the Easel post processor (unless there’s a newer version that I am unaware of.) 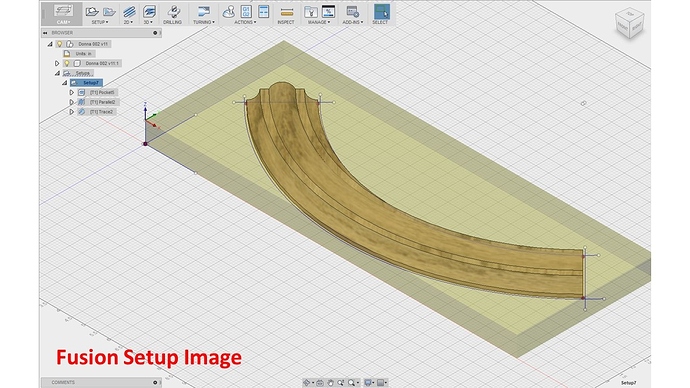 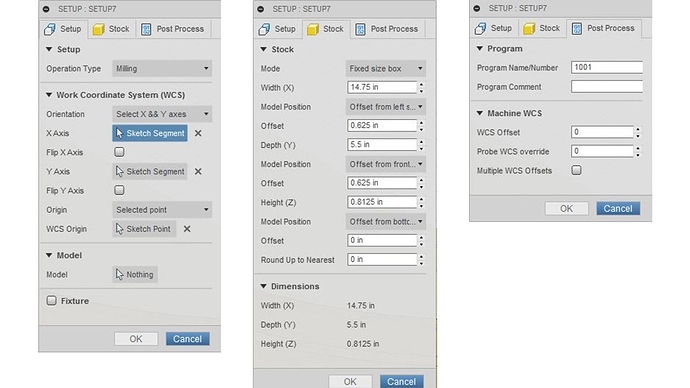 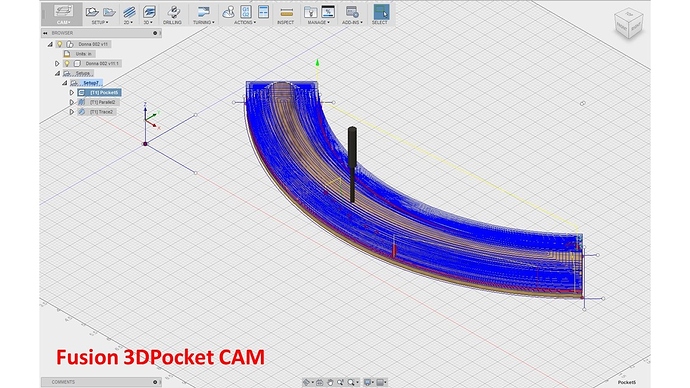 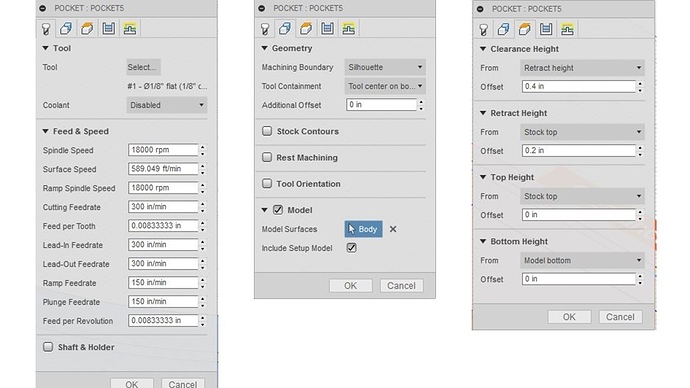 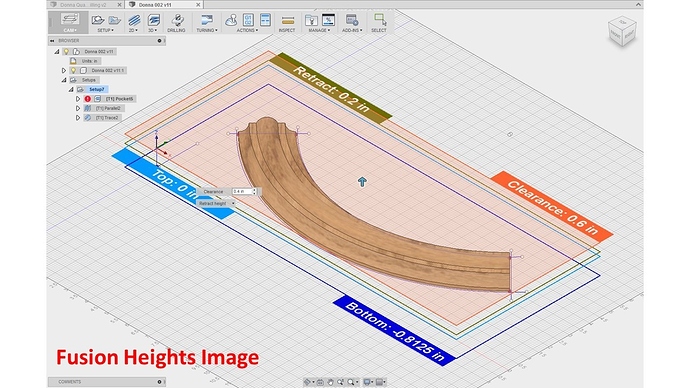 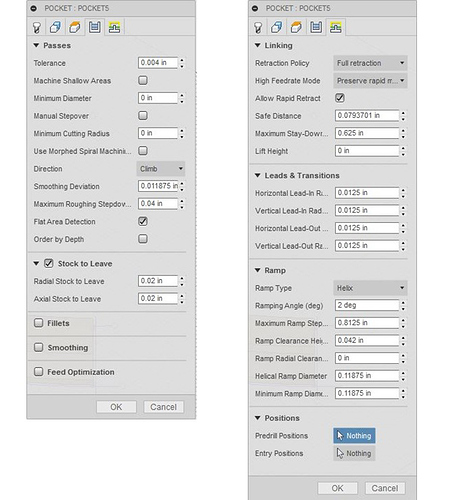 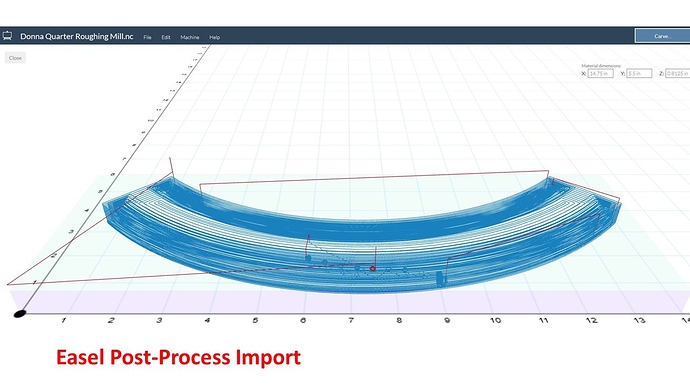 I honestly don’t know what G28 is (and understand it marginally more after reading this post: Learning About G28) so I doubt that I have turned off (or turned on) G28. I know that I didn’t do it before any of my successful carves, either.

I have not rebooted my computer (and I will feel like a dumb-a$$ if that is what it is since that’s the first thing tech support says for anything!)

I did run the simulation in fusion, and it followed the paths that you see in the image above.

I think I understand (from the above referenced post) how to turn G28 off - I can go check that and then also reboot the computer. That would be great if that’s all that my issues were, but it would also make me think that I should just quit!

It’s a 3D Pocket roughing pass (didn’t get to the finish pass) using an 1/8" end mill. The finish pass (which I didn’t post here) is set up with a ball nose.

Going in to try a reboot…I’ll let you know. Thanks, Phil.

Well, I’m 1 for 2. I have the homing issue fixed, and that was a me error. I just installed my new dust shoe and didn’t realize that it was hitting one of the end pieces of the X-carve and prohibiting the X limit switch from fully making the connection (just BARELY). I moved over the screw that serves as the touch point for that limit switch and now all is fine.

I did reboot the computer and try to rerun my carve with similar consequences: 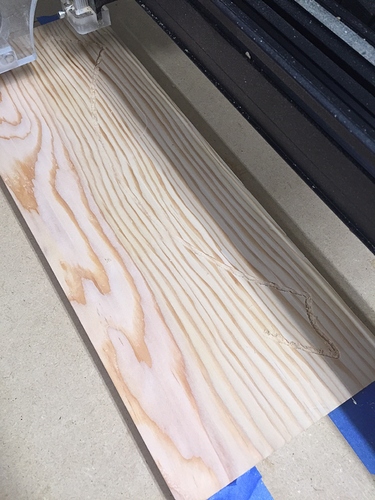 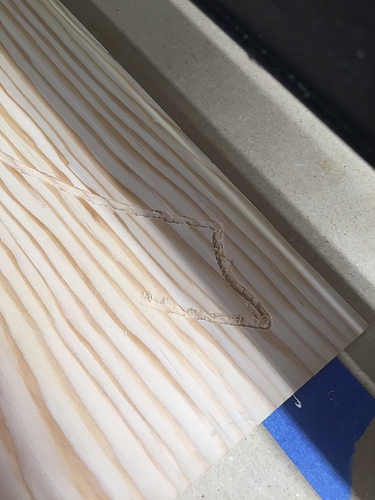 I did NOT check the G28 because I looked and looked for somewhere it could be turned off and could not find it. The post I was reading showed a large post-processor dialog box, but the dialog box I get when sending to the Easel post processor looks like this: 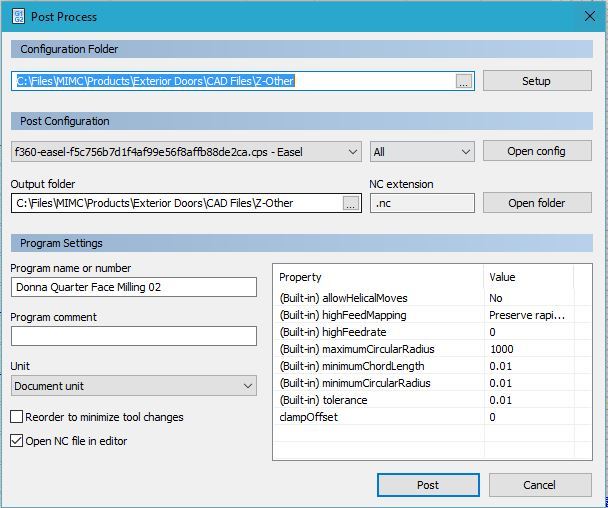 Post Process Dialog Box.JPG608×508 50.5 KB
And there’s no checkbox for G28. I suspect that I’m looking in the wrong place, but I’m not sure where the right place is. As it started the carve, everything looked okay. It went from where I set WCS home manually (left bottom corner of the material) and when I started the carve it moved the spindle to the location that it shows starting in the Fusion toolpath simulation and started out correctly, but immediately when the carve started it didn’t sound right and sure enough as it got to the second short side (as you can see above) it went wayward.

I’m going to sleep on it tonight, but I’m all ears if you have any other suggestions. I am (as you may imagine) frustrated.

Have you let the carve finish? I have had some routing passes look way off until they were finished. And when hey are done they will only slightly resemble(shape only) what your cutting. The point of a roughing pass is just to clear out material so your detail pass doesn’t have much to remove. I know this sounds to simple. But I’ve almost stopped a couple of cut during the rough because of this. Looking at your last picture. I would have let that go. Doesn’t seem to far off from what I can see.

I really think it must be mechanical, too. I’m pretty good about checking all of the nuts, etc. before starting a carve, but I might need to do a deeper dive and really examine each piece individually and give it all some TLC.

This may have nothing to do with anything, but as Phil said, the memory cache can play havoc with a cnc (especially when the bit takes a dive and a emergency stop is required) I have done way more ardiuno programming than CNC cutting…

Emergency stop (or killing the power to the cnc) is essential. The problem is that when the power is killed this way, the ardiuno controller automatically switches to power from the USB cable.

To totally reboot a cnc, and clear the cache…

Just one small comment as a reference. The option for G28 exists in the pre-installed GRBL post included in the Fusion 360 install. It is set to on by default. Once you have turned it off once your settings should be remembered next time on that computer.

The Easel specific post provided directly from Inventables does not have this option and it does not include G28 calls in the output g-code. So if you are using the Easel post you should not have to worry about G28 at all.

I think to some of the other coments, you should let it go. You can look at the simulation in Fusion and see if the tool path in the first pass takes that same turn inwards?

Other possible problem could be the current limiters on the G-Shield. I had problems where they were limiting out.

If you try an “air-pass” set Z-height above material, what result do you get?

Thanks. This is where I’m going to start. I didn’t have an issue with assembling the CNC in order to get a CNC that was affordable to me, but I would like to assemble it and then use it and not be having to take more time to dial it in. My first two carves were awesome and then they just kept going downhill. Once I get it dialed in, though, I am definitely going to Loc-Tite those nuts so that I can have a little more peace of mind. (I hadn’t done that yet…my bad.)

Going back to review the assembly instructions now to refresh my memory on adjustment info.

Thanks to everyone for your input. I’m starting with the mechanical but will also make sure I’ve cleared the cache of the CNC as well and then run an “air pass” to see how things are going before I commit to another piece of wood. I think I’ll also do the 60 minute X stiffening mod while I’m at it. I don’t feel like I’ve had much droop or torque but with a new dust boot I think it’s still worthwhile.

Any other tune-up tips anyone has?

I’m not a Fusion user, but I’ve seen squiggles like that several times due to speeds and feeds issues. Are you really trying to cut at 300in/min? What kind of spindle do you have? What kind of controller? That is a very high feed rate. If your machine can’t handle it, then the motors will struggle and the bit will veer off course.

And that right there is why I posted EVERYTHING. For some reason I though that the RPM and the feedrate were tied together in Fusion so that when I put in the correct RPM it would adjust the feed rate, but I just went into the file and realized that this is not the case. According to a chipload chart that one of the users has posted here on the forums, my feedrate should be somewhere in the mid-20’s using the Dewalt 611 (my spindle) which actually seems a little slow, honestly, but that’s just a gut check. The feed and speed chart per the manufacturer gives me the green light on such high speeds, but it is an “industrial” bit (FWIW) so it may be way too high a feedrate for the X-carve. (Which I do love, don’t get me wrong!)

My plan is still to do the stiffening mods and re-calibrate my machine and I will definitely ratchet down my feedrate number and see what happens.

I’m loving all of the suggestions, BTW.

Trouble is my middle name…

That’s okay! Everyone has added something to the conversation and it’s all been very helpful. Just got some stuff (what I could) at my local store for some stiffening mods and waiting for the rest of what I need for the mods to come from Amazon. Then I’m going to stiffen and recalibrate and THEN roll back those ipm’s! I’ll keep you posted…

Sweet. I do love having points of reference.

As for the aluminum mod - I figured what the hell, since I don’t have to bastardize the extrusions to do that one. I’ll also stiffen the Y just because I was going to put dust shields on. And since it just takes a few extra screws and nuts to stiffen Z, then why not? Maybe I’m just a glutton for punishment.

ETA - adding the dust shields merely because using my spoilboard surfacing bit with my dust shoe is a PITA.