I’m just curious if V-Bit support will be coming to Easel?

I too am interested in some Easel bit options, V-bit and ball, maybe different flutes, greater width increments.
Thanks!

While we are interested in supporting V-carving in Easel in the future, we don’t have a time frame for it at the moment.

@JasonFehr, @Victor What kinds of things do you find yourself using V-Bits for? I’ve found I mostly use it for text, mostly on signs. What about you?

Yes, that’s exactly what I want to use it for. I’ve only found two v-bit apps: V-Carve Pro, and F Engrave. V-Carve is too expensive for my budget, and everytime I’ve used F Engrave I get a weird “55 > 50” error that I can’t track down.

With the text features in Easel I thought V-Bits would be a great addition.

@JasonFehr do you find that you usually use v-bits in conjunction with another bit (like a large planing bit or a small end mill for doing a profile cut) or do you use a v-bit by itself.

Yes, initially i had thought of the v-bit for text. But recently i had an idea to cut a groove into a strip of UHMW, and getting a chamfered edge. With the ball end, you can produce some 2.5d shapes, vectors, etc.
I know this adds a big layer to the code, but it might be cool to have an ‘advanced’ menu to play with some of the bit tolerances a little more.
As for using 2+ different bit setups- that too adds complexity to the easy-to-use Easel -BUT, you could literally add a layer (another SVG file) that snaps on top of the first, that layer can have different bit settings. When the first layer is finished, it sends a popup to change bits, and so on.
Just my speculative daydreamin’ ! Thanks for listening

@Hoth I don’t have too much experience using a v-bit but that sounds like exactly what I was doing, using it mostly for carving text and a couple times for just carving a decorative edge. Made this watch box for my brother over the holidays, the sharp v shaped lines give it a very official look: 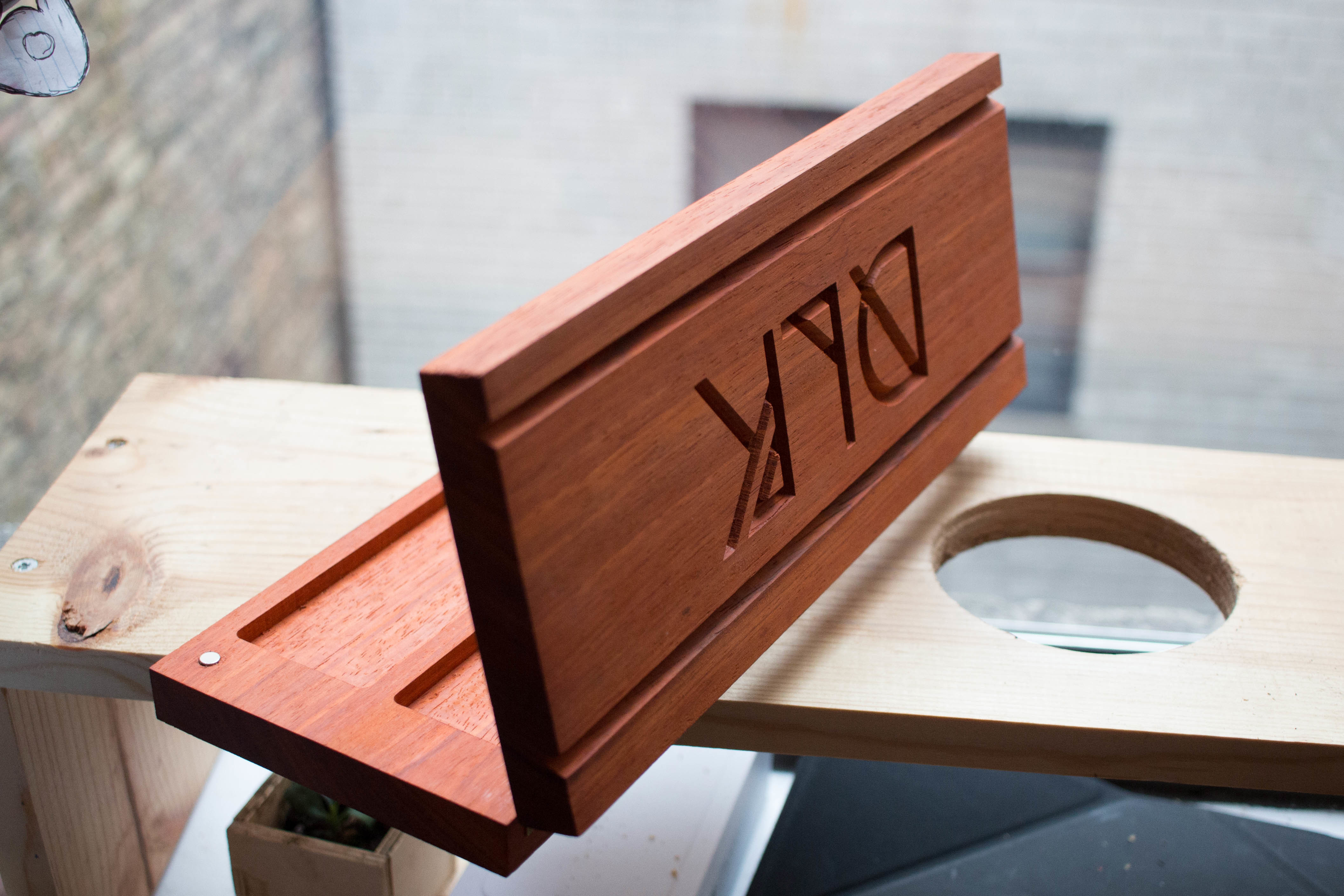 Your speculative daydreaming is very much encouraged! It’s what helps us get features built, seriously.

I find the idea of “Layers” pretty confusing most of the time because it is a very thin metaphor that tends to mean a lot of different things. For example, Easel has “Layers” but that just refers to the ordering of shapes on the canvas, which you can change to intersect shapes in different ways. Those are literal drawing layers. But then I’ve also seen more metaphorical “layers” in v-carve and other software that refer to groups of objects that get cut out in different orders or with different properties.

I haven’t used mine much. I don’t have anything to generate the g-code. I have ran it a few times as a standard but, but never know what to use as my bit width setting.

Nice Shaker design!
I have been using Inkscape and Makercam to do single line drawn text, using a bullnose bit, and v-bit. I must have missed something in Easel. Is there a way to engrave single line, simple text in Easel?
Thanks, Gary

This would be a very useful feature for me. I’d be using V bits to put a beveled edge on guitar pick guards once the route outs and overall shape has been cut with a straight bit.

I had the error problem with the F engrave to.
After some reading I have found that the program typing in it’s g code the command ‘g 91.1’ (I don’t exactly remember what this command do, but it’s refer to some axes that the standart Shapeoko doesent have).
You only need to delete this command manually and everything will work fine.

I just looked it up, because I’d never heard of F Engrave and wanted to make sure I could run it.

Found the answer at this page:

I have had some feedback from ShapeOko users indicating that there are some issues using the default F-Engrave output with GRBL.  I thought I would take some time and describe the problems that peo…

Thank you, I hadn’t noticed that page before.

Thanks, I’ll try that.

Since Easel is capable of using grayscale to control the depth of the cut, it should be possible to write some code that is capable of determining the line thickness of a line (like in a script letter) and then converting that thickness to a grayscale value so the thicker the line the darker the line would be, Then if a V Bit is being used it will cut deeper for thick lines and less deep for thin lines.

This new pre-processor would create a new grayscale vector image (SVG) of the desired image. The new SVG could be loaded into Easel to perform a V bit carving of the image.

V-Bit support would be pretty cool. and would save me from expensive additional software.

V-Bit support would be pretty cool. and would save me from expensive additional software.

F-Engrave is free software that works well for both engraving and v-grooving.

I am having a real problem getting any external gcode sender to work correctly now, either they refuse to reset the zero location, or they move the motors very slowly, or just flat out refuse to see the com port.

It would be very nice if I never needed to use UGS again.