My wife and I are working on a last minute decoration for a baby shower (we weren’t supposed to have to help, but it became apparent we needed to). I designed the sign in the file below. However, the letter where the animals overlap aren’t showing up in the tool path. I literally went ahead and bought v-carve tonight after watching videos for weeks.

What am I doing wrong?

The problem is that at the overlaps, you’ve broken up the letters so that they are not closed: 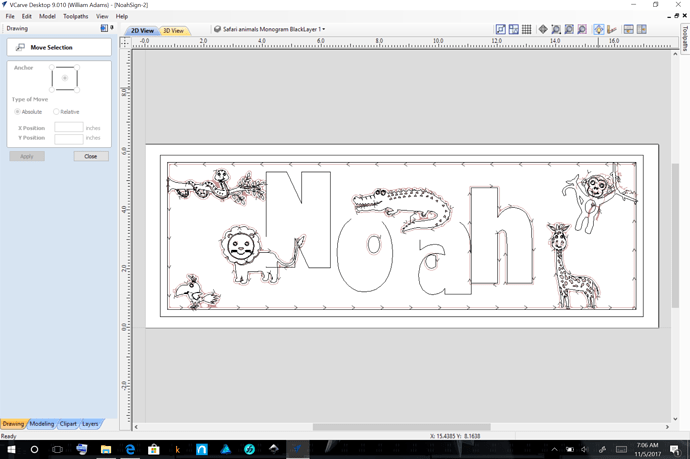 (that’s the first file, not the second which is incompleat)

You will need to close those paths with the matching portions of the animals so that they can be cut out around them.

Do you have an original graphic in some other graphics tool?

Thanks for the help guys. I obviously need to learn more so I didn’t try to make the animals overlap with the letters. Here is a pic of the final product. Not great, but for the speed, I had to get it done by I am content. 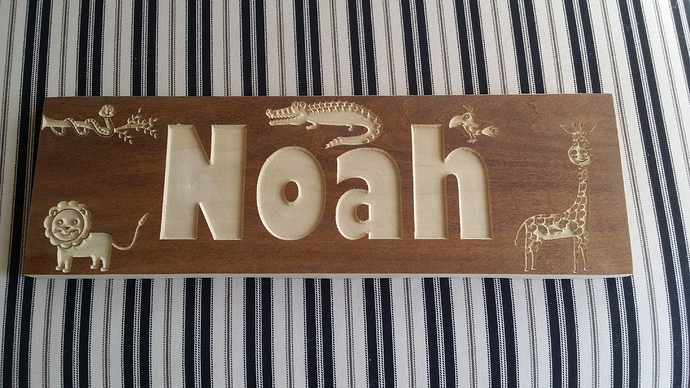 I’m no expert, but I have lately had a lot of time to explore some of the lesser known features of VCarve PRO.
Whatever you did to erase the overlapping areas caused open vectors… V carve will ignore open vectors when computing tool paths.

Again, I’m using Varve PRO, so I dont know if your version of desktop has the same features, However… I would suggest that you explore the “Weld, subtract,overlap,trim” features. I used the “Trim Objects” feature and was able to not have open vectors as a result. WARNING, this method requires a lot of “node edit” cleanup because it basically uses one vector as a reference to create another and there is a lot of overlapping vectors (which is kinda tedious), but is much easier than trying to deal with open vectors or manually welding vectors with Node Edit.

you should have seen some sort of “open Vector” warning when you computed tool paths. The copy below requires alot of cleanup, but shows how “trim objects” basically breaks down the letters into multiple closed vectors 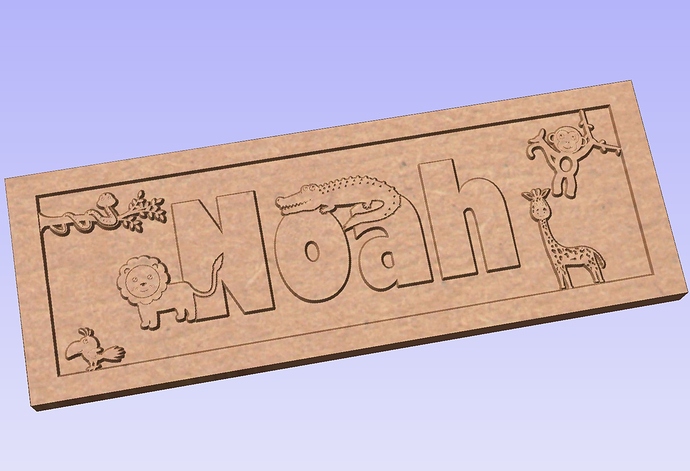 Basically what I did was close all the open vectors (the letters N O A), I then created a slight offset vector (0.05in) of the animal bodies (lion and gator) and then used the trim tool… once that was done I deleted the offset vector around the animals and calculated the new vectors. This completely eliminated the need for node editing and took about 35 minutes to do (about 30 minutes to figure out order of operations… once that was done the real steps of offset and trim…5 minutes)

OH… and I moved the monkey to eliminate overlapping vectors.

Thanks so much to both of you. What I did was use the Interactive Trim Tool (it was in one of the Vectric videos. What would you use that tool over the others you mentioned. I think I am going to make one of these for a nephew since the other one was such a hit.

Also, really thanks so much. This is such an amazing community.