Hey guys, I tried v carving last night for the first time, and I was kinda bummed with my results. I’m planning to make an outdoor sign, and before working on that I picked up some cheap edge glued pine to practice on. This board was about 5/8" thick. The bit was a 1/4" shank 60 degree bit from Inventables. For my settings I used the standard Easel settings for Soft Maple (Feed Rate:1270 Plunge Rate: 508mm/min Depth Per Pass: 1.3mm). The depth of the design I set to like 3mm.

I’m not sure if there’s an issue(s) with my machine, my project settings or what, but here are a few pictures showing some of my problems. Any advice would be greatly appreciated. 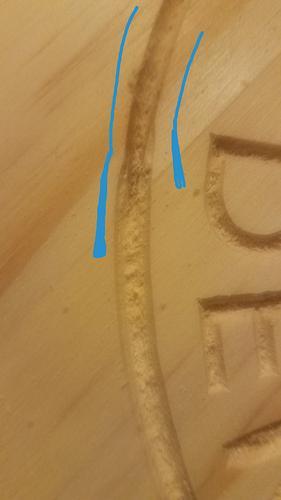 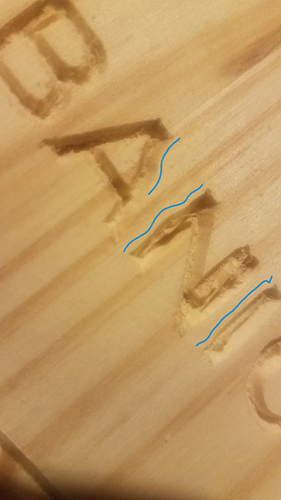 Sorry my pictures weren’t very good. I tried to draw some lines to show/exaggerate the issues. Overall, things just seem chewed up and kind of messy. The cut didn’t seem consistent. In the first picture, the arc is a circle, but at one point it goes very wide. I dunno. Any advice would be helpful.

That looks like there is some vertical slop in your machine somewhere.
Check the Z axis and all V wheels for correct adjustment.
Regarding path going wide:
If one side of the circle has a deep cut and the opposite side is shallow that indicates your wasteboard is not parallel with x and y.

Thanks for the advice, Mark. I really appreciate it. I did a quick check of my belts and v wheels. I haven’t had the time to do a good test/tuning.

I did a quick re carve, same material, same design and I noticed MUCH better results. Though, I still think there’s a lot of room for improvement. One thing that I’m kind of curious about is there appears to be resistance doing angles and curves. On the first pass, there is the slightest occasional “jitter” in the motion of the spindle. I noticed that as it goes around for a second pass these little jitters become legit shakes in the machine causing little curves (a result I think is in my second picture above). Since this was just another test, I went ahead and started thumbing through the speeds of the spindle to see if that helped. Thinking it could be related to material removal in some way? It might have helped a tiny bit, but nothing substantial.

Anyone had this kind of issue? Possible that I have a stepper motor problem(s)?

I have had the same issue! Not sure how to fix it :l

Not the best material for detailed v-carving.
Did you surface the board to ensure it is perpendicular to your router?

There’s machine issues at play here, also make sure you use the proper feed rate , check my post and profile, I v-carve nothing but soft pine it’s my bread and butter. Make sure you get a fish scale and set your belt tension. There is alot of posts in the forum about belt tension. If it’s a new machine the pulleys wouldn’t be slipping on the stepper shafts .

Thanks for the feedback! I’ll admit and apologize… I’ve been way busier than I thought before I started this thread, so I haven’t really done any legitimate problem solving here. My favorite thing about X-Carve/Inventables is the idea of community-based support in both design and knowledge of common achitecture. Hopefully we can figure something out here. I’m just a dumb designer.

Try slowing everything down, I don’t use metric setting and I don’t use easel but for my feeds and speeds V-carving in pine I use about 30 inches per minute. V-carving is tricky and requires patience if u ever v-carve mdf you will learn that it seems soft but you can wear a brand new V-bit out quickly by running to fast. It’s almost like the softer woods create more heat I v-carve on speed setting 1 , in fact I honestly don’t ever change my router settings …Is there a step over setting in easel if so increase it a little.

So to be specific this is some MasterCraft edge-glued pine from Menards that claims to be s4s after filling in knots and spots. It’s not the best, but considering that I haven’t done any v carving, I thought this material would give me a nice piece to do tests on. I broke it down into very smooth and seemingly flat 18x18" pieces to do about a 16x16" design. Everything has been sanded with 320 grit and is very smooth and even. Still a very cheap edge-glued common board, but still…

After posting, I flipped the material over and did a test at about half speed. Doing some conversions, I’m pretty close to where you’re talking about. I’ll try those values more specifically though. I still noticed the slight struggle at the top layer of the carve and significant skipping and the second pass.

Also make sure u level the waste board , I use a 1/2" piece of mdf attached to the top of my expensive inventsbles wasteboard I level it with a 3/4" flat router bit. V-carving is very sensitive to uneven surfaces the pine can also be uneven if u can plane it or sand it. But it looks like u sanded it honestly unless it’s really warped u won’t notice.

All this is bargain bin pine from Lowe’s 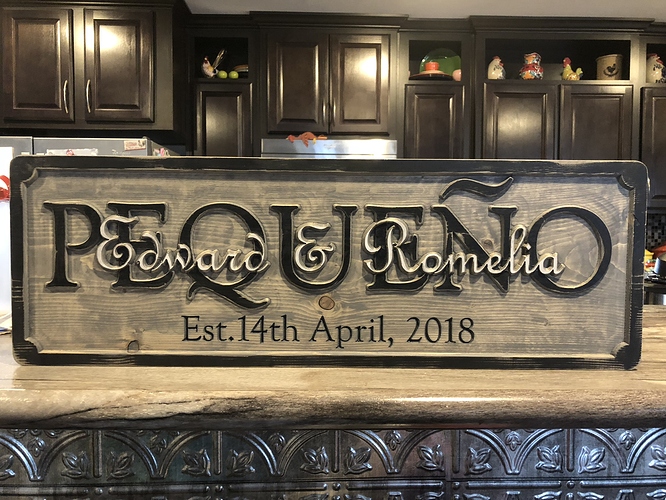 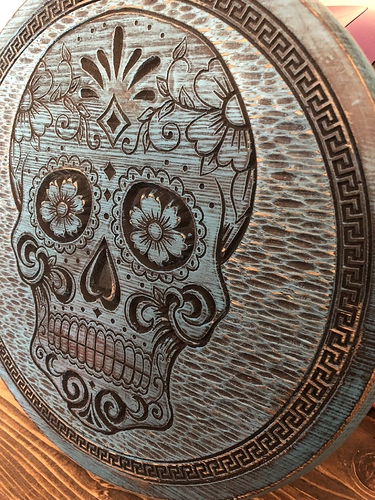 Just a little info, my machine is just over a year old. 750mm. Only thing I’ve ever really had to do was replace my spindle brushes. I obviously don’t do anything hyper-detailed, so I haven’t really noticed any performance issues. For the most part, my machine works as well as I can expect. Working primarily with hardwoods, I’ve come to expect variations in material and have been really happy with my outcomes.

The v carving seems to take things to a different level though. It seems easier to note inaccuracies and the project that got me here will be two-tone painted, so I imagine that’s gonna amplify any mistakes.

What size is your machine ?

Oops just saw your post about it being 750mm

750mm… God bless the detail in those projects. Like I said, I haven’t done any legit problem solving here on my own. Leveling things out as you mention seems like a must for those pieces. As this is jump into v carving goes, I feel like I’m mostly concerned about the jumping/skipping effect that I’m noticing. It’s giving me terrifying flashbacks of early machine crashes that I wrote off haha.

I hope it’s a setting or process error on my part, but I have a feeling that this might be something I have to throw parts at, or at least will have to do some heavy recalibration.

Also, thanks to everyone for all your responses too!

Ok so get a fish scale and a ruler , from the center of each belt pull the scale up 1 inch , it needs to be like 5 lbs tension, V-carving puts a lot of strain on belts don’t be surprised if you snap a belt soon after adjusting , if they have been slipping they may not hold up to the correct tension . I’ve replaced all mine 3 times in about 2 years, and I cut soft woods. One of your belts is slipping keep an eye on your z-axis that pulley does loosen if it is the stock one make sure it’s good and tight , when I had my stock z axis I had to run a washer under the pulley to get better alignment and tension. Make sure the set screw in that pulley and the nut on top is tight also use blue lock tite. You should have blue lock tite on every screw in this machine btw.

Once you get it dialed in you will find that you will need to re run the v-carve a second time to clean out the fuzzies and sap from soft woods. U can speed up the second carve and as long as your machine is sound it should come out sharp, I’m fixing to experiment on some plastic soon I’ll post results here soon .

In addition to checking the belt tension, check that there’s no slop in the v wheels. V carving is the only time I run my Dewalt above 1. I figure that point isn’t moving as fast. Your feed might be a little high for an X-carve.
Another thing to look at would be getting a quality bit. I have some from Inventables that were labeled as “engrooving” bits that had a barely perceptible asymmetry to them. Big difference from a Whiteside or Amana.

That seems like a very risky, yet genius thing. A lot of my issues look like they might be able to be cleared up by a second carve. I wish I hadn’t removed my last test!

I second that I use white side personally.

Thanks again, Neil. That was my thought behind adjusting the spindle speed mid-carve. I was watching and thinking that you’re expecting such a fine point to remove a certain amount of material, and that maybe a higher spindle speed would help. I love Inventables, but they’re a business. I don’t blame them for selling products they can make a profit on to keep the show going, but if it’s a function of the bit I’d be VERY disappointed. I’m going to look around on Amazon to scrounge up some other bits. This is something I’m hoping to carve out in the next week. If you guys have any sources for well-toleranced, yet affordable bits, I’d appreciate the hookup!