I’m just wondering what everyone’s thoughts are on V-Slot extrusion compared to Makerslide? I’m very intrigued be V-slot as is seems to be a solid product, but I don’t know if there is a benefit to it over Makerslide, or vise versa.

My general thought is the V-slot would have an advantage as the load transferred through the wheels are centered on the member.

I’m curious to here what everyone thinks!

HERE is a link to V-Slot, I also like the solid V-wheels you can get.

Lol straight to the point, I like it. Care to elaborate?

The V-slot place the wheels in the center of the extrusion vs. the edge. The internal construction has more points of contact. Once you use that v-slot system you can use other sizes that are not available in the MS system. i.e. 20x80 or 40x40 (vs. two MS which is like putting two wet noodles next to each other.)

I’ve been using the OB v-slot solutions on various projects over the years. It’s just better and there are more options.

Nice, this sounds like it’s echoing what I was already thinking! It’s definitely seems like a solid system.

My one issue, which maybe not be an issue at all, is it looks like the belts either have to run inside the slot, under the wheels, or through the center. Am I just over thinking this?

Yes the belt rides under the wheels. Here’s an example from my laser cutter. 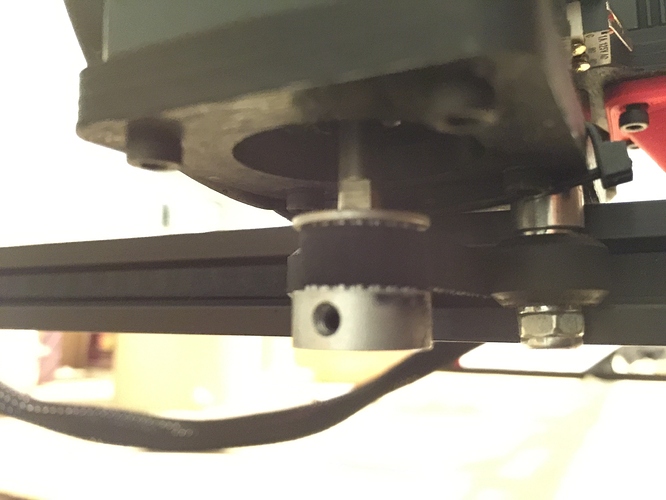 Sorry for the potato vision. But I had to lean over at a weird angle in order to take that.

Personally I feel in that configuration you get better engagement between the belt and the GT2 pulley. But you can design it differently.

I’ve looked at it a time or two, I’ve been really tempted to use their parts to re-build the X-gantry and Z axis assembly, particularly with regard to the torsional flex on the gantry and wheel assembly. What I’d really like to do is build an entirely new Z axis, that holds the router between the rails, instead of hanging it off the side.

Perhaps even anchor the belt to the X-carriage as a continuous loop, and have the motor on one of the endplates instead of adding its weight to the gantry.

Awesome, thanks for the visual! It seems like using the V-Slot like this you can remove the need for idlers! Less parts makes me happy!

Thanks for the info, could this be resolved with some dust shielding? Is it any worse than dust build up on the makerslides?

Curious if anyone has merged the two? I like the idea of running a v-slot as the z-axis. With the 250mm you’d get close to 6" of travel which potentially be a low cost upgrade for double range improvement. I’m curious the strengthening mods required to reduce deflection?

I couldn’t see there being a problem with this!

I guess the next question would be working out if fixing the sled to the x-axis carriage and having the track movable would create too much deflection so you could have greater track extension without the tail striking material.