V wheels are not rotating freely

I am just setting up my X carve and have found that some of V wheels are not moving freely after I mount them. The smooth idlers are working fine. Not all the V wheels are stiff but six of them are. I took one of the wheels apart and found that the spacer shim is thinner than the separator ? that divides the two bearings so that when they are tightened the bearings bind up. I know that some people are using thicker shim’s to space apart the bearing’s, but shouldn’t the bearings come properly spaced ? I was wondering if anybody has used the Xtreme solid wheel kit http://cdn1.bigcommerce.com/server2300/itwgldve/products/200/images/1416/DSC04042__44313.1425747379.400.310.JPG?c=2. If so do you recommend them ? Thanks for any input Millrite

I ordered one to look at it, but it was not a v-wheel. When I inquired they said they did not make xtreme v-wheels, even though they are listed on the website. Confusing and I did not pursue the issue. The wheel I received was very well made, however.

When I measured all of the wheels I received I found that about half the rib in the center was thicker than the spacer washer and that about half the center rib was not centered in the wheel rim.
Mcmaster-Carr sells spacers in several metric thicknesses that you can get to set thing right.
You will see folks that have gotten .032" fiber washers and those work when the rib is thinner than it is suppose to be. You may find some of those also on your machine.

Thanks for the reply you would think that if the v wheels are advertised they would sell them, Rick

I think that if the center rib was thinner then you could use the original shim, but the center rib is thicker keeping the bearings farther apart, that’s why you have to use a thicker washer. I call them washers because they are not even close to being a shim. I think I will purchase some .001 brass shims and space out each individual V wheel. Thanks for your response Rick

You can save your self the trouble of making shims. Here is a link to bearing shims from McMaster-Carr.

Slide down to the metric sizes.

They should. It was really well made. But, I am sure the dimensions would be different, which would require us to create new carriages… another rabbit hole. Best solution is to get QC down on these delrin wheels or wait until @DavidSohlstrom comes up with a work around.

I think the best work around is for Inventables to call out tighter tolerances for the wheels and hold there suppliers to those tolerances.

The drawing I looked at had the center rib a 1mm thick with a tolerance of +0.0 -0.08mm. There supplier is not holding that tolerance.

The drawing gives no tolerance at all for the angle of the V. When I measured the V angle on the wheels I received I found none to be at an angle of 90 degrees. All were less than 90.

Oh I wasn’t going to make the shim’s Dave we have a supplier here in Canada that will supply me the shim’s. I have contacted the help desk and they are sending out more V wheels to me. I guess I will pick through those and select the best ones. I wonder if these V wheels not being accurate is why so many people are having problem with alignment and messed up carving. I think you have to start with a stable base and build from there in order to achieve a reliable machine. Rick

Here are some shots of the setup I used to measure the wheels I received.

Hello Dave I made some measurements on the washer/shim. I have used a playing card as a shim, since playing cards are generally precise thickness of .010 I made my own hole punch out of a piece of 5/16 ss tubing and sharpened the end. Works pretty good for stamping out shim’s. 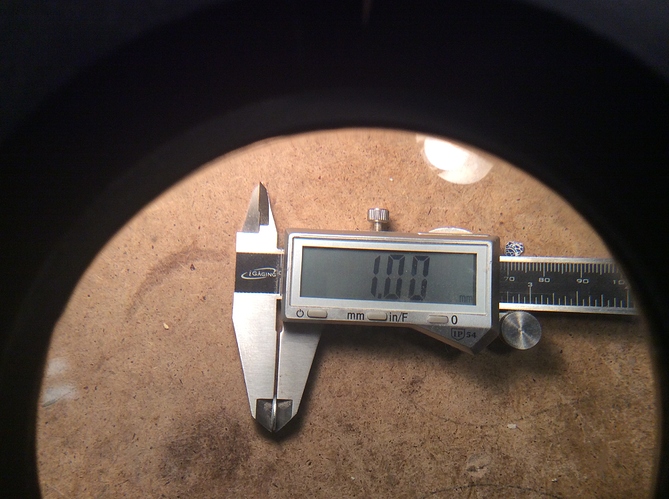 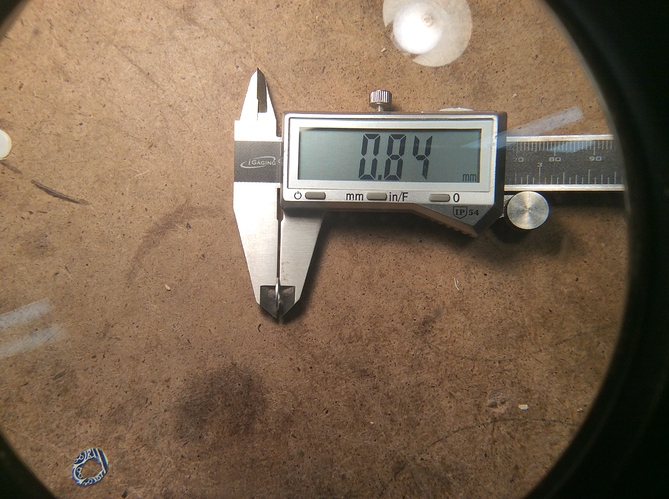 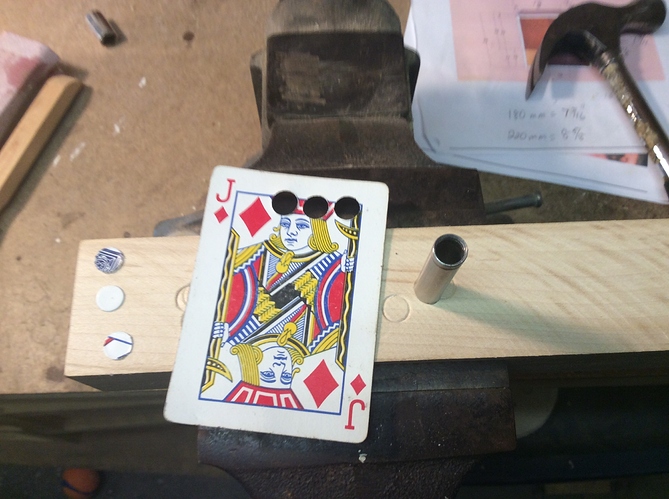 By now you have assembled with the washer and shim. How did it come out was the wheel free turning rather than stiff like before.

Yes wheel rotates smoothly, my concern now is are the delrin wheels centred on the bearings. If one of the bearings is off the centred internal ring will it ride correctly on the v rail. I suppose if all the wheels are shimmed up the same way and you install them all in the same direction should work ok. Rick

Rick
Do 2 more tests.
1 With a wheel mounted up but not riding on a V rail see if your can move the wheel rim on the bearings to see if the center shim is now too thick and let the bearings slide in the bores of the rim.
If you get very little or no sliding good. If the movement is more than say .003" then think about adjusting the spacer thickness.

2 Lay a wheel on a piece of plate glass and use feeler gauges to check how far the bearing sticks out of the wheel rim. Then flip the wheel over and see if the distance is the same. This will tell you if the wheel is centered on the bearings.

I will tell you that the wheels I received not all of the ribs in the center of the wheel rim were in fact centered.

Ok but will have to wait until tomorrow, getting late and have to work in the morning. ps like the accuracy you use in measuring the v wheel did you machine that fixture that you used to set up the wheel? Rick

Yes I have a fairly complete machine shop here at the house. Being retired helps also.

PS you must be in Eastern Canada. Only 5:30 here in the west.

Yes south western Ontario, we have an event called daylight savings time, were we go back an hour on the clocks. For some reason it messes me up with my sleep. Just another thought on the X carve. Before I purchased this machine I watched many endorsment from youtube, people who where given the machine to evaluate. I don’t remember any mention of stiff v wheels and the majority of revues where quite positive. I wonder since the popularity of the machines now and the number of them being sold has caused the quality level to drop. Rick

My brother worked for a company that got parts from China. He said that pre production parts were good but the further they got into production the looser the quality control became.
It would not surprise me if this was the case with the pre production machines that Inventables passed out to the people that made the reviews.

Every one reading this thread and thinking about getting a CNC router have to keep in mind that the X-Carve is a low cost entry level machine. It is not plug and play. There are several areas of the assemble of the machine that require the owner to make adjustment so the machine will operate to the best of the machines ability.

If a person thinking about a CNC router in the shop or business that needs to run 8+ hours a day and make high quality parts from day one, they may want to look at machines designed and built to do just that. They just will not be low cost machines.

Hello Dave I am going to go with the xtreme v wheels from SNB Solutions. I really don’t want to take a chance on the standard v wheel from xcarve. I will let you know how they measure up to the standard wheel. Rick

Rick - is there a link on the worldwide web?