I’ve bought a Shapeoko a couple of years ago and bought an upgrade kit a little over a year ago. I finally found the time to assemble it, but I am not sure how tight the V-wheels should be. On the Shapeoko almost no force was needed to move both axis. On the X-Carve, however, the X carriage seems too hard to move. At first it felt slightly bumpy so moved the carriage back and forth a couple of times. The “bumpiness” is almost gone now and I am sure it will get better by itself.

I tightened the excentric nuts just enough so I cant stop the wheels moving with my fingers when the axis is moved. Its not super hard to move (still possible with one finger), but definitely not free moving. Might it just feel harder by having a two Makerslides on the X axis (in contrast to my old Shapeoko)? If not, what could I’ve done wrong?

I’m assembling my new XC and ran into the exact same issue. Nowhere in the assembly instructions does it say how tight to fasten the wheels; other than not so tight as to cause it to bind.

My wheels appear to have some ‘stuff’ flaking off leaving a bunch of residue on the rails. It looks like it’s gumming up the rails and causing the ‘bumpiness’ you describe.

Not sure what to do about that.

It’s not dust on mine, I haven’t evened building it yet. I’ve just been moving the gantry and carriage back and forth to check the force, etc.

I’m having the same problem. All axis are hard to push, certainly don’t roll freely. Is this normal with xcarve? Are the wheels still too tight? Could the belts be too tight? Need a little help…Dennis

Thanks Phil. I’ll go back and re-check all the wheels. I was just a little worried that I might experience some binding and damage the motors if the axis were too tight. Dennis

I’m going crazy, I changed every screws on the Y plates, but at the end of a long project, one or two screws in the y rails results too tight, i wasting time and material (money)

Sorry Robert, what I mean, is that the wheels do not stay tight and loosen up and others tighten too much. During a project, so that steps are always lost and it is somewhat difficult to control, since they do it within 2 or 3 hours within the same work of the router. I have tried many things, using threaded locker too (not blue loctite is not available in my country), now I will use a trick I saw in this forum entry, which is to put a screw through the eccentric thread. As I said this drives me crazy, since I start adjusting and verifying that everything is in order before you start and you would think that this is going to be maintained during a single project, but I have never been able to. The potentiometers are well calibrated and the straps too. Thanks for your attention. 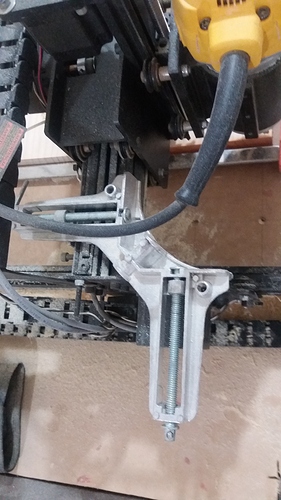 20170531_091326.jpg2322×4128 2.58 MB
Mr, Phil, I tried to fix that also, the hinge or shear effect, since between the X and Y axes their perpendicularity is not maintained, I even put a right-angle press at both ends to rigidize the assembly. But I think I should make some thicker plates for the Y rails And, I attached a photo, thank you for your attention.