Anyone know how to modify tool paths in vcarve. I’m having issues with my vbit travelling outside the path on the initial plunge. I know this is due to the flex in the z and x axis. Ive done the x axis mod of filling the space, but I still have flex. I was hoping to tell vcarve to start in the center of the cut, not on an edge. Any ideas?

If you are V-Carving, you can reduce the depth of cut so the cut is not as aggressive.

After selecting your bit, hit the edit button for the bit…change the depth of cut. 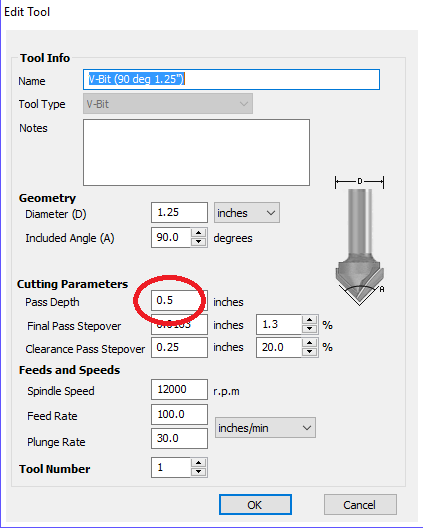 I’ve already reduced it to 0.1 in. I’ll try hundredths next time. Any idea if decreasing the plunge rate will have much of effect?

If you are having flexing issues, that is generally because the cut is too aggressive. Reducing the depth should fix it…When I did some V-carve on aluminum I reduced the depth quite a bit. The harder the material the shallower the depth.