Had a question regarding stars. I have seen a few videos of stars being cut with a v bit. When I do them, they have a flat bottom. How do I get them to carve from center out on easel pro? I’ve tried setting it to the center point but still cuts flat bottoms.

I apologise, I’m new and only have a few carves under my belt.

Thank you in advance!

If you set your depth of cut at approximately .2" , then look at the preview, you should see what the bottom of the star will look like. If you need to go deeper just make the change. The vbit will continue to go as deep as necessary to get to the point unless you set a shallow depth. Please consider how thick your material is also. You do not want to cut all the way through. You can look at some of my videos here on the forum to get an idea. Hopefully this will help you get started.

@Zhanglei. I use a 90 degree bit to carve the stars

Thank you so much. I recently gave it a try and it worked!

Hi Phillip,
How does this work if you’re doing an vcarve inlay?

For example, if im doing a star inlay, and i set my pocket depth to .2". When doing the male inlay, how do i get it match the pocket … My male part is ending up flat on top, instead of matching the pointy portion of the pocket. I know if has something to do with setting the male inlay start depth lower, but then that makes the overall carve depth lower.

Am i missing a feature in Easel pro that allows me to start the depth at a certain level, yet stop at the lowest depth setting…(in the example above, that would mean .2") I know other programs have this feature, but i dont know if it exists in easel pro…or i’m just not seeing it.

any help would be greatly appreciated. You do outstanding work.

Start depth is just your Z-zero. For the male part of a V-inlay, just set your Z-zero depth lower. If you set it 2mm below your material’s surface, the inlay will be inlaid 3mm (it will drop in to your pocket 3mm).
If you cut greater than 3mm (you should), you will have a gap between the workpieces when you put the inlay in. If you’re using a bandsaw or something, leave room for your blade to remove the leftover. If you’re facing the extra off, leave a smaller gap.

that’s essentially handicapping yourself. Why do you bother with a v-carve to do an inlay? the beauty of the v-carved stars is to see the cool v-carve look. If you’re going to inlay (I am assuming a non-transparent material) the v-carving is invisible. What you can do is cut the v-carve (which does give you the pointiest stars vs even a tiny 1/32" tool) and then mill a standard pocket at say 1/8" deep as a shelf to lay your inlay on.

Why do you bother with a v-carve to do an inlay?

@HenryFeldman, it’s a really common technique to gain detail in inlays. Just like you use a v-bit to gain detail and sharp corners, you can do the same with an inlay.

This one was done in Easel, as a proof of concept. I typically use Fusion 360.
Black Walnut in Maple. 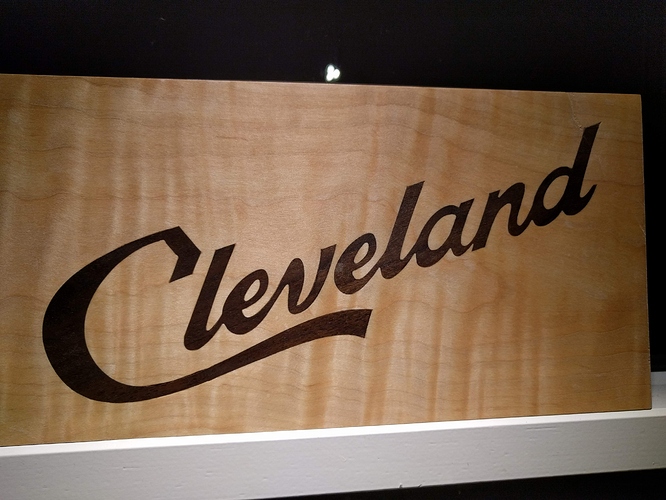 do you chamfer the reverse side? How would match the variable angle of the hole sides?

How would match the variable angle of the hole sides?

Use the same bit.

This was done in Fusion for toolpath control, but the idea is the same. 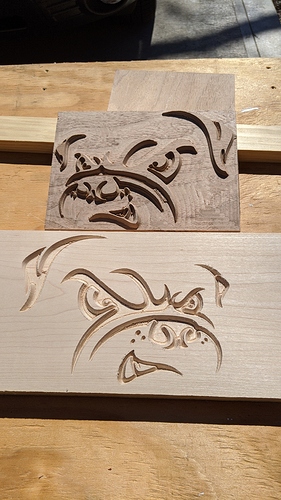 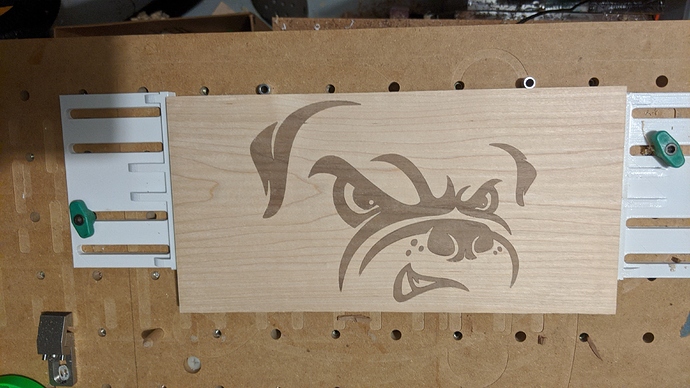 I have done plenty of chamfered inset pieces in machining on my tormach, using a chamfer bit, and that’s no problem since the chamfer (or fillet) is put there by me in CAD so the depth is constant (or at least known), but for cutting an inlay piece since the part is inverted does it make the same calculation for the cut in reverse since the depth is continuously variable? (I mean I guess it must, since it worked for you)

It’s essentially cutting a 2D path with with an angled cutter. Picture a 2D drawing and a mirror image of the same on two pieces of paper. When you flip one on the other, the lines match up.
By manipulating the start depth of the male piece, you’re adjusting the depth at which the cut actually matches the original profile. If you don’t drop that start depth, the profiles would meet at the surface of both workpieces (like the paper). Setting the depth below the surface essentially ignores the stock above that point. That allows you to mate the pieces together, with control over the max depth of the insert.
It makes sense in my head, but I don’t know if, without a visual, my explanation here makes sense.

HI Neil…this is exactly what i’m referring to, but in easel, if i had a pocket depth of .2" and then i manipulate the male inlay to start “below” the work piece, (lets say i drop it .1" below surface) then i’ll end up with a total depth of .3" … because easel is still telling it to carve .2" down…its just assuming that i’m staring at the 0 position on the z axis.

On other programs (vectric, etc) it lets you set a starting depth but still stops at the total depth you initially put. In this case, .2".

thats the part i’m trying to get around in Easel Pro. I do love the simplicity of Easel and dont want to struggle learning something else right now.

Just set the overall cut depth to be 0.1" if you want to start at -0.1" and cut to -0.2". It’s not built in, but there’s no more than that to it. V-Carve doesn’t do anything fancier than that.
Make sure your machine can handle the extra 0.1" on it’s first pass. The reason I learned to do V-carved inlays in Fusion is because the Carvey we have at the school is not up to that extra depth of cut. V-Carve and Easel don’t take into account that there is actually stock in that first 0.1". I can get Fusion to work it’s way down though. I can’t remember if F-engrave does…I’ll have to try it out again.

I read your response and just said to myself, “how can i not have thought of that???” … such a simple solution (regarding the depth) and i was way over thinking it.

I currently have the 3018 Sainsmart and that spindle can’t handle the extra .1" at the start, but i’m waiting on my millright carve king to arrive, and i have to imagine the dewalt 611 can handle it. If not, i’m going to have to go back to the drawing board.

thanks for your insight…its greatly appreciated.

I’m having a similar issue where the male part seems too big for the female on the carves I’ve tried so far.

Is no manipulation of the male x & y sizes required to say reduce by 0.002" for a fit? I think I saw a Inventables video tutorial that said the inlay generator does that, but due to the complexity of what I am attempting, I’d rather do it manually than use the app.