I’m still waiting on Vectric to approve my ID on their Forum so this is the only place I have for now… I’m noticing that when I use Vcarve, the initial cut is pretty deep… 1/8 to 3/16" deep and after that point, it seems to step down in shallow increments. Which setting controls that? This is about the only thing left I’m having problems with.

Not that familiar with Vcarve yet, but check this setting. Do you have something there? Is it about the depth you are seeing on the first pass? 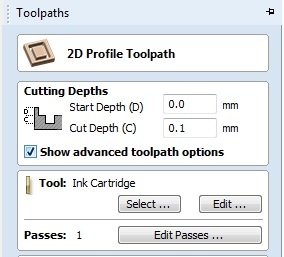 My start Depth (D) has always been 0 and I set my cut depth C to final desired depth. I’m wondering if it’s something in the tool config?

Tool configuration does have that type of information built in.

What is your cut depth set to ©?

If you edit passes you can adjust each pass.

I’ll check that out. That’s done after you calculate, right?

i think (and i could be wrong) tha depth will be relative to the line width initially but i believe there is a setting related to this. perhaps @PhilJohnson will chime in and offer some insight.

I set my cut depth C to final desired depth

What is your cut depth set to ©?

The picture wasn’t mine, it was there to show the cut options provided. There are 2 entries: Start Depth (D): which I leave at 0 and Cut Depth ©: which I put in my desired ending depth. I don’t have a problem with Cut Depth, but it’s the initial cut that kills me. My thought is if you leave Start Depth to 0, it would take a little off the top like Easel does, but it almost always sinks in a little too deep for the first cut, but all subsequent cut increments are fine. I’m wondering if by leaving it at 0, it uses a default? Perhaps I should give it something like .06" for the start depth if that would change things?

In the picture above…after you have chosen your cutting tool…

To edit the parameters for that particular job, press the edit button and change the pass depth parameter.

So, you are saying to edit the tool rather than the toolpath (yes, I know it ultimately ends up in the toolpath at the very end)? I’ve tried that to a degree, but could probably do a little more in that area as I wasn’t entirely sure that was where I should be doing it at.

I wished there was more control in the material itself. If I were carving foam, I wouldn’t mind the big initial plunge whereas in oak, that would be somewhat of a Banzai charge. If my memory serves me correctly, I was seeing a cutting rate of 100 in/min as default and I wouldn’t wish that rate on my worst tool enemy when working with a hardwood. I’m having to drop those back to 15-20"/min to not strain the equipment. Quite a big difference from 80-100 in/min default in most of the tools.

Yes, you need to set C to your to the desired depth of the tip of the tool. edit the tool itself for the pass cutting depth of each pass. Select your tool then use edit the tool, this way it is only set (feeds,speeds,depth) for that job and not for all jobs.

One thing I do is setup the same tool for different materials. I go into the tool database and copy a tool, for instance a 1/8" endmill.

I rename the copy to: 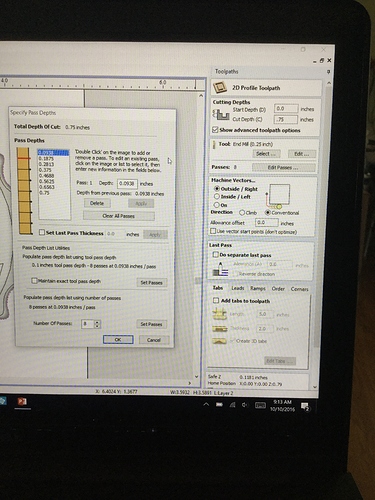 There’s also a flat depth setting when you choose a VCarve tool path. The picture above is the settings tab for a profiles toolpath.

That’s a real good idea since different materials will have diff feed rates.