I cant get the dune buggy to carve, vcarve tells me that the 3/4" wood is not thick enough. I want to use a 20 degree bit. any help would be greatPercin.crv (8.1 MB)

I ran into this problem yesterday, and a Bing search on the error brought up a good explanation of the problem, although I can’t seem to find it again so let me see if I can put it in words that’ll make sense …

The V bit is trying to calculate carving of the vectors between the widest points, so the window and bottom of the car for example. It treats it like it would any letter, so it’s trying to calculate an angled cut down from once side and back up to the other. Because of the side of the space, the angled cut would be many inches deep in order to make a V…

Try checking the Flat Depth option (top right, cutting depths in toolpath window) and you should be able to get past that error, however pay close attention to the preview, since you’re now using the V bit to create a pocket with angled edges.

Yes, Darryl is correct. But you can use a different bit for roughing out that carve. Like a 1/8" end mill. But you would have to be experienced enough to maintain positioning during a bit change. You do not have to v-carve this. You can use your v-bit to simply trace that vector at a specified depth by choosing a profile toolpath and selecting the “ON” option instead of inside our outside. Looks like a dept of .05 would be good for starters.

If you’re using VCarve to “V Carve” (using a V Bit),’ sometimes, VCarve finds two points that are some distance apart and tries to plan a single V shaped cut between those points.

For example, if you tried to V cut a 2"x2" square, it would try to make the cut sufficiently deep that all four sides would be cut downwards at 45 degrees until they met a single point (like an inverted pyramid.

Sometimes, the solution is to put the object into a shape such as a square or circle. This way, instead of cutting everything inside your original object, all it’s now trying to do is cut between your object and this ‘outer’ shape.

The other way, is to select the outside line of your object (or inside, depending on the object or the shape) and to duplicate that with an ‘offset’, for example with an offset of 2mm. I’m my example above of the 2" square, instead of trying to make a V cute between the lines that are 2" apart, it’ll only be trying to make a cute between the original line and the line that is 2mm away.

Not sure if this makes sense or not, if not, let me know and I’ll try to make it a little clearer.

All great ideas guys, thanks for the help. I used Earwigger’s idea and did a profile ON and it came out nice. 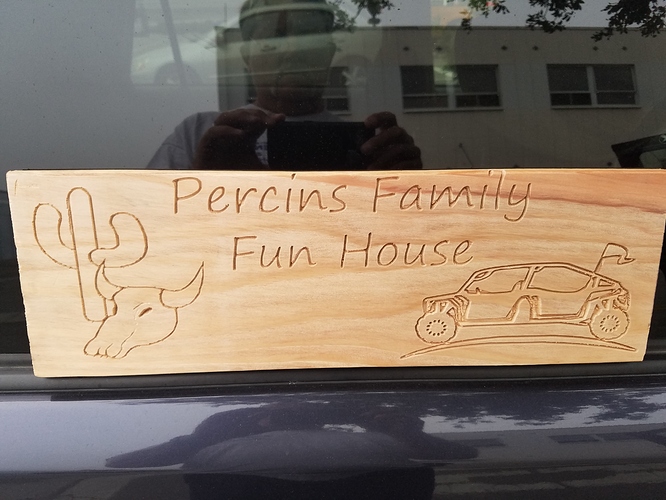