Alain, the assembly instructions can be found here (For the 1000mm machine) http://x-carve-instructions.inventables.com/1000mm/

Thanks, I will print the document.

I ordered mine in October, I’m still awaiting a few things that are backordered (I think clamps are the only items so I’ve been able to make progress). They sent wooden ones that worked OK, but the washer cuts into them and they lose their grip… Started using double-sided tape and WOW that holds!

I had the same thing. It’s frustrating but we can at least get started building it.

I ordered mine back on the 23rd of October, I’m missing a bunch of parts, but the most important part missing is part of the power supply of the x-controller, so I have a mostly assembled machine but not what I need to get started. Yes I’ve read the forums and looked at projects and even designed a bunch of things to carve.

I should get a package within the next week with what I need to get started, but my clamps are missing in action, with no idea when I’ll get them, I have wooden jobbies for now. I didn’t get any dates re when things would ship, living on the other side of the planet it seems to take a couple of weeks between shipping and arrival.

I emailed the support guys about my missing parts, it took a couple of working days to get a response. So if my experience is anything to go by you could be in for a bit of a wait still.

Hello Ron, I like your suggestion… I hope to get my X-carve 1000 before Xmast 2016, as you stated indeed I am watching video and read whatever I can get my eyes on about the mounting of the X-carve. There are so many video and comments and improvement on the X-carve over the past months and years, my concern is upon getting my X-Carve, is Inventables will provide the LATEST mounting instructions which includes all the features, video, drawings, technical description etc. etc.

I too was caught in the middle of “instruction” chaos. I bought the “2015” XCarve with the upgraded package. I had to flip back and forth for some of the instructions. Looking back, it’s not as scary as it was when I first opened it…

My advice… take the time needed building it. Expect to have to take things apart and redo. Expect to write for help with the Inventables Customer Service. However, the more you read on the forum, the more things you’ll be able to anticipate and not worry about…

I just respond via an email to your comment. Thanks for your support. Indeed time and patient I will get there… I am learning a lot by ready comments in the Forum…

I took a little over a week to assemble mine. Spread out over most of the living room (had to be near the tv of course), wife was less than thrilled.

Jim, thats exactly what i am doing but the wife is OK with it HELL she’s a flight attendant so never home

I ordered 11/26, the order page indicated shipping within 3 weeks, was hoping it arrive before christmas but looking at this post, it seems that’s not possible…

When can I have an expected shipping date? 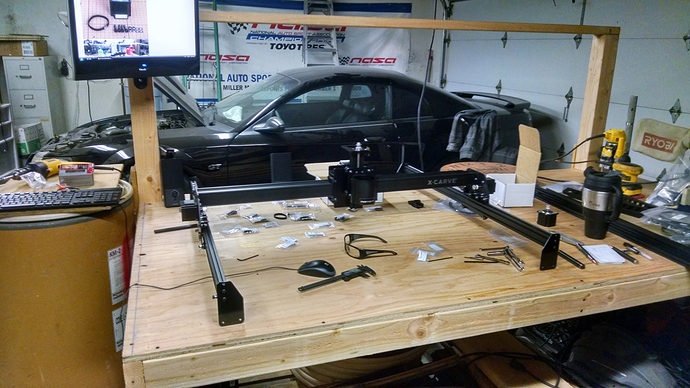 You’re doing the right thing. Put whatever together wherever. Even after assembly, it took a ton of time to figure out what was going on. I’m an Apple person, purchased a dedicated PC for the x-carve. I spent a month trying to get the PC to communicate. Then purchased a Mac, and in 15 minutes, carving. As always, it was about money of course. But I’m in it to learn, and the process is educational. Phil

You are not alone!

It states right in the web page. Orders placed today are expected to ship in 6 to 8 weeks.

Yes, FULL orders are. I only ordered an X-Controller as a spare part/separarate tem. Not an entire kit. The clamps I ordered a week before arrived in 3-4 days.

The xcontroller all alone by itself states the same thing. Right on the top of the page. Very first thing you see.

Spending my time working on designs for new projects and exploring the free projects available from Vectric for VCarve Pro users.

I agree, that is what the page says NOW after it has been on Back Order since mid Nov. NOT what it said in early Nov.

But it’s not worth arguing about.

Oh man. Your totally screwed then. I ordered mine May 22. It said expected to ship June 1st. It didn’t come in until late October. They defiantly made up for it tho.