Warning Pop up in Easel Pro

How do I get the annoying Warning Pop up to stop each time I start a project in Easel Pro?

Sorry, to say this… I think that is a Bob’s CNC thing and not an Easel thing.

Where does it pop up?

Started poping up on mine and i don’t have Bob’s cnc just in easel. Must be something Inventables has added. When you figure out how to get rid of it let me know.

When you go into Easel and click Machine, is it set to 3rd Party instead of X-Carve, Shapaoko 1 or 2 or Carvey?

Mine is set to xcarve.

It pops up on the main Easel screen. I’ve been using Easel for almost a year and it has just started within a week for me.

Mine is set to Bobs CNC.

This is something new it must be something Inventables just added. I get the message with my xcarve also.

It is a new Easel popup.

We get it on both of our machines. quite honestly I would not leave an x-carve unattended but I leave our cnc4newbies unattended all the time.

We have requested it be removed, it is just another unneeded popup. Maybe others could request the removal as well if you think it is not required…

Yeh this is a new Easel pop up that just included for every machine.

It seems to have caused a huge amount of confusion. I noticed a Facebook post where the person thought he had done something wrong and several others thought it was specific to the persons machine.

Could there at least be a way to turn it off for those of us that don’t want to see it?

I have it also. It just started in the last week or so and I’m using a Mill Right machine. Quite annoying. My first thought was a bit paranoid… I thought someone was watching me though the computer camera as I walked off into the next room. Then I remembered that my camera is covered. I don’t like it any way.

Maybe it has to do with liability? I just close it and keep going

@PhillipLunsford Maybe but it could be added to EUA.

At very least they could add don’t show again checkbox as it appears not many are thrilled with the addition of this.

Maybe someone from Inventables could weigh in on this.

At very least they could add don’t show again checkbox

Yes Inventables, that pop up box is annoying

I’d view this as something like the sticker on the side of a lawnmower that says ‘don’t stick your fingers in here’. I’m sure Inventables was pushed to add this after someone left their project running, the bit sparked off a screw and started a fire. Of course, it couldn’t have been the id10t who did this, but it has to be the fault of the manufacturer. Hence, the liability clause to warn users. The actions of one affects the rest of us in a case like this. 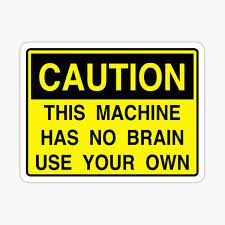 For me, I just leave it up there (weather I walk away or not). When the carve gets done, it goes away on it’s own.

Mine just started popping up as well. I log in and everything the same way I have for over a year.

but but but, to add to this… staying within sight of the x-carve and within reach of the emergency stop kinda defeats the purpose. I may be taking this too literally, but the whole reason I have an x-carve is so that I can focus on other things. If I need to be right by the machine, I’ll get a scroll saw and cut the pieces out myself. It’d be nice to get a general idea of why this warning is now occurring - is it, as someone mentioned, the danger of the bit hitting a screw? Have there been known cases where the project stops running mid-carve with the bit sitting in the wood spinning, and causing a fire? Why is this new warning occurring and what should we be on the lookout for?

FYI this is now some text on the final carve menu and will pop up the initial time you do a carve but won’t show up every time afterwards like it was before.