First off, this is for the 500mm machine.

I noticed after having my machine for a few months that the wasteboard was bowed up in the middle. I was planning on upgrading to the DeWalt 611 router anyway, so it was as good a time as any to stiffen and flatten the wasteboard.

I ordered a bunch of parts from Inventables, here’s a list of what I ended up using:

Total cost: about $55 plus shipping.

Here is what I did:

•Cut the extrusions down to 18.125-"
(I used a regular blade in my miter saw. It worked fine, but if you do this, be sure to wear sleeves and eye protection. Aluminum chips hurt when they go flying.)

•Next take out the 8 button head screws that hold the Y axis to the wasteboard rails, and slide the wasteboard out, being careful not to lose the T slot nuts that are in there.

•Flip the wasteboard over, set the 3 pieces of extrusion in between the two rails, making sure they are square to the rails, and flush to the edges of the wasteboard or centered, respectively. Trace them with a pencil and then remove them.

•Next, mark and drill pilot holes, 3 per rail. Then flip the wasteboard over, and using a 3/8" forstner bit drill pockets into the top of the wasteboard deep enough for the heads of the cap screws to sit into. The shoulder of the forstner bit is a perfect depth guide for this. Then drill clearance holes all the way through the wasteboard for the 10mm screws.

•Flip the wasteboard back over, and take off one rail. Again being careful not to lose the T slot nuts.
•Next, put bolts into the new holes, and thread a T nut onto each just a turn or two. You want the rails to slide onto them easily and be loose.

•Then slide the 3 rails onto the T nuts.

•Next, put 2 T nuts into the left rail inside, one in each side of the center rail, and 2 in the right rail inside. These are for the angle brackets.

•Now re-attach the other horizontal rail that you took off.
•Measure how far the other rail sticks out from the wasteboard. Duplicate this measurement on the one you’re attaching.

•Slide 3 T nuts into the inside track of each horizontal rail.

•Screw in the angle brackets. They have offsets that align with the rails to keep them square and flush. Make sure you keep everything square as you go around tightening the bolts on the brackets.

I added rubber feet on the corner brackets because I found the center ones sat a bit proud causing the machine to rock left and right when I put everything back together. 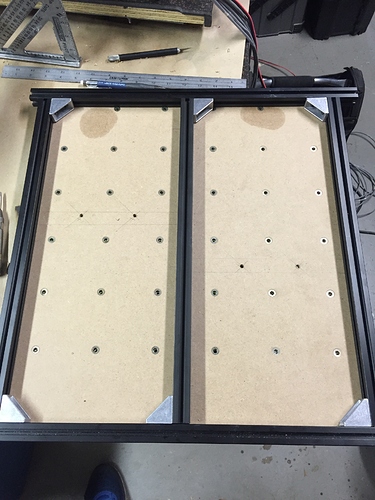 p.s. I initially planned on doing horizontal stringers too, which is why you can see some extra holes and marks in the wasteboard. However, I didn’t order enough T nuts, and I lost a few when I took the wasteboard out from the Y axis. However, it would have been overkill in hindsight. The platform is very sturdy, true and flat now. I’m quite pleased. I can put a 15lb weight in the center and it doesn’t bow more than 1mm.

Hey Mike, nice work. I used a very similar mod for my torsion box for my machine. If you add another layer of MDF to the bottom side, it will give you additional stiffeness. In your situation a few stringers connecting perpendicular, will make yours like a torsion box if you add the bottom as well.

This should give you even greater rigidity on your machine, enough weight to hold it in place and overall better cut.

I used the technique for my setup that is 1800mm X 1000mm. An added cost, but I plan on repurposing the extrusions later after I use my machine to make the components to build a new full fledge torsion box for my machine to sit on.

I did this mod last weekend…what a difference it made in wasteboard stiffness! Great work Mike!