Well I got an old PC for free. (Old as in floppy Disk Old) Although it does also have the DVD Drive. Anyways I finally got it all booted up fresh copy of windows and reformatted and cleaned. Pop open easel and find out I’m having a WebGL issue. Searched the internet and on the forum and tried all the settings on google chrome and still nothing. I am going to assume that the issue is with the computer itself and the lack of a graphics card/integrated one not being fast enough. It has a 1.6ghz processor and windows 7, so I thought it would be enough. I’m just wondering, is it also normal to not be able to see the 2d side (left side) either? I can live without the 3d preview but not even seeing the 2d really bites. Also I guess my next question is, what can I get away with that will run easel? I’m thinking my only option right now is to find another pc.

Check to see what type of video you have (i.e. Intel, radon, Nvidia etc.) and then check to see if there is a newer driver that will enable 3D. I have found that some of the older internal Intel video has some drivers that can be downloaded from the Intel web sight that can help with this. Also check your BIOS and see if there is a setting that will let you increase the amount of RAM that is allotted to the video as this would help as well.

Try using a different browser. On my computer in Chrome, some pages give me a "sorry, your computer can’t use WebGL but running the same page in Edge works fine.

Computer was sold in 2005. I think I’m just gonna have to bite rhe bullet and buy a pc.

@KaseyHellawell
Have you updated the java? easel wouldn’t work on my wifes comp had windows 8 fresh reboot it wouldn’t run easel! I did a update for java for another app and easel worked no problem after that not sure if easel uses java or not but its worth a shot. 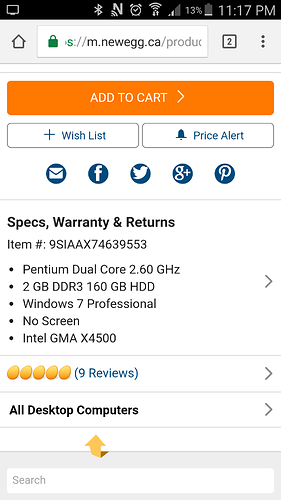 Update: thanks to Bob It looks like the Java download fixed the 2d preview. I think I can live withought the 3d preview as I am only using the pc as a sender and can preview everything on my main pc before I carve. The computer is fairly slow though so I think I’m gonna slowly buy some pc parts and build a mini atx pc so that I can speed things up and prevent crashing.

Glad it worked out for you

I fought this on an old computer too for days and found out it was definitely the video card. The driver software did not support the current standards so upgrading the video card brought all the needed drivers to use current software.