more on the left side… that “ridge” or line … I am going to sand it out but curious why its there. 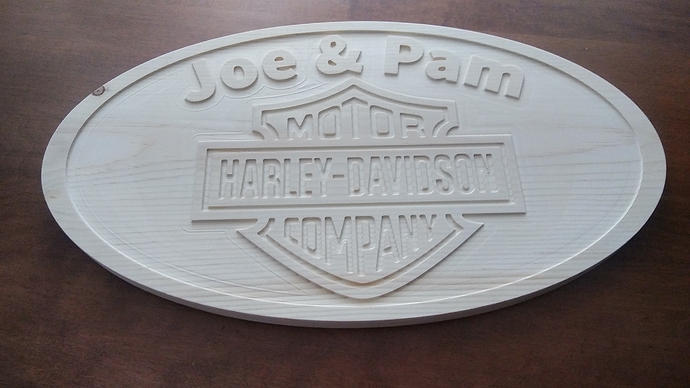 Read this may help a bit.
https://discuss.inventables.com/t/phils-help-documents-and-tutorials/29460/187?u=phantomm

Thanks for the responses… I appreciate them all!! my followup question is, if the machine is not setup correctly by not being flat or square, why would everything be very good except for that one pass where the ridge is? would the entire thing show signs of problems? I would really like to get this fixed so I don’t have to sand ridges after every carve… Thanks in advance.

p.s. I didnt read that link to square the xcarve but planning to read and apply to mine soon. sounds like there are many benefits to doing this.

Was this a 2-stage (multiple bits used) carve?

It was just one bit that did the entire carving in one shot… took 9+ hours to complete… its an 1/8 inch ball nose bit.

I occasionally get the same thing and i skim my wasteboard on a seasonal basis with changes in average humidity.
Looking at what I have gotten on my machine and what you have there, it almost looks like lost or added steps in the z axis. The bit plunges for a portion of the file, runs it, goes somewhere else and does it’s thing, comes back to the first area and continues but the depth is off by an unnnth (technical unit of measurement) and then you have this.

I have noticed this is more prevalent on longer carves but I have seen it on some shorter ones too.
I’ve never been able to track it down.

this makes sense because I believe that is where it stopped and moved to a different location and then came back… hmm anyone from Inventables can confirm? am I plagued with this forever? there must be a fix… maybe I have to mess with the tool path so it cuts more sequentially.

I had similar issues that I called “pencil lines” in my case it occurs when the bit deflects under load during a cut causing it to be at a slight angle and cutting at a different depth then the rest of the passes. This tended to occur during the first cut when the bit was under 100% load.

So doing things that can lower the load on your bit may help. Depth of cut seems to have a really big impact.

I did a few things to fix it on mine.
1 - I went with a stiffer gantry so it would not flex as much.
2 - I used a shorter bit when possible.
3 - I changed my cut strategy in VCarve so that instead of doing outlines that followed the curve of the object, it did a simple back and forth. This added some time to the carve but eliminated a lot of the issue.
4 - I added a quick rouging operation with the smaller bit, leaving behind a very thin bit of material (0.4mm), so that for the final cut so little is left that any load on the bit is minimal.

this makes sense because I believe that is where it stopped and moved to a different location and then came back… hmm anyone from Inventables can confirm? am I plagued with this forever? there must be a fix… maybe I have to mess with the tool path so it cuts more sequentially.

Seems one of two things is happening.

I’ve never been able to track it down.

I have tracked it once. Its from a super long carve at lower stepping (1/2 on z) and the little tiny bit of steps per mm (.001) that can go missing here and there. But after 9 hours the error stacks to a visible error.
Solution is better clean up at full doc or get a much tighter tuning on the z with a .0005 indicator.
Option two is a tiny bit of of his bit broke off and is now cutting funny.
Edit:
I just took a closer look and saw something.
Are the cuts on the clean up a little bit deeper?
If so I suspect that as you removed a ton of the wood away it may have naturally curved and relaxed up causing a slightly deeper cut on the cleanup final path.
Let me know if I’m close.

Error stacking seems plausible since I this tends to appear on longer carves.
Material flex may be less likely since some of the pieces I have done were smaller and thicker therefore more dimensionally stable.
I do wonder a bit about compression of the wood fibers, but this would be more widespread over the entire cut area and not so well defined as what we are seeing here.
I think when I get back into the shop I may run a sample and then run a finishing pass to see if it makes a difference.

I thing it’s also lack of center hold down. I bet on a vacuum table the same issue disappears.

Just for FYI: Here is a thread where I get more into my problem with “pencil lines”

Love the carve! I have been playing around with soft woods because I don't want to waste the good stuff on tests and learning projects. But the hardwoods look and feel sooooo much nicer!

I was looking at first small oak box I made and even with it's flaws I really like the way the oak looks and feels. ... It is hard for me to see in your pic, but it looks like you have a "pencil line" just inside the inner edge? Where VCarve makes the first cut of the finishing pass? Is that what…